Random race, or Why you gotta love racing, #1

There’s a lot of debate these days about racing quality versus quantity, about whether there are too many races involving too many bad horses on too many cards at too many tracks. 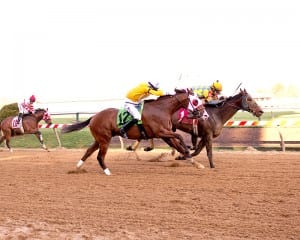 Xavier Perez and Spicer Cub with one last try at a “miracle.” Photo by Jim McCue, Maryland Jockey Club.

Like Saturday’s eleventh at Pimlico, an off-the-turf maiden claimer for three and up.  Mary Eppler trainee Spicer Cub, with Xavier Perez aboard, was, in his eighth career start, a likely enough candidate for win honors; and the bettors sent him off at 2.40-1.  He quickly took control of the race and led the field into the far turn.

Which is when the fun began.  First, the horse blew the turn, bolting nearly “out to Northern Parkway,” as Pimlico announcer Dave Rodman put it.  Then, straightened away in the six path and back in the lead, Cub took another detour.  Let Perez, the rider, tell it:

“It was wild. He didn’t give me any warning, especially the second time and went straight for the gate,” Perez said. “My life went before my eyes for a few seconds. I was thinking about bailing but saw there was enough space between the gate and the rail to get through, so I grabbed his mane and hoped for the best. Once we cleared the gate he re-broke again and almost won the race. It was really close. In fact, Forest Boyce (who was aboard Turbin) congratulated me after the wire.”

Rodman, meanwhile, channeled his inner Al Michaels for the stretch run.  When Spicer Cub cleared the gate and made his last-gasp run, Rodman called, “Do you believe in miracles?”

Perhaps no miracles on this day, nothing more than a four year-old maiden, a journeyman jock, and one wild ride giving us one more reason you gotta love racing.