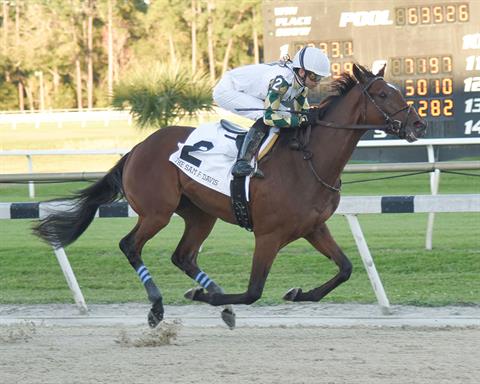 Tiz the Law may be a solid favorite for Saturday’s Triple Crown-kickoff Belmont Stakes — the Barclay Tagg trainee is 6-5 on the morning line — but there’s no shortage of hopefuls looking to upset the New York-bred’s apple cart.

Foremost among those is Sole Volante.

Sole Volante returned off a three-month layoff to best a six-horse optional-claiming field by three-quarters of a length on Wednesday at Gulfstream. That win showed trainer Patrick Biancone that the ultra-consistent son of Karakontie recaptured his early year form when he won the Grade 3 Sam F. Davis in February at Tampa before running second to King Guillermo in the Grade 2 Tampa Bay Derby on March 7.

“He arrived last night and ate everything this morning. So far, so good,” Biancone said. “He’s very talented. He’s been very good for us and trains his best all the time. We’ll see how good he is Saturday. No question, Tiz the Law is the horse to beat, but he totally [deserves] this opportunity.”

Dr Post was given a seven-month respite off a fourth-place debut last July at Belmont and returned by winning a seven-furlong maiden sprint on March 29 at Gulfstream. The Quality Road colt was moved up to stakes company last out, overcoming a troubled trip to win the 1 1/16-mile Unbridled on April 25 at Gulfstream.

“I think there’s a lot of talent there. I was very impressed by his maiden win,” said Pletcher. “With the amount of adversity he overcame in the Unbridled, it seems like he’s made a lot of progress in a short period of time. He’s a big, strong horse that seems to be improving. This is a big jump up in class and he’s a little light on seasoning, but he seems to have the talent.”

“Before Saratoga last year, we felt like he was one of our more promising 2-year-olds,” said Pletcher. “He had a bit of a setback after his maiden race, but he’s one we’ve always seen a lot of potential from.”

His stablemate, Farmington Road, has one win in six starts but has made his last three starts at the new Belmont distance, including a second in the Oaklawn on April 11 before running fourth in a division of the Grade 1 Arkansas Derby on May 2.

Pletcher said the late-running colt would benefit from a solid early pace.

Farmington Road and Dr Post worked a half-mile in company in 48.87 seconds on the Belmont Park main track Saturday.

Pletcher said he was impressed by how Farmington Road is training into Saturday’s test.

“He’s training great into this race,” said Pletcher. “I thought his breeze over the track was very good. It seems like he’s in good form at the moment.”

George E. Hall’s Max Player enters with a brief but impressive resume, going 2-1-0 in three starts, including back-to-back wins. Trainer Linda Rice, who will be looking to become the first female conditioner to win a Belmont Stakes, saw Max Player break his maiden by 4 ¼ lengths on December 17 at Parx and follow with a 3 ¼-length win in the 1 1/8-mile Grade 3 Withers, a Kentucky Derby prep race, in his 3-year-old bow on February 1 at Aqueduct.

“It would be great to win a Belmont or any Triple Crown race,” Rice said. “[The Withers] was on February 1 so we’re looking at four and a half months. He has improved dramatically in his training the past 60 days. I’m excited about running him this week.”

The son of Honor Code is listed at 15-1 and will depart from post 3 in tandem with Joel Rosario, who will be in search of a third Belmont Stakes after wins last year with Sir Winston and in 2014 aboard Tonalist.

“He was never very tactical before,” Rice said. “We had to work him in company with another horse to get him to perform and get enough out of his workouts. At this point, he’s seasoned, he no longer needs any company and he relaxes early in his workouts. When we ask him to respond, he responds, so we’ve been very happy with him.

“I would prefer to be little further to the outside with a horse that doesn’t like kickback but we are where we are,” she added.

Pam and Martin Wygod’s Modernist has also earned a winner’s circle trip in a graded stakes. Trained by Hall of Famer Bill Mott, who won the 2010 Belmont with Drosselmeyer, Modernist broke his maiden at third asking in January at Aqueduct and used that as a springboard to capture a division of the 1 1/8-mile Grade 3 Risen Star on February 15 at Fair Grounds.

The Uncle Mo colt ran third in the Grade 2 Louisiana Derby last out on March 21, earning a personal-best 85 Beyer Speed Figure, and will be returning to Belmont for the first time since running fifth in his debut in September.

Listed at 15-1, Modernist drew post 4 with Junior Alvarado on the call.

Hall of Fame trainer Steve Asmussen, who won the 2016 Belmont with Creator, will saddle a pair of entrants in Calumet Farm’s Jungle Runner and Winchell Thoroughbreds’ Pneumatic.

Pneumatic [8-1] has made just three starts and won two of them. Graduating to stakes company last out, the son of Uncle Mo ran third in the Grade 3 Matt Winn on May 23 at Churchill. Ricardo Santana, Jr. will have the call from post 10.

Jungle Runner, the winner of the Clever Trevor as a sophomore, will be looking for his first blacktype in four starts as a sophomore, entering off an eighth in a division of the Grade 1 Arkansas Derby. New York native Reylu Gutierrez will have his first mount in a Classic, drawing post 7. The son of Candy Ride is listed at 50-1.

Trainer Mark Casse, fresh off his election into the Hall of Fame, will look to repeat in the Belmont after winning last year’s edition with Sir Winston. Casse, who also saw War of Will win the 2019 Preakness, will be going for his third Classic win in two years with Live Oak Plantation’s Tap It to Win.

The Tapit ridgling is on a two-race win streak against allowance company and will run in a graded stakes for the first time since running 10th in the Grade 1 Breeders’ Futurity in October at Keeneland. Tap It to Win, at 6-1, will have the services of Hall of Famer John Velazquez, making his record 24th Belmont start, from post 1.

“We’re the speed in the race so the rail shouldn’t hurt us as much as it might’ve hurt other horses in the race,” said Casse assistant Jamie Begg. “There’s speed outside of us, so it’s not favorable necessarily, but I feel like with his style of running it shouldn’t make as much of a difference.

“He came out of his last race great,” Begg added. “Initially the plan was to see if we could get his energy up coming back in two weeks, but the horse hasn’t missed a beat and is probably training better coming out of that race than he was going into it. We’re pretty excited.”

Reddam Racing’s Fore Left, a bay son of Twirling Candy trained by Doug O’Neill, was expected to sprint seven furlongs in Saturday’s Grade 1 Woody Stephens presented by Claiborne Farm before the connections decided to take a run at the Belmont.

Fore Left, who made eight juvenile starts, graduated at first asking in May 2019 at Santa Anita and followed up in June 2019 with a 4 ½-length win in the Tremont, a 5 ½-furlong sprint at Saratoga Race Course.

The versatile bay stretched out in distance in his next two starts at Del Mar finishing third in the six furlong Grade 2 Best Pal and fifth in the Grade 1 Del Mar Futurity at seven furlongs. After an off-the-board effort in the 1 1/16-miles American Pharoah in September at Santa Anita, Fore Left returned to sprinting with a win in the 6 ½-furlong Sunny Slope in October at Santa Anita and a third in the six-furlong Golden Nugget in November at Golden Gate. He completed a lengthy campaign with a tenth in his turf debut in the Grade 3 Cecil B. DeMille in December at Del Mar.

Fore Left made a victorious seasonal debut last out in the Group 3 UAE Two Thousand Guineas in February, a one-turn mile at Meydan Racecourse.

Assigned morning-line odds of 30-1, Fore Left will emerge from post 6 under Jose Ortiz, who won the 2017 Belmont aboard Tapwrit.