Naughty Thoughts gets nod as fave in Beyond the Wire 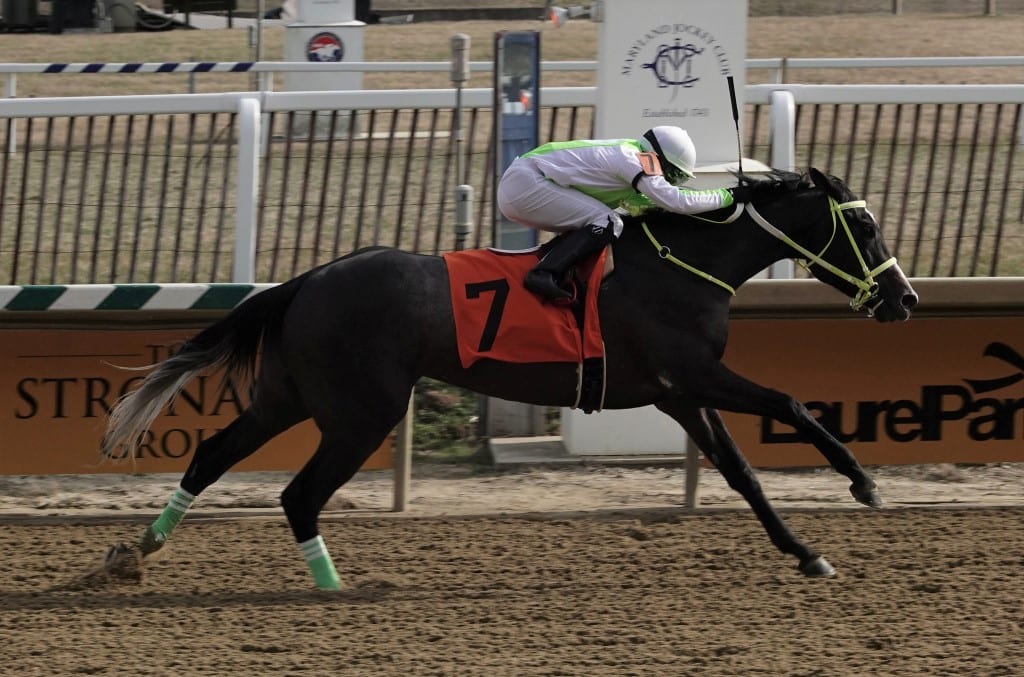 Rafael Lopez’s Naughty Thoughts, a dominant winner of the seven-furlong Wide Country last out to give trainer Jonathan Maldonado his first career stakes victory, returns to Laurel Park looking for a repeat performance in the $100,000 Beyond the Wire. She’s the 5-2 morning line favorite.

Claimed for $25,000 out of a win last fall, Naughty Thoughts had finished third in a pair of stakes at 2 before breaking through with a 4 ¾-length triumph Feb. 15 at Laurel, where she owns four wins, four seconds and three thirds in 13 lifetime tries.

“I wasn’t surprised that she won the race because I thought she was capable of doing it, but definitely I was impressed the way she did it. Obviously, the favored horses didn’t show up that day but she just galloped. The way she did it I was really impressed and really happy,” Maldonado said.

In two previous tries at one mile, Naughty Thoughts was a 4 ½-length winner in the slop in December and lost by a head to Ankle Monitor in the mud Jan. 19. Ankle Monitor returns in the Beyond the Wire joined by stablemate Princess Cadey from the barn of winter meet-leading trainer Claudio Gonzalez.

“I don’t have any problem with the distance. I think she can handle it. I think she’s going to be a better horse going longer,” Maldonado said. “Obviously we’ve got some fillies in there that we didn’t run against last time like Claudio’s filly who beat me at the wire last time that we met. This filly has been different since then. She’s working really, really different. I think this filly is getting better and better.”

Alejandra Gonzalez’s Ankle Monitor (5-1) returns to her home track where she owns three wins and a second from six starts after a disappointing fifth in the 1 1/8-mile Busanda Feb. 2 at Aqueduct, matching the lowest finish of her nine-race career.

“The race doesn’t count because up there the track is really different than Laurel, and if a horse doesn’t like it over there they don’t try at all,” Claudio Gonzalez said. “That’s what happened. She didn’t like the track. But she came back good after the race and everything was OK.”

Ankle Monitor finished second, 1 ½ lengths behind Beyond the Wire rival Bella Aurora, in the seven-furlong Gin Talking Dec. 28. She is two-for-three at the distance, both wins coming at Laurel.

“I like the distance because she closes and the mile is a long stretch; that’s why I love the distance for her,” Gonzalez said. “She loves Laurel and I believe she’s going to be going better going longer.”

Magic Stable’s Princess Cadey (4-1) was second, beaten 4 ¾ lengths, in her stakes debut in the Wide Country. She has won twice in four tries since being claimed by Gonzalez for $16,000 in December at Laurel.

“The last race I ran her right back in two weeks. It was so close, but she ran really good that day. Now she’s had a little more time from the last race, and I like that. She’s done everything right up to now and she’s very happy,” he said. “She’s getting better and better every race. I hope now she improves a little more and maybe we can win the race. I think with both fillies I have a chance to be there.”