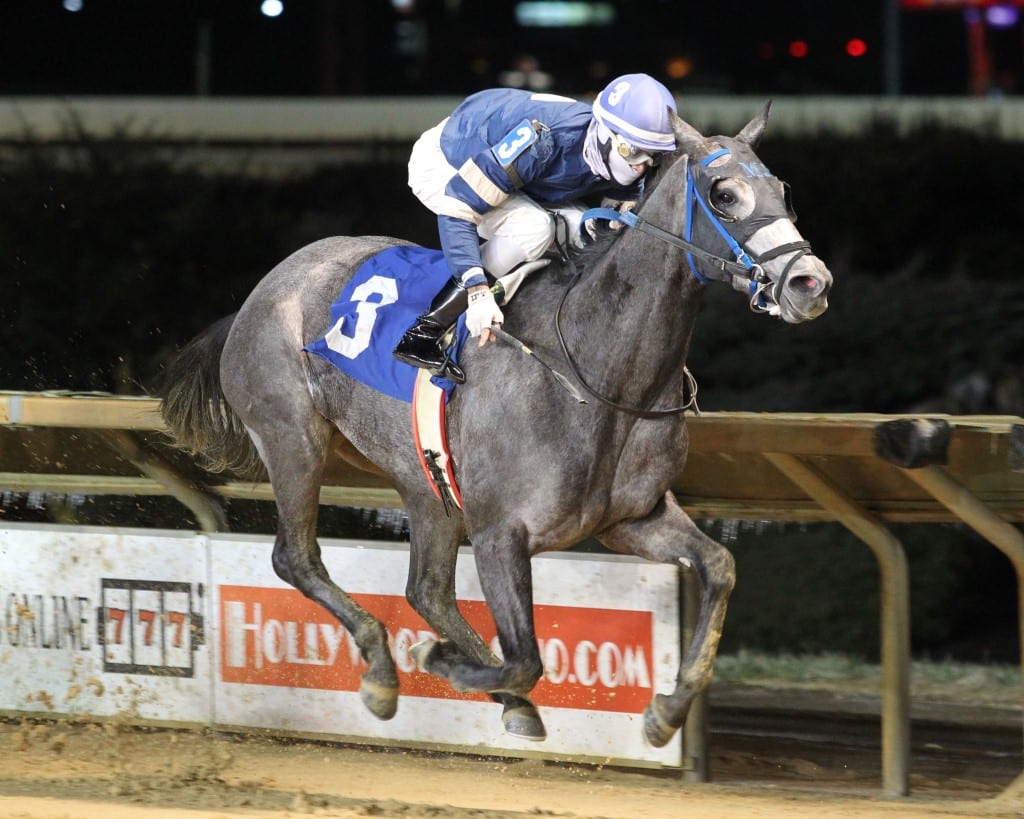 With two 2020 stakes in the book at Charles Town Races, a pair of trainers — connected in an interesting way — have recorded their first career stakes victories, as did their respective runners.

On the first Saturday of the racing season back on January 11, Mean Bean rallied from just off the pace to forge a 45-1 shocker in the $35,000 Mint Mission overnight stakes for owner-trainer and Ranson postal worker, Glenn Harrison. One week later in the $35,000 White Alley overnight stakes for fillies and mares, Sherwood Lady led throughout over a muddy track to post a 9-1 upset for trainer Michael E. Jones, Jr., providing both horse and conditioner with their first stakes tally.

Mean Bean, an eight-year-old Garnered gelding that Harrison owns and trains, kicked off his 2020 campaign with his first stakes score, and he now sports a 9-12-6 slate and nearly $233,000 banked from 37 career tries. Mean Bean has tried state-bred stakes company sparingly during his career, but in the Mint Mission, he rallied willingly in the lane to prevail by a half-length while getting the 6 1/2-furlongs in 1:19.93.

“I was very excited to see him win that stakes,” Harrison said of Mean Bean. “The race actually set up exactly like I thought it would. I knew there were some horses coming out of the 4 1/2-furlong races that would provide the early speed, but I figured they would tire. I was just hoping Mean Bean could make his move and then be able to hold off Aaron’s Tap. I thought Jeff’s horse was the one to beat in there. When my horse took the lead turning for home I knew he would win it.”

Harrison now sports 116 wins and nearly $1.1 million banked from 1,005 starters, and Mean Bean has accounted for nearly one-fourth of that bankroll. Harrison noted that the Garnered gelding could run next in the John B. Campbell Stakes at Laurel Park on February 15 or perhaps an open allowance event at Laurel or Charles Town.

“Never in my wildest imagination did I ever think that Mean Bean would do that well in his career,” Harrison said. “He’s always shown me that he had plenty of ability and I knew he was going to be a good horse. But for him to win a stakes race is something special. Like I told my wife [Kathy Harrison], watching him run is really like a dream come true. I wasn’t totally surprised that he won the [Mint Mission] stakes, but I was shocked that he was 45-1. I thought he would be 20-1, maybe 25-1 at the most.”

Jones, trainer of Sherwood Lady, had initially purchased Mean Bean as a weanling from his breeder, the late Jessica Ryan Loy, and later sold a half-interest to Harrison. Before the horse turned three, Jones would eventually sell his other half-interest to Harrison, and the gelding has developed into a talented sort. Harrison and Jones have remained close friends, and one week after Harrison notched his first stakes tally as a trainer with Mean Bean, Jones followed suit with Sherwood Lady.

In the White Alley overnight stakes for fillies and mares, Sherwood Lady gained command soon after the break and led throughout while outlasting the late bid of 1-2 favorite She’s Quiet for a half-length score in 1:20.50 for a mild 9-1 upset. Sylvester Carmouche was in the irons.

The five-year-old daughter of Fiber Sonde, trained by Jones for owner Top Notch Racing, was bred in West Virginia by John McKee. She now owns a solid 8-3-1 slate and just over $150,000 banked from 28 career outings after notching her first stakes victory and that of her trainer as well.

“It was definitely a very exciting night,” said Jones, who has now saddled 66 winners from 926 starters with earnings of just over $1.3 million. “Going into the race, there were a few scratches, and I knew my filly had the chance to make the lead. I thought that if she could relax early, she would be very tough to beat late. She made the front and Sylvester did a great job rating her and she had enough left to hold off She’s Quiet.”

Like Harrison, Jones said he is looking for another race for Sherwood Lady before trying her in a state-bred stake for fillies and mares on the undercard of the Grade II, $1 million Charles Town Classic on April 18.

“She came out of the race really good,” Jones said. “I think she will continue to do well in the local stakes. I’m pointing her for the West Virginia-bred stakes on the Charles Town Classic day. I might even consider running her in one of the three-turn races up there this year. She’s good leaving the gate and she can relax and sit off of horses. If she can rate, I think she can even do well going the longer races around three turns up here.”