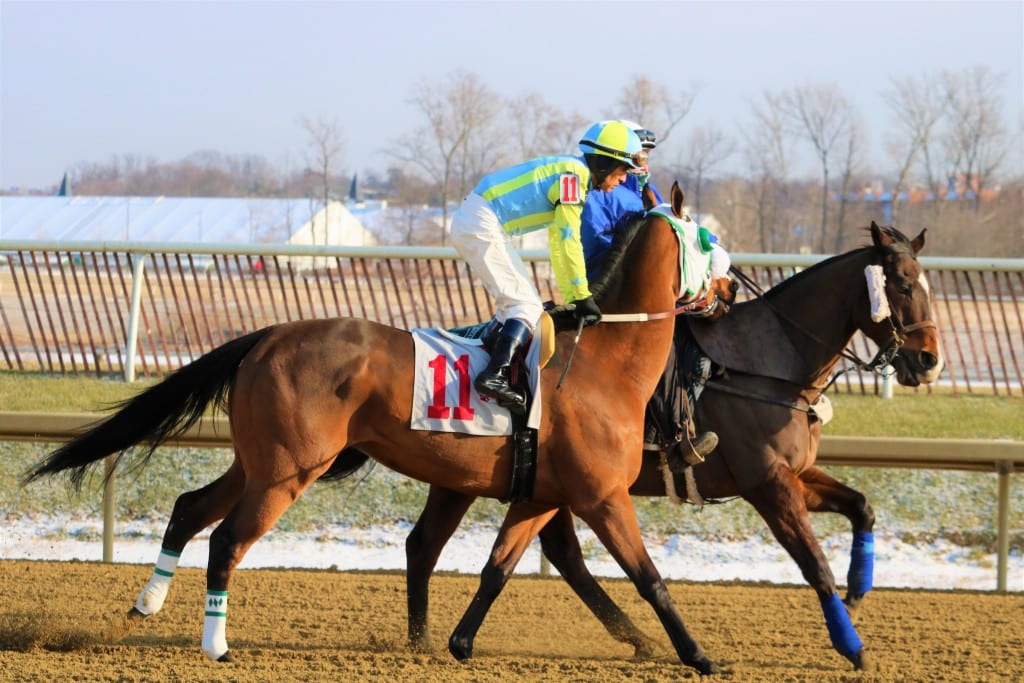 John Jones prior to winning the 2017 Jennings Stakes at Laurel Park. Photo by Dottie Miller.

Matt Schera’s John Jones, a stakes winner on both turf and dirt for trainer Lacey Gaudet, will be racing at his favorite course and distance as he goes after a third career victory in the $75,000 Jennings.

John Jones finished third or better in five of nine starts last year with two wins, one of them coming Aug. 17 in track-record fashion for a mile on dirt at Colonial Downs. It followed a season where he was winless in eight tries and was his best campaign since winning six of 13 races and more than $250,000 in 2016.

“In 2018, he didn’t win a race. Then to come back and have such a great campaign in 2019, it’s so much fun,” Gaudet said. “He always tries. If it’s a race where he gets beat or he’s off the board, it’s no fault of his own. He just had such a wonderful campaign last year and I think a lot of the spots really lined up for him. He loves that one-turn mile at Colonial. It was a fun year for him and I really hope he can follow it up in 2020.”

“We had for months kind of planned that the race was going to be in December, but really a difference of 18 days is not a problem. He had a nice little blowout [Tuesday] morning and he’s all prepared for it,” Gaudet said. “He’s primed and ready to go.”

In his most recent race, a third-level optional claimer Dec. 14 at Laurel, John Jones took a short lead into the stretch but wound up second by a length going seven furlongs over a sloppy, sealed track. He is 10-for-30 lifetime at Laurel, and eight-for-14 for his career at the one-mile distance.

“I’m excited,” Gaudet said. “I think the steps that we’ve taken with him to cut back a little bit and now stretching him back out to a mile, I hope it’s going to help him. I think that it will.”

Among John Jones’ foes will be Runnymede Racing’s multiple stakes winner Alwaysmining (8-5), making his third start off nearly a five-month layoff. The 4-year-old Stay Thirsty gelding was beaten two lengths when fifth in his return in the six-furlong Howard and Sondra Bender Memorial Dec. 7, then was second to another son of Smarty Jones, Someday Jones, in the 1 1/8-mile Native Dancer Dec. 28.