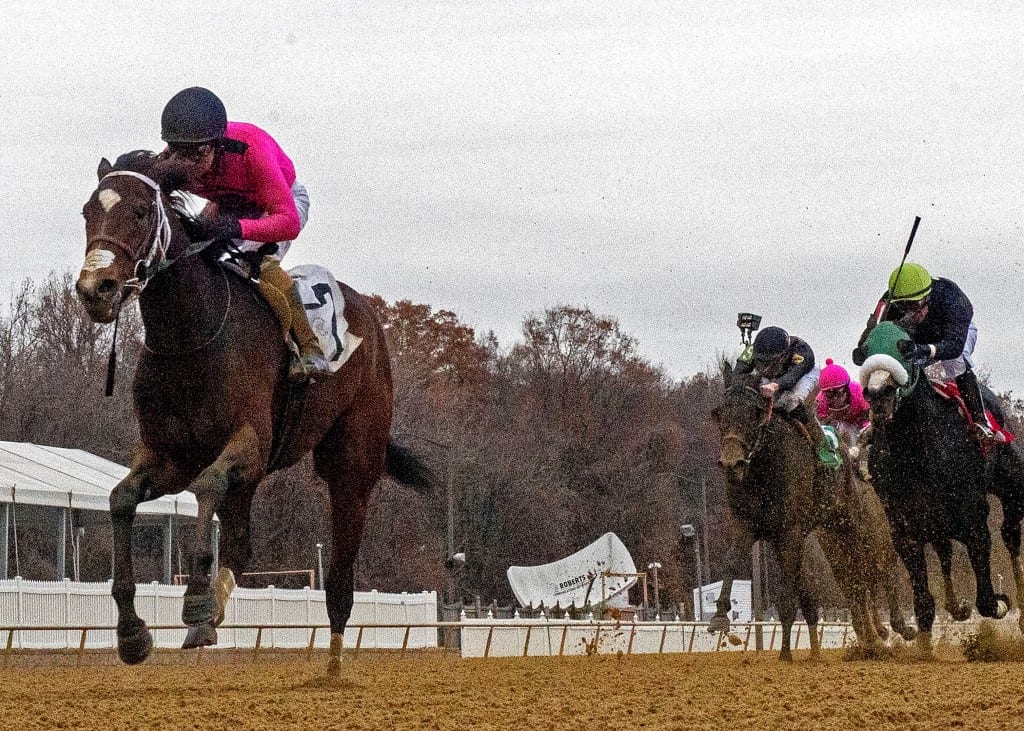 Needs Supervision was much the best in the Safely Kept Stakes at Laurel Park. Photo by Maryland Jockey Club.

In the first of the four stakes, the $100,000 City of Laurel, Honest Mischief (Trevor McCarthy) benefited from patient handling down the backside and through the far turn, found racing room late after Chilly In Charge surged to command a furlong out and then wore that one down in the final 100 yards for a neck score in 1:23.06 for the seven furlongs.

“I really wasn’t worried,” McCarthy said of being in behind horses on the far turn. “I knew that I had plenty of horse under me, so I was just waiting for a little seam. I thought [Amundson] was going to run a little better, so I was waiting on him. But he was all-out on the far turn, so when [Chilly in Charge] made his move I went with him. I got after my horse a little bit left-handed when we straightened away, and that seemed to wake him up. It was great being able to ride something for Chad Brown and Juddmonte Farms.”

One race later in the 1 1/16-mile, $100,000 Thirty Eight Go Go Stakes for fillies and mares three and up, Vault (Jose Hernandez) easily lived up to her role as the 6-5 favorite when she drew clear in the final furlong to a three-length score. One of three fillies in the race for Penn National-based trainer Bernie Houghton, Vault recorded her first stakes tally and third straight win overall and now boasts a 5-4-1 slate and $190,000 banked from 13 career outings.

“My only instructions to Jose in the paddock were to be aware that this track has a long stretch,” said Houghton, recently of Crabcakes fame. “I didn’t want him to move with her too soon. I thought she would do well stretching out. I was considering going in the seven-furlong race [the $100,000 Safely Kept Stakes] but this looked like a little softer spot. Besides, I wanted to stretch her out a little. She’ll get two months off now, and we’ll go to Florida and then hope she comes back better as a four-year-old.”

McCarthy struck for a second time in the $100,000 Richard W. Small Stakes for older runners traveling 1 1/8 miles. He and Sunny Ridge benefited from a ground-saving journey through the early stages as Han Sense set dawdling early splits of 25.89, 50.91 and 1:16.24 through the first three calls. Sunny Ridge, a New Jersey-bred millionaire, angled out turning for home and wore down the leader in the lane for a half-length score in 1:51.88. A six-year-old Holy Bull gelding trained by Jason Servis for owner-breeder Dennis Drazin, Sunny Ridge notched his second win in seven starts this year and now owns an 8-6-6 slate over $1.4 million banked from 28 career tries.

“He broke well and I was able to sit just off the leader and save ground through the first turn and down the backside,” McCarthy said. “We really were not going much, so I was just waiting for racing room. At the top of the stretch, I thought I had enough horse to get by the leader. He finished up well.”

In the $100,000 Safely Kept Stakes for three-year-old fillies going seven panels, Needs Supervision (Feargal Lynch) closed from mid-pack to notch her second career stakes victory. She launched her bid widest of all on the far turn and overhauled the leaders in the lane for a three-length score in 1:23.51. A sophomore daughter of Paynter trained by Jeremiah O’Dwyer for Howling Pigeon Farms LLC, Gary Barber, Wachtel Stable, and Madaket Stable, Needs Supervision notched her second win in five starts this year and she now owns a 4-2-0 slate and over $250,000 banked from eight career outings.

“When you look at her last couple of races, you have to throw out the [Grade 2] Raven Run,” O’Dwyer said, referring to her seventh-place finish. “That race came up tough, and she didn’t break well and she had trouble midway through. Today she just ran her race and when she came back to the winner’s circle, she could not blow out a candle. Feargal fits her perfect – he’s got lovely hands.”

Lynch had been aboard Needs Supervision when she was seventh in the Raven Run at Keeneland and second in the Weather Vane Stakes at Laurel and said this was her best effort in his three mounts aboard the Paynter filly. Lynch expected the Safely Kept would be filled with speed, which helped Needs Supervision to pick up the pieces on the far turn.

“One thing about this filly is she doesn’t break all that well,” Lynch said. “But she’s really good once she levels off. I thought there was going to be a lot of pace up front and when we turned for home my filly was going so easily, I knew she could get there. Jerry [O’Dwyer] always does a great job with the horses. I’ve known him a long time now and he works hard and always has them ready to run.”