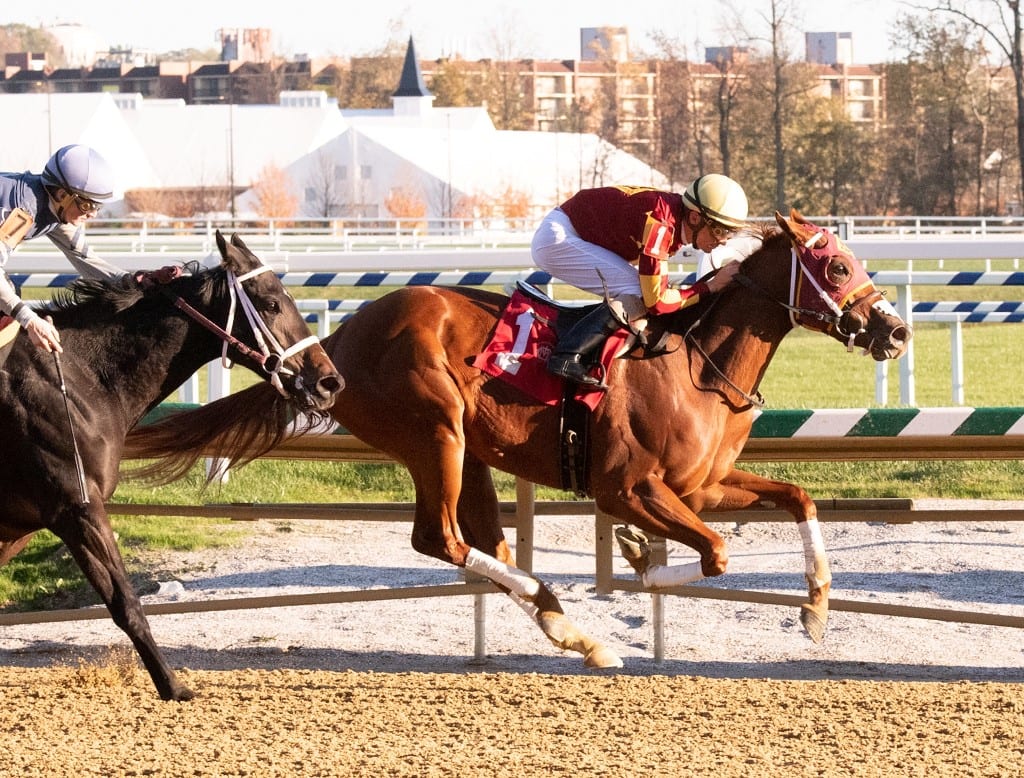 The 23rd running of the Smart Halo for 2-year-old fillies and the eighth renewal of the $100,000 James F. Lewis III for 2-year-olds, both at six furlongs, share top billing on a nine-race Military Family Appreciation Day program.

Designated Hitters Racing’s Ilchester Cheetah, a New York-bred daughter of Grade 1-winning millionaire Itsmyluckyday, has raced three times at Laurel without a loss, each win coming in front-running fashion, two of them at the Smart Halo distance.

After debuting with a head triumph in a maiden special weight Aug. 15, each of Ilchester Cheetah’s last two wins have come for a tag. She won by three lengths in a $30,000 claimer going 5 ½ furlongs, then was in for $62,500 in a three-quarter-length optional claiming allowance Nov. 1.

“Experience helps. She’s had four runs now and she’s unbeaten here at Laurel, which is nice. Whether she’s good enough for the step up in class we don’t know, but we’ll give her a shot in there and see whether we go back to allowance company or keep her at that stakes level,” O’Dwyer said. “She’s really stepped up and improved with every start.”

Ilchester Cheetah has tried stakes company before, shipping to New York to face fellow state-breds in the seven-furlong Joseph A. Gimma Stakes Sept. 18, trailing throughout under Laurel-based jockey Feargal Lynch and finishing last of six in just her second lifetime start.

“We took a chance and ran her in the New York-bred stake. It was seven furlongs and I was worried if she was going to get that distance. I kind of spoke with Feargal and said to just let her break and take your time with her, and she just did not like that dirt in her face or that style of running at all,” O’Dwyer said. “I take full responsibility for that. For just her second start to ship up to New York wasn’t in her favor, either, not knowing where she is and things like that.

The outcome may have been a blessing in disguise for Ilchester Cheetah, affording her a class break and allowing her to take a two-race win streak into the Smart Halo.

“Her bad run in New York kind of worked to our advantage because we were able to drop her down in grade and get a little confidence boost, and that’s what she did,” O’Dwyer said. “She won well back down for the claiming 30 and then we were able to run her in the allowance next time. I was just happy with how she did that in her last start. The horse was coming to her and she never really looked like she was going to get beat.”

Sheldon Russell, leading Laurel’s fall meet standings with 26 wins, has the call for the third straight race from outside Post 8. All fillies will carry 124 pounds.

Haymarket Farms’ homebred Cruise and Danze didn’t make her debut until Oct. 4, starting slowly and racing five wide to finish fourth in a six-furlong maiden special weight at Laurel. O’Dwyer went back to basics with the Danza filly in the morning following the race.

“She’s always worked well and I’ve liked her. She kind of fluffed her lines first time out, missed the start and kind of rushed up there and ran out of a bit of steam,” he said. “But she redeemed herself. We took her back and broke her from the gate again and she broke good, and then she came out the second time and broke well.”

In her second start, Cruise and Danze led at every call after breaking cleanly from the rail under Russell and holding on for a neck maiden special weight triumph going 5 ½ furlongs Nov. 1 at Laurel. She drew Post 4 for the Smart Halo with Feargal Lynch aboard.

“She still showed plenty of speed and I thought she was getting a little leg weary coming to the line, but Sheldon was adamant that she had more left in the tank when that other horse was coming to her,” O’Dwyer said. “I was quite confident for her second start that she’d break good because first time, they can be breaking good at home and then come race day it’s a whole different atmosphere, a different vibe.

“Sometimes they get a little caught off guard when they’re trying to take it all in. I think that’s what happened to her. The other horses broke and she was kind of left standing there wondering what was going on and then she came out and it’s hard to make up a lot of ground and sustain a lot of effort like that,” he added. “Second time out I was confident that she was going to break good. Even though she had the rail, I wasn’t too worried about it because she’d always broke so good in the morning. It caught me by surprise when she broke so bad first time.”

Also entering the Smart Halo off two wins is Stoneway Farm’s homebred Cofactor. Trained by Kelly Breen, who captured the 2017 Smart Halo with subsequent Grade 3 winner Take Charge Paula, Cofactor broke her maiden second time out Sept. 14 at Monmouth Park and won an optional claiming allowance Oct. 16 at Keeneland, by a neck and a head, respectively. Joe Bravo, up for both races, rides back from Post 2.