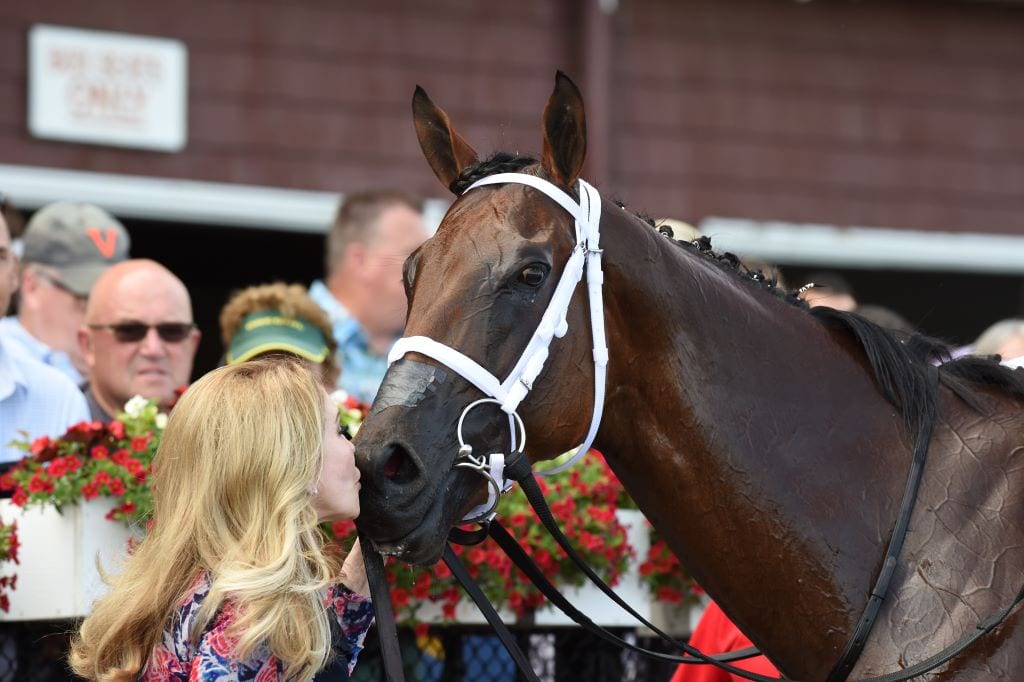 Owner Evelyn Benoit gives a kiss to Minit to Stardom after the Star Guitar filly won the G2 Honorable Miss at Saratoga. Photo by Susie Raisher.

Brittlyn Stables’ Minit to Stardom, winner of the Honorable Miss (G2) this summer at Saratoga, will be heavily favored making her first start in six weeks Friday, Nov. 8 to help Laurel Park kick off a special holiday week schedule.

Minit to Stardom, based at Delta Downs in Louisiana with trainer Jose Camejo, drew the rail and is the 3-5 program favorite in Friday’s sixth race, an open $55,000 allowance for fillies and mares sprinting six furlongs on the main track.

A 4-year-old daughter of four-time Louisiana-bred Horse of the Year Star Guitar, a winner of 24 of 30 career starts also campaigned by Brittlyn Stables’ Evelyn Benoit, Minit to Stardom hasn’t raced since finishing second to Come Dancing in the 6 ½-furlong Gallant Bloom (G2) Sept. 22 at Belmont Park.

“She’s doing really well, so we’re going to run in the race tomorrow and see how she comes out of it,” Camejo said. “After the race we’re headed for Champions Day at Fair Grounds in New Orleans.”

Camejo, a former jockey that won 130 races between 2003 and 2012, took over the training of Minit to Stardom this spring and saw the bay filly reel off three consecutive wins, all in front-running fashion under Laurel-based jockey Alex Cintron, capped by the six-furlong Honorable Miss.

Minit to Stardom prepped for the Honorable Miss with a 2 ½-length triumph in a 5 ½-furlong sprint over Laurel’s world-class turf course June 7. Her victory, Camejo’s second in a graded-stakes, came on Benoit’s birthday.

“After she ran on the turf at Laurel, she came out of the race like it was nothing. I was telling Alex and my owner that she was pretty much on fire, and I felt like I wanted to take a chance and go to a big race,” Camejo said. “We went to New York to find a graded-stake for the horse and the stallion, because [Benoit] still owns the stallion.

“When we were talking about it, I kept telling her, ‘You’re going to win tomorrow,’ and she was like, ‘We’ll see,’” he added. “I know she wasn’t expecting to win because it was a tough spot, a tough race, but everything went the way I expected. I think everything was meant to be.”

The connections decided not to point for the Breeders’ Cup Filly & Mare Sprint (G1) Nov. 2 at Santa Anita and give Minit to Stardom a brief freshening before bringing her back. Cintron will be up for the fifth straight time.

“Even though she was nominated for the Breeders’ Cup, we discussed it and [decided] it was far to go and those races take a lot out of the horses, and I think right now she’s in great shape,” Camejo said. “She’s on fire and I want to keep her running in races that don’t take too much out of her, and [the owner] agrees with me. She’s a great owner.

“[Minit to Stardom] is super special, you have no idea. Now I treat her more carefully trying to pick the right races and keep her sound,” he added. “She’s something special. I have to find the right race.”