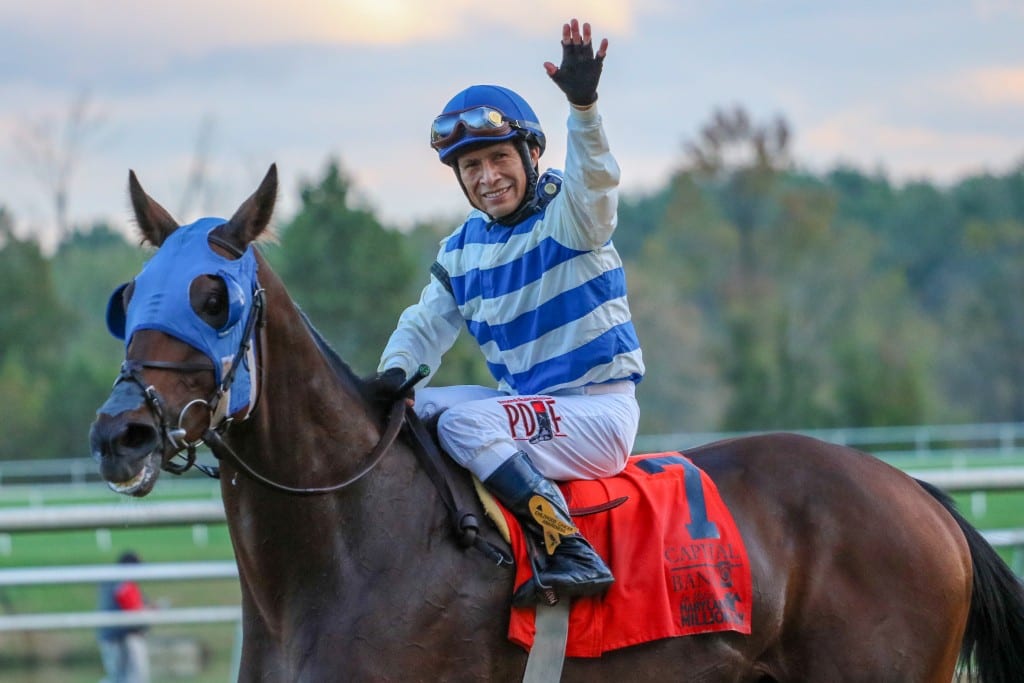 Edgar Prado waves to the crowd after Saratoga Bob won the 2018 Maryland Million Classic. Photo by Dottie Miller for The Racing Biz.

Four of the 12 races on the Maryland Million program, which also attracted four past Maryland-bred champions led by 2017 Horse of the Year Just Howard, are scheduled to be contested over Laurel’s world-class turf course. Entries and post positions will be drawn Wednesday, Oct. 16.

Bob Manfuso, Wayne Harrison and trainer Katy Voss’ Saratoga Bob came back after losing the lead at the top of the stretch for a half-length triumph in last year’s $150,000 Classic for 3-year-olds and up going 1 1/8 miles, the Maryland Million’s richest race. Bred by Manfuso and Voss, the 5-year-old Friesan Fire gelding has not faced stakes company in seven subsequent starts, with one win.

Jameela Stakes winner Ghoul’s Night Out, second by a half-length in the All Brandy; Goodonehoney, winner of the 2018 Weber City Miss on Laurel’s main track; and My Vixen and Penitence, second and fourth in last year’s Ladies, are also nominated.

Along with Saratoga Bob and My Sistersledge, other defending champions among Maryland Million pre-entries are Lewisfield in the $100,000 Sprint for 3-year-olds and up going six furlongs; Barin in the $60,000 Turf Starter Handicap; and Hashtag Selfie in the $50,000 Distaff Starter Handicap.

Most popular among horsemen with 34 nominations was the $125,000 Turf for 3-year-olds and up at one mile. Prominent among nominees are Just Howard, also Maryland’s champion grass horse and 3-year-old in 2017; Maryland’s 2016 champion older male John Jones, a stakes winner on turf and dirt; 2017 Turf runner-up Somekindofmagician; 2019 Find Stakes winner English Minister, whose four-race win streak was snapped last out in the Japan Turf Cup Sept. 28; and Saratoga Bob, who has a third in two career tries on grass.

No Guts No Glory Farm’s multiple stakes winner Anna’s Bandit, third in last year’s race, is among 28 fillies and mares 3 and up nominated to the $100,000 Distaff, a seven-furlong sprint on the main track. Other nominees include Goodonehoney; 2017 Nursery winner Limited View, the Maryland-bred champion juvenile filly of 2017; 2016 Distaff runner-up Cee Bee Gee Bee; and 2016 Lassie runner-up She’s Achance Too.

Miss J McKay, impressive winner of the Anne Arundel County Stakes named for the late Hall of Fame broadcaster who founded the Maryland Million in 1986; and stakes-placed Gifted Heart, Leaky Cauldron and Rising Bella are among 23 horses nominated to the $100,000 Lassie for 2-year-old fillies. Both the Lassie and Nursery are run at six furlongs.

Back for the third straight year are the $60,000 Turf Starter Handicap for 3-year-olds and up, which drew 20 nominations including defending champion Barin, and $60,000 Turf Distaff Starter handicap for fillies and mares 3 and older, both at 1 1/8 miles on the grass.

Hashtag Selfie is pre-entered to defend her title in the $50,000 Distaff Starter Handicap for females 3 and older, while past winners Helloitsme (2017) and Stolen Love (2015) are among 26 3-year-olds and up nominated to the $50,000 Starter Handicap, each contested at seven furlongs.

Edgar Prado became the Maryland Million’s all-time leading jockey in last year’s Classic, giving him 17 wins and moving him out of a tie with retired fellow Hall of Famer Ramon Dominguez. Dale Capuano, a winner of 3,451 career races, tops all trainers with 11 Maryland Million victories, one more than Hall of Famer King Leatherbury.