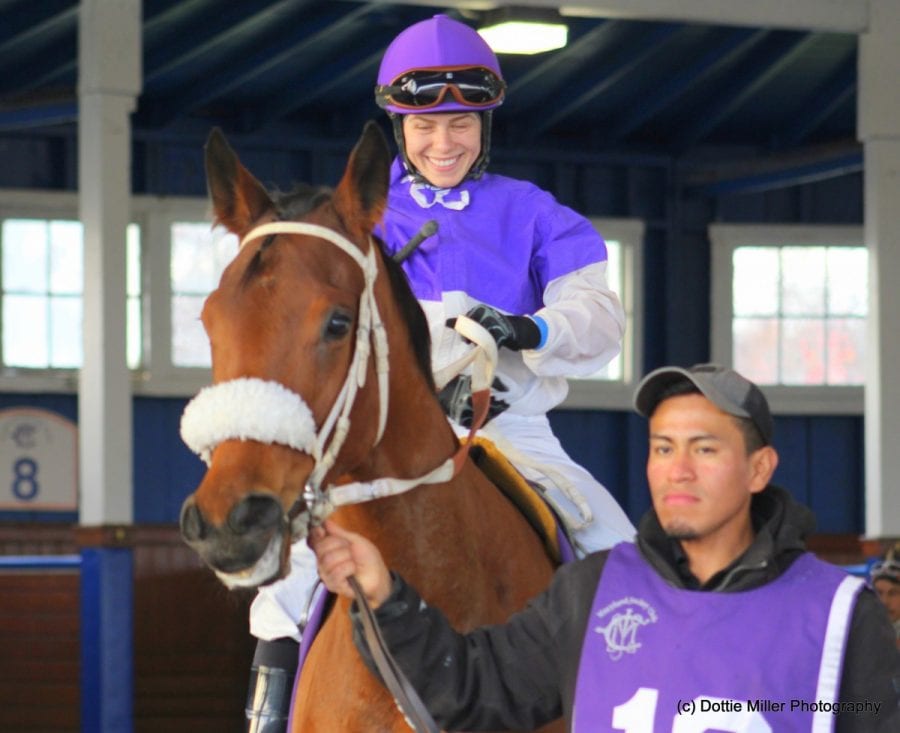 Photo by Dottie Miller for The Racing Biz.

STORY UPDATE: Both rider and horse are doing well. Trainer Hugh McMahon reports that Race Me Home, who rose and ran off after falling, cooled out well and was doing fine in the aftermath of the race. Race Me Home was claimed out of the race.

It was a spill that people on social media described as “very ugly” and “awful.”

Fortunately for jockey Katie Davis, the accident, which occurred Monday in the sixth race at Parx Racing, looked worse for her than it turned out to be, and by Monday evening, her agent, Jack Hurley, was able to describe her condition as “okay overall.”

The incident occurred during the sixth race on Monday at Parx, a $10,000 claiming race going a mile 70 yards on the main track. Davis was aboard the Hugh McMahon-trained Race Me Home. Sent off as the 9-5 favorite in the 10-horse field, Race Me Home raced in mid-pack through the early portions of the race.

Three wide, he was, according to the official chart of the race, “making a run at the leaders nearing the stretch” when he clipped the heels of Sunshine Wild and fell, throwing Davis to the dirt.

In a message Monday evening, Hurley wrote that Davis was “a little banged up, but she’s okay overall. Very sore and such, which is well expected.”

Hurley said that Davis would “most likely” be off her mounts for a few days. Race Me Home reportedly rose after the accident and “ran off into the backstretch,” according to Parx morning line maker John DaSilva.

Horse got up and ran off into backstretch

She enjoyed her best season in 2016, winning 73 races that year while posting purse earnings of more than $2.1 million. This year has been the second-best of her career thus far.

Katie is banged up, but overall okay. Very fortunate today ??. Thank you for concerns