Arrifana cruises as Rubley barn gears up for fall 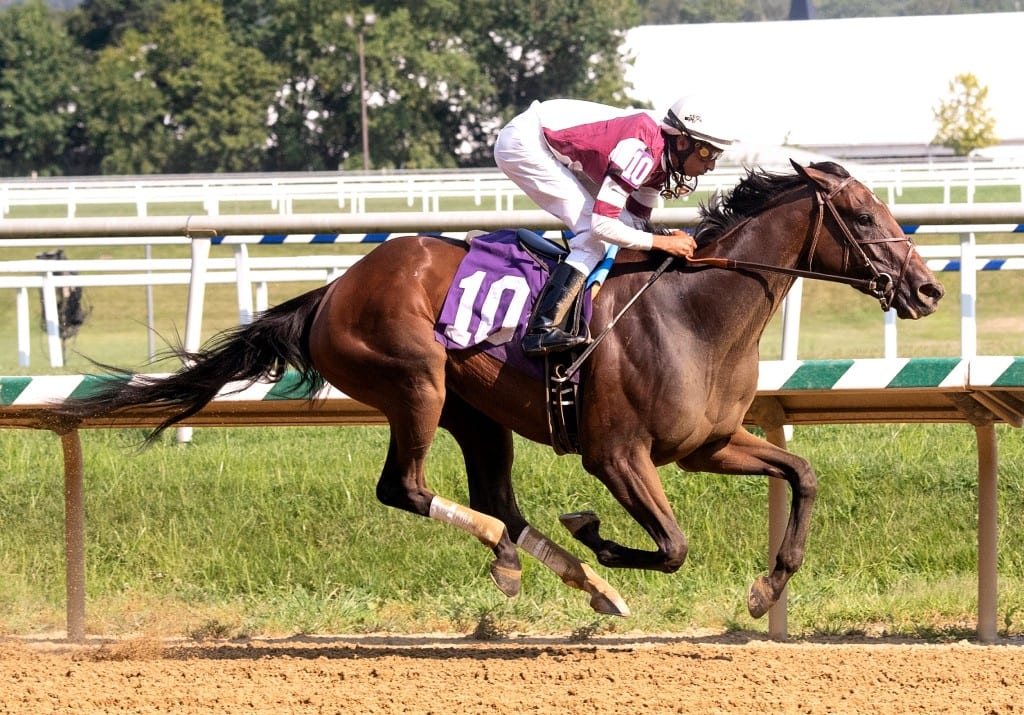 Arrifana ran her record to 3-for-3 with an allowance score at Laurel Park. Photo by Jim McCue, Maryland Jockey Club.

Multiple stakes winner Alwaysmining got trainer Kelly Rubley’s season off to a strong start, and she’s poised to close the year with another promising prospect in undefeated filly Arrifana.

Bred and co-owned by Gunpowder Farms with Millennium Farms, Gainesway Stable and LNJ Foxwoods, Arrifana ran her record to a perfect 3-0 in a dominating 5 ½-length triumph Sept. 28 at Laurel Park.

Confidently handled by jockey Julian Pimentel for the third straight race, and stretched out to a mile for the first time, Arrifana broke from the rail in the second-level optional claiming allowance for fillies and mares 3 and up but was content to let 14-1 long shot Conjecture take the lead through splits of 23.91 seconds, 46.21 and 1:11.85.

After applying moderate pace pressure, Arrifana edged up to the leader and was tipped four wide approaching the quarter pole to take over the top spot, gliding away from her seven rivals under a hand ride to win in 1:36.81 over a fast main track.

“We really like this filly. She has a lot of class, and I think this will be another confidence booster for her. She likes this track,” Rubley said. “We’ve known from a long time ago that she was going to be a nice filly and we took our time getting her here, and it’s paying off.”

A 3-year-old daughter of two-time Horse of the Year and 2014 Hall of Famer Curlin, Arrifana is out of the A.P. Indy mare Vaulcluse, a winner of her only three career starts capped by the 2008 Suncoast Stakes. She debuted with a 10-length maiden special weight romp Aug. 1 at Laurel then came back with a two-length score Aug. 31 at Saratoga despite getting pinched back at the start.

Each of her first two wins came going seven furlongs as the favorite. Sent off at 1-9 in her latest effort, she has beaten older horses in all three starts.

“She’s just a big girl and she’s growing, and when she needed time we slowed down and brought her along nice and easy, and it’s worked,” Rubley said. “We were so impressed with her run in Saratoga, so we’re kind of picking our spots lightly and figuring out where to go next. You never want to get too confident, but I have a lot of faith in this filly. She’s lovely.”

“She’s a big, beautiful filly,” Rubley said. “She gives me every indication that two turns is not going to be a problem, so we’ll probably look to try something like that next.”

Rubley said Runnymede Racing’s Alwaysmining, last seen finishing ninth in the July 13 Indiana Derby (G3), his 15th start in 15 months, has returned to her string at the Fair Hill Training Center in Elkton, Md. after a brief freshening.

Alwaysmining won the Maryland Juvenile Futurity and Heft Stakes 21 days apart to close his 2-year-old season, then extended his win streak with victories in the Miracle Wood, Private Terms and Federico Tesio to begin 2019. He bounced back from an 11th-place finish in the Preakness (G1) to be third in the Easy Goer Stakes June 8 at Belmont Park.

“He’s back in training. He had a little vacation. He’s back in training and we’re very excited. We’re looking to bring him back for the late fall and winter,” Rubley said. “He actually went to the owner’s farm. They have a big farm in Pennsylvania. He just needed a little time to catch his breath. He put on a little weight and he looks really good. I’m very happy with him.”

A gelded sophomore son of Tapizar, Top Line Growth improved to 3-0 lifetime at Laurel. Following the July 5 Iowa Derby at Prairie Meadows, he ran fourth in the West Virginia Derby (G3) and third in the Smarty Jones (G3).

“He came out of his race great, so we’re very happy with him,” Rubley said. “He’s been running against some pretty serious competition, so it was nice to get him out there and have him be the best. We’ve also liked him right along, and he continues to mature. I think [he and Arrifana] are both big, solid horses and they’re going to be even better as 4-year-olds.”