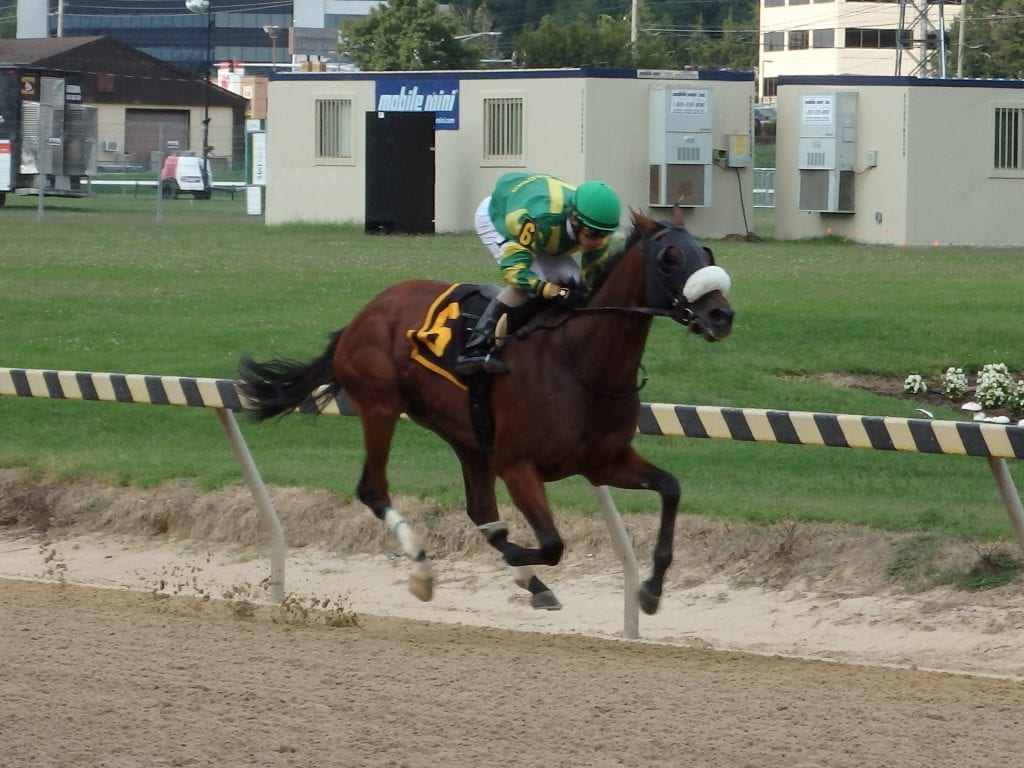 Conjecture and Wes Hamilton were much the best in Sunday’s Timonium feature. Photo by The Racing Biz.

At least that’s how it likely feels to R J G Racing Management LLC and trainer Tim Keefe. The five-year-old Great Notion mare made her first — and as it turns out, only — start n the Keefe barn a winning one Sunday at Timonium when she cruised to a dominant win in the day’s featured allowance/optional claiming contest, in which she was entered for a tag of $20,000.

“I’m disappointed we lost her,” Keefe said. “I’m not surprised.”

There were two claims in for Conjecture, who won for the seventh time in 34 career starts, while pushing her earnings to more than $250,000. In the end, Phil Schoenthal and Matthew Groff became her new trainer and owner, respectively.

Keefe and R J G had claimed her out of her last start for $16,000 at Laurel on August 11. He liked what he’d seen of her enough to enter her in Saturday’s $75,000 Timonium DIstaff, but when that race came up a bit too salty, he went to Plan B.

“We entered her in the stake to take a look at it,” Keefe explained. “We thought this might be a better spot.”

Under jockey Wes Hamilton, Conjecture grabbed the early advantage, and when no pace challengers materialized, Hamilton was able to ration her speed right into a 4 3/4-length victory in 1:46.06 for 1 1/16 miles on a fast main track.

“I was going to try to sit off a few horses, but she just broke sharp,” Hamilton said.

Conjecture paid $17.40 to win as the fifth-longest shot in the field of six. The exacta, with 7-5 favorite Victory Rally in the runner-up spot, returned $25 for a buck.

BIG T NOTES With only one day of live racing left in Timonium, the jockey title remains wide open. Ashley Castrenze won one on Sunday to get to five wins, same as Arnaldo Bocachica and tops in the colony. But four others — Xavier Perez, Kevin Gomez, Katie Davis, and Alcibiades Cortez — are just behind with four wins… Anthony Farrior won one race on the day to retake the lead in the trainer standings with six wins, one ahead of Hugh McMahon… One horse, Dat Dares Gold, has already posted two victories at the meet heading into the final day…