G1 winner Force the Pass retired to stud in Maryland 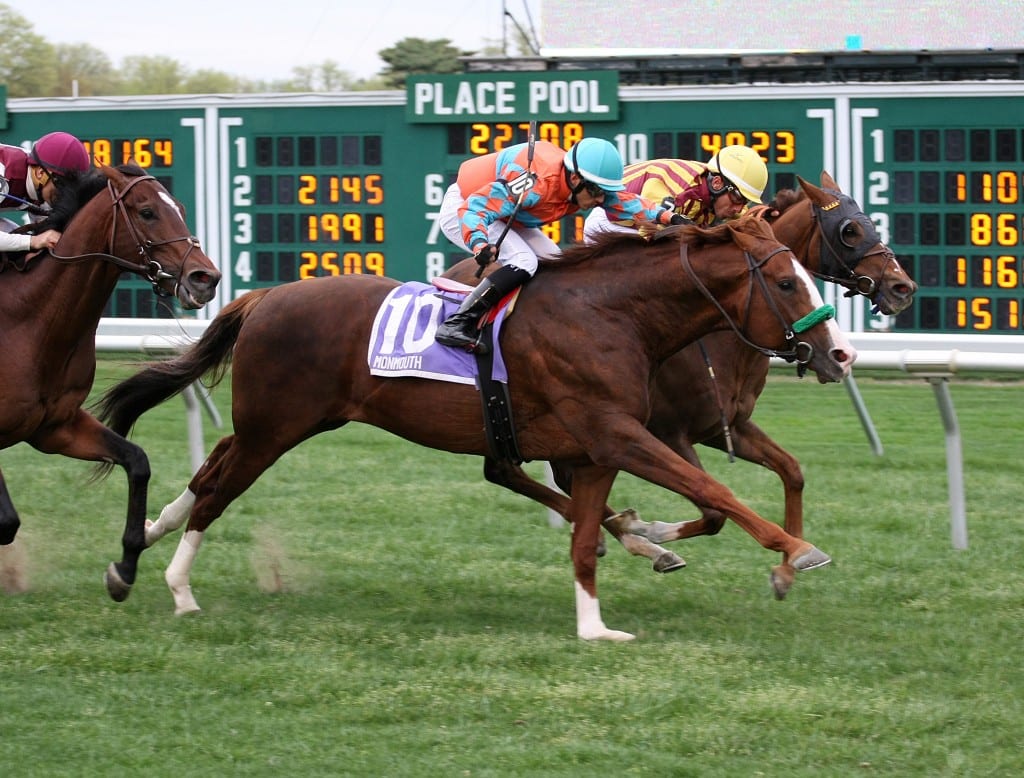 Force The Pass won the 2018 Cliff Hanger Stakes to kick off the 2018 season at Monmouth Park. Photo By Ryan Denver/EQUI-PHOTO.

Grade 1-winning millionaire Force the Pass has been retired from racing and will enter stud in Maryland in 2020 as the property of T.K. Kuegler’s Wasabi Ventures Stallions, LLC, who recently acquired the son of Speightstown from his owner/breeder Richard Santulli. Force the Pass will stand at Louis and Grace Merryman’s Anchor & Hope Farm as Wasabi’s first foray into the stallion business, after Kuegler’s Wasabi Ventures Stables has quickly ascended to be among the leading owners at Laurel Park in its short existence.

Kuegler has recently expanded his operation to include more than a dozen broodmares, and Wasabi will be supporting Force the Pass heavily at stud.

“We believe in the health and strength of the Maryland racing and breeding industry,” said Kuegler, “and we think Force the Pass offers incredible value to Mid-Atlantic breeders given his combination of race record, pedigree, and physique. We expect to use an aggressive marketing campaign to get 100 mares to the horse in his first season, which will give him every chance to live up to his potential at stud.”

While trained by Alan Goldberg, Force the Pass rocketed to the forefront of the sophomore turf division with his dominant, 3-length victory in the Grade 1 Belmont Derby, in which he flew home with a :45.65 final half-mile to defeat the likes of Divisidero, Bolo, Takeover Target and Startup Nation. That top-level victory at a mile-and-a-quarter followed a gutsy win in the Grade 3 Penn Mile in 1:34.03 in his preceding start. Having earlier scored in Gulfstream Park’s Cutler Bay Stakes after breaking his maiden at the Hallandale track in his second start, Force the Pass would go on to place in the Grade 1 Secretariat Stakes and Grade 2 Commonwealth Derby to close out his 3-year-old season. He placed in four more stakes as a 4-year-old (three of them graded), then won Monmouth Park’s Cliff Hanger Stakes at age six in 1:33.73. This year as a 7-year-old, Force the Pass was third in the Grade 2 Monmouth Stakes.

“Force the Pass is a big, good-looking horse, and he had a ton of talent, which he showed repeatedly on the racetrack,” said Goldberg. “He has every reason to make an excellent stallion.”

“Force the Pass was a brilliant 3-year-old with an amazing turn of foot, and he campaigned at a high level through his 7-year-old season,” said George Adams of Housatonic Bloodstock LLC, who brokered the deal to purchase Force the Pass and will serve as the Director of Stallions and Breeding for Wasabi Ventures Stallions and Stables. “He is one of only four Grade 1 winners at stud in Maryland. Combined with Speightstown’s status as a successful sire-of-sires, and given where Wasabi has priced this horse, we think Maryland-breeders will flock to him, especially after they see him.”

Force the Pass’s 2020 stud fee will be $4,000 LFSN, and a limited number of lifetime breeding bights are being offered in the horse for $6,000. For more information, contact [email protected], or visit www.forcethepass.com.