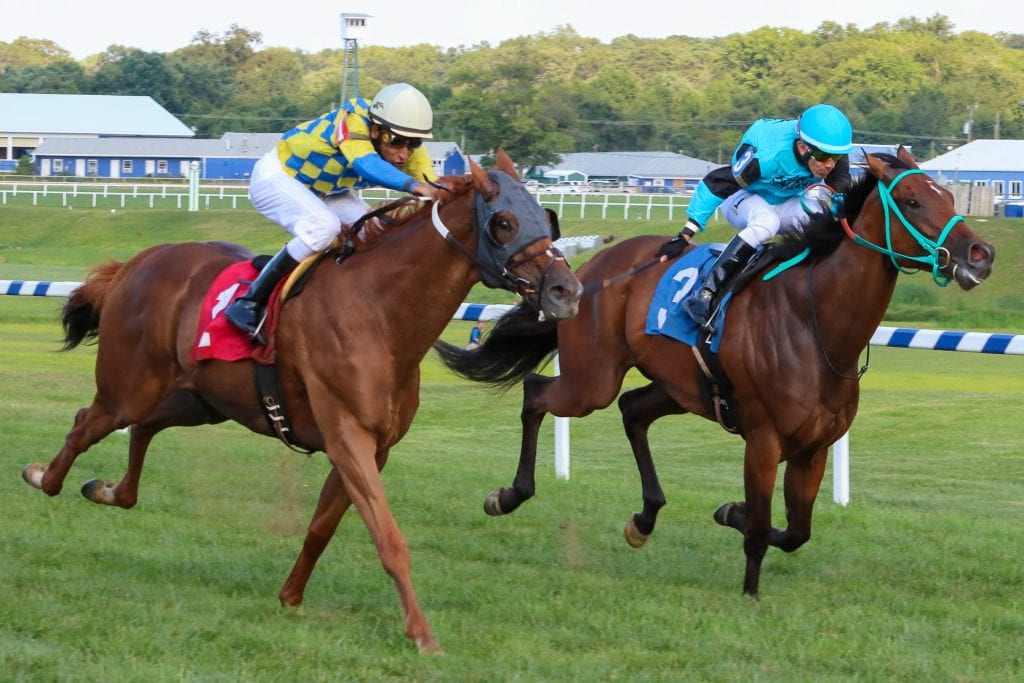 English Minister and Julian Pimentel were along in time to pip Taxable Goods to win the Find Stakes at Laurel Park. Photo by Dottie Miller.

On a weekend in which heat and humidity returned to the Mid-Atlantic region, Laurel Park hosted the latest edition of its “Maryland Pride Day,” featuring a quartet of stakes for Maryland-breds divided evenly among turf and dirt for male and female runners.

“It’s always great to win for races in a day, but winning three straight stakes is special,” Pimentel said after booting home Introduced to a narrow score in the Miss Disco in 1:10.14. “This was definitely a memorable day. I had to get after [Introduced] a little bit in the lane. That other filly [Bunting} would not give up. She put up a battle. But it was a good day. They don’t come around too often.”

Pimentel earned his first stakes win of the day aboard My Sistersledge, who lived up to her role as the even-money favorite when she rallied from just off the pace to score in 1:41.81 in the $75,000 All Brandy Stakes at one-mile and one-sixteenth on the grass. A five-year-old Etched mare trained by Michael Trombetta for owner-breeders John & Cheryl Banner, My Sistersledge has won twice in four starts this year, six times in 10 outings over the Laurel lawn and now sports an 8-2-7 slate and over $400,000 banked from 24 career tries.

“She’s really special to be around,” said Trombetta assistant Melanie Williams. “She knows what she needs to do when she gets to the track. Mike is such a great trainer to work for. I’ve learned so much working for him over the years. This mare can win fresh or she can run back in two weeks and still win. I came here with four horses today, so it was great to see one of them win.”

Williams and Pimentel were back in the winner’s circle 30 minutes later when English Minister rallied from just off the pace to capture the $75,000 Find Stakes on the grass for Trombetta. A nine-year-old English Channel gelding, English Minister has apparently found the fountain of youth during a time in his career when most are on the downslope. The son of English Channel has won four straight races and now owns an 8-9-13 slate and just over $550,000 banked from 54 career tries.

“I was watching Just Howard (the even-money favorite) and waiting for him to make his move,” Pimentel said. “But then I saw Trevor (McCarthy) ask him and he didn’t respond, so then I went after the leader on the turn. I had to get after my horse a little, but I knew that I had [Taxable Goods] measured.”

In the opening stake on the program, Where Paradise Lay (Feargal Lynch) benefited from a ground saving trip down the backside and through the far turn and rallied inside of rivals in the lane to forge a mild 9-5 upset in the $75,000 Star De Naskra Stakes for Maryland-bred three-year-olds by getting six furlongs in 1:10.69 over the main track, edging past 7-5 favorite Distant Shore (Trevor McCarthy) leaving the furlong grounds and holding off rivals late.

A sophomore son of Into Mischief out of a Candy Ride mare trained by Stanley Hough for owner-breeder Sagamore Farm, Where Paradise Lay rebounded from a fourth-place finish against older rivals in an allowance race at Saratoga Race Course last month to notch his second win in seven career outings and soar past the $100,000 plateau in career earnings.

“He broke really well and I was just biding my time down the backside and waiting for some room on the far turn,” Lynch said. “I saw Trevor trying to keep me pinned in on the far turn, but I knew those other horses would start to drift out a little turning for home. Once he got through along the rail, I knew he would go on from there. He was back in with three-year-olds today, so I thought he would run a big race. He just needed some room late.”

While Lynch had confidence in the homebred colt while biding his time through the early stages of the Star De Naskra, a pair of members from the Sagamore Farm team, Jocelyn Brooks and Debbie Warfield, admitted they were a little nervous during the middle portion of the race as Where Paradise Lay awaited racing room. Once they saw the colt get through along the inside their nervous energy was quickly transformed to elation.

“For a few seconds, I didn’t think he was going to get room,” said Brooks, who admitted letting out a brief expletive during the race. “But then I saw him get through along the inside and get the lead. From there he looked pretty good. His mother [Walkwithapurpose] won all of her races here. We had like 20 people here watching down along the rail and we were all cheering for him. This was nice. It’s always great to see one you bred win one of these stakes in Maryland.”

Where Paradise Lay is the second foal out of Walkwithapurpose, and the sophomore son of Into Mischief has two half-sisters on the ground, a two-year-old filly by Uncle Mo and a yearling filly by American Pharoah. Where Paradise Lay has now competed a five different ovals, finishing third in his debut at Gulfstream Park then second in his next outing there before running third at Keeneland then graduating over a wet fast main track at Churchill Downs. The Star De Naskra was his first stakes win.