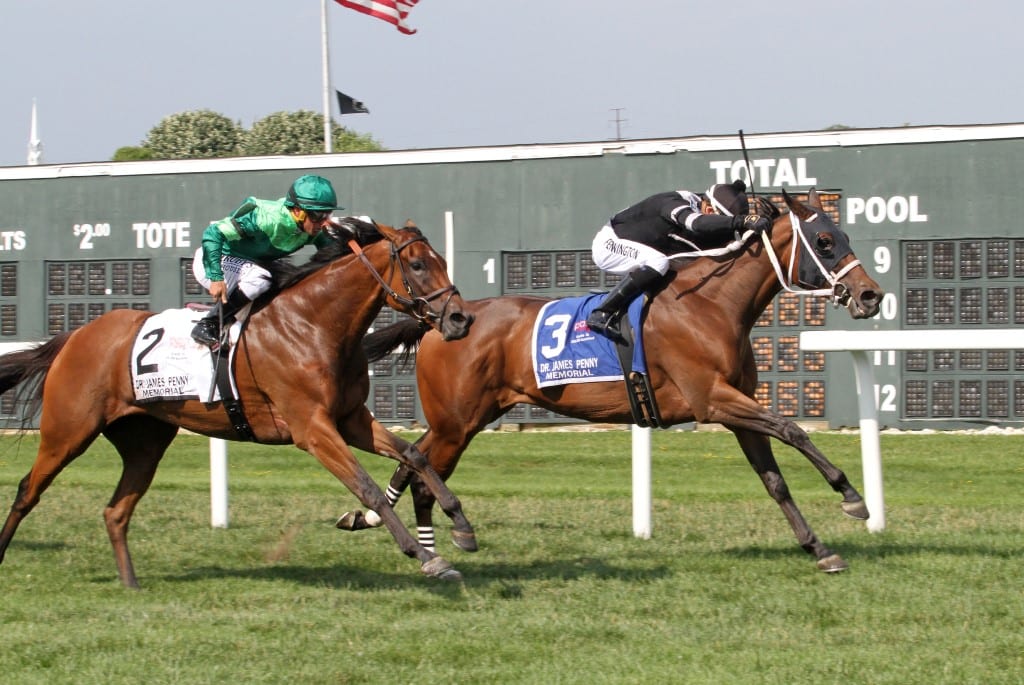 Under a perfect ride from local jockey Frankie Pennington, Notapradaprice held off a stiff late challenge from the heavily favored Fifty Five to score a 25-1 upset victory in the $200,000 Grade 3 Dr. James Penny Memorial Tuesday afternoon at Parx Racing. In just the first stakes appearance in her career, the five year-old daughter of Paddy O’Prado became a graded winner and pushed her career earnings to just over $452,000.

On paper, Fifty Five, racing out of the powerhouse Chad Brown stable, appeared to have significant edge in both class and numbers. But of course, races aren’t won on paper. Without much speed in the race, Pennington smartly got Notapradaprice into the race early, sitting just off of the outside flank of front running Play Me a Memory. Meanwhile, Javier Castellano was content to take Fifty Five toward the rear of the six horse field, sitting fifth through the opening stages. Having run a quarter in 25.31 and an opening half of 50.28, the tempo decidedly began to pick up as the race moved to the far turn. Having established perfect early position, Pennington got first run on the leader with Notapradaprice and got the lead with just less than three furlongs to run. With the small field beginning to bunch up, Castellano was forced to go four wide around the far turn and was even fanned a little wider coming off the final turn.

Now straightening away, the full out sprint to the wire began. Notapradaprice was in front coming into the final furlong, but Fifty Five had her dead in her sights and looked like the likely winner as the two came to the final sixteenth. Pennington and Notapradaprice, however, would have none of it. Notapradaprice dug in valiantly and simply would not let Fifty Five get by. These turf races that so often come down to a nose, a head or a neck at the wire was actually not that close today, the final margin going into the books as a half-length.