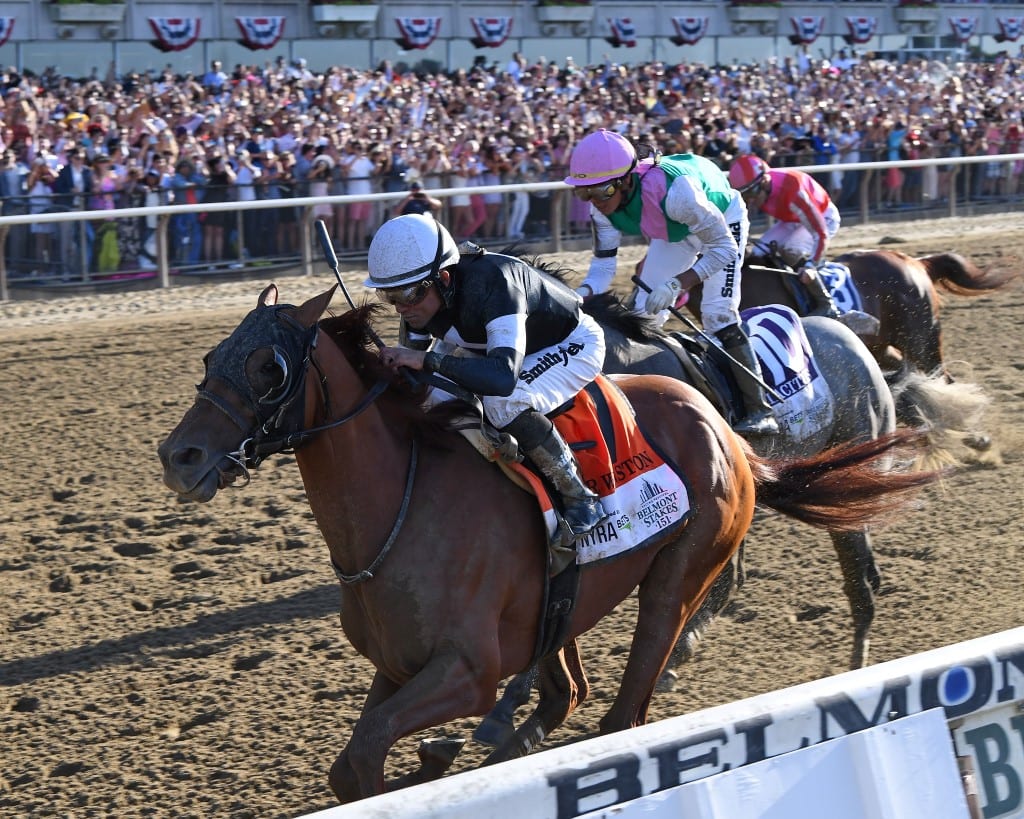 War of Will couldn’t secure a second leg of the Triple Crown.

But his trainer, Mark Casse, could and did, as Sir Winston, the “other Casse horse” in the 10-horse Belmont field, parlayed a ground-saving trip into a one-length victory in the 151st running of the Grade 1 Belmont Stakes Saturday evening.

Combined with War of Will’s Preakness victory three weeks ago at Pimlico, the win gave Casse’s barn two of the three legs of the Triple Crown.

It was Sir Winston’s third career victory from 10 starts, and the winner’s share pushed his career earnings to $961,773. It was also his first graded victory – and first win on a dirt surface, his two prior scores having come on the synthetic at Woodbine.

“He’s an amazing little horse. If at this time last year, if you had asked me to rate our top-20 2-year-olds, he would have been about 16th or 17th. But I’m very proud of him because he’s kind of what our operation represents, and that is I feel like we develop horses,” Casse said in a NYRA release. “I have this philosophy. I start every horse out thinking that they are going to win the Kentucky Derby, or the Oaks. That’s what I do. And I will try different surfaces; I will try different methods. With a horse like Sir Winston, you know, it paid off there.”

Sir Winston entered the Belmont with relatively undistinguished credentials, but then again, it was a field full of horses with modest credentials. Only three of the 10 had won a graded stake prior to the Belmont, and only the two favorites – the Bill Mott-trained Tacitus (9-5) and Casse’s War of Will (7-2) – had won more than one.

War of Will’s Preakness victory stood as the only Grade 1 win in the bunch.

But bettors fell in love with Tacitus, a handsome grey son of Tapit who had won a pair of Grade 2 events earlier in the spring, taking the Tampa Bay Derby and the Wood Memorial. Trained by Hall of Famer Bill Mott, he had rallied from 15th in the Kentucky Derby to fourth and then was elevated, via disqualification, to third. He went off the solid favorite today, had a wide journey under Jose Ortiz, and finished willingly but too late for the place, a length behind the winner.

“It looked like he kind of ducked in a little bit in mid-stretch at the eighth pole. He came running and finished up the race good, but it looked like he just got going too late,” Mott said. “I probably shouldn’t comment too much without seeing the rerun, but it was a little bit of a wide trip. We did have a bit of a wide trip, which you never like. He came running and looked like he was traveling better than anybody. We planned to try and be in contention at the quarter-pole and he was. He just couldn’t get there.”

Sir Winston, meanwhile, entered the contest with a series of mediocre tries on the main track – until the Grade 3 Peter Pan. In that event, also contested at Belmont Park, he closed strongly to finish second, less than two lengths behind the winner after getting the final three furlongs in less than 36 seconds.

In that event, Sir Winston earned a 100 Beyer speed figure – the highest earned by any runner in the Belmont field.

That big kick – and apparent like of the sweeping racetrack known as Big Sandy – presaged well come Belmont day. So, too, did the presence of jockey Joel Rosario, who had also ridden him in the Peter Pan.

When the gates opened in the Belmont, rider Jose Lezcano quickly steered longshot Joevia (21-1) to the lead, and once he made it, Lezcano did everything he could to slow the pace to a crawl. The opening quarter-mile went in 23.92 seconds, and Lezcano and his charge continued from there to dole out moderate fractions while maintaining a slight edge over Tax.

Farther back, meanwhile, Rosario had managed to secure inside position after breaking from the seven-hole and eyeballed the action ahead from eighth in the early going. Rosario and Sir Winston gradually moved forward while maintaining their rail-huggling slot until, rounding the bend, he had to shift out slightly to move past a tiring rival.

He then shifted out farther leaving the quarter-pole, creating a seam, and rallied strongly to overtake Joevia. Tacitcus revved up his run a shade too late.

“He’s a very nice horse and you have to let him do this thing. I’m really happy,” said Rosario of Sir Winston. “It seemed like he didn’t mind [being] inside. I just took my time with him. For the distance, he broke very good. Today, he was a little closer, so I let him be where he was comfortable.”

It was Rosario’s second Belmont Stakes win – he also won the Belmont when Tonalist ended California Chrome’s Triple Crown bid in 2014 – and second win on the day.

Joevia held third, less than two lengths behind the winner and a length ahead of fourth-place finisher Tax.

War of Will, who had a wide journey under Tyler Gaffalione, loomed a threat at the head of the lane but tired to finish ninth, seven lengths behind the winner.

“You didn’t see the real War of Will today. I know that,” Casse said of the Preakness winner. “So, we’ve got to get back and figure out what’s up and why he didn’t run better.”

Sir Winston is a homebred son of Awesome Again for Tracy Farmer. He is out of the graded stakes-winning Afleet Alex mare La Gran Bailadora.