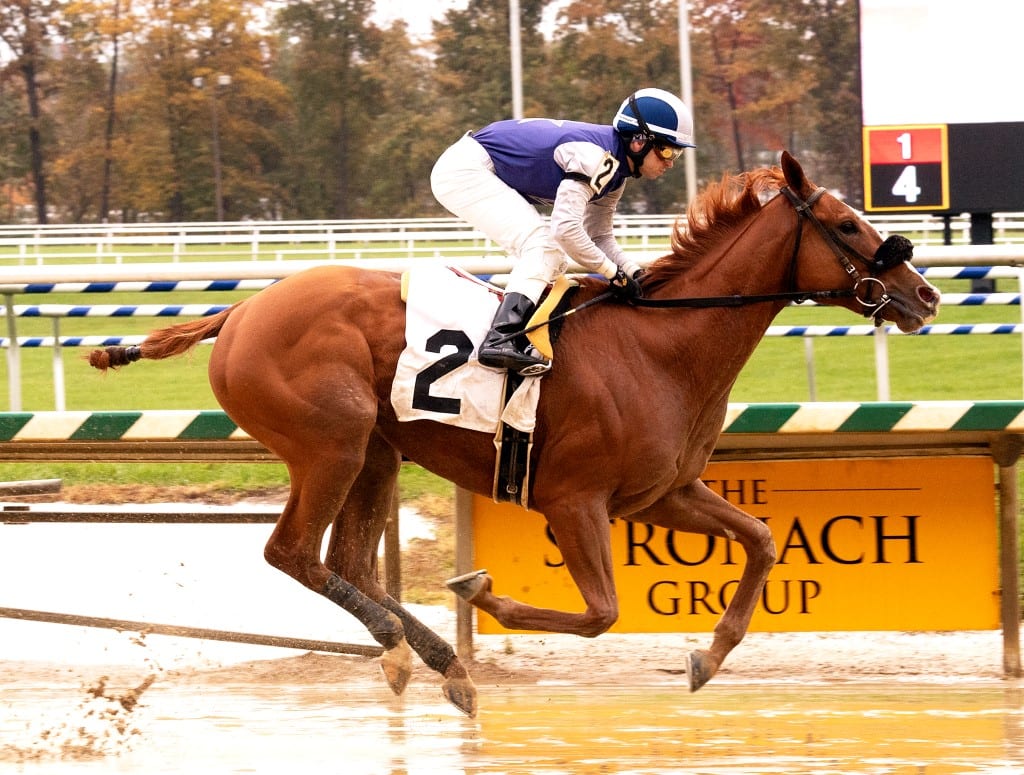 Godolphin’s Nonsensical tops a field of nine 3-year-old fillies in the $50,000 Light Hearted Stakes at Delaware Park this Wednesday. The mile and seventy yard affair is the local prep for the Grade III Delaware Oaks slated for July 6th.

Nonsensical has one victory from four career starts. In her latest, the daughter of Street Sense conditioned by Thomas Albertrani posted a 2-1/2 length score in a mile and an eighth maiden at Belmont Park on April 26th. Previously, the Kentucky-bred was winless in three outings at Gulfstream Park this past winter.

The most experienced in the field is Jagger Inc.’s Our Super Freak who as a career record of two wins, four seconds and two thirds from ten starts. In her last, the daughter of Mineshaft finished eighth in the mile and an eighth Grade II Black Eyed Susan Stakes at Pimlico on May 17th. Previously, the Kentucky-bred ran second beaten a nose in the mile and a sixteenth $125,000 Weber City Miss Stakes at Laurel Park on April 20. At Delaware Park, she has a record of a win, including her maiden victory, a second and a third from three starts. She is conditioned by six-time defending leading trainer Jamie Ness.

“We really had no excuse for her last race,” said trainer Jamie Ness. “When you face Graded competition, you have to do better than she did in the Black Eyed Susan. But we are going to regroup and come back in this spot on Wednesday. She is doing well and I am expecting a better performance in this race. If she shows us enough improvement, we will likely run her in the Oaks.”

Nick Sanna Stables’ Proud Mandate will be attempting to stretch her unbeaten streak to three in the Light Hearted. The daughter of Strong Mandate is unbeaten in two career starts sprinting. Last year, the Kentucky-bred broke her maiden going five furlongs at Monmouth Park and this year, she posted a 1 ¾-length score in seasonal bow going six and a half furlongs in an allowance at Parx on May 7. She is trained by Keith Nations.

“She has done everything right in her two starts,” said trainer Keith Nations. “We wanted to keep her with 3-year-olds and these kind of stake races allow us to do that. After her race at Parx, we tested her with some long gallops and we started training her to go two-turns just to see how she would like it. She responded really well to that kind of training regiment, so this is the logical spot to try her long for the first time. Her pedigree suggests she should handle two turns, so we are going to take a shot.”

A strong effort in the Light Hearted would likely earn her a spot in the Delaware Oaks.

“Nick Sanna owns her, he is a local Delaware guy, so it would mean a lot for him to be able to take a shot at a race like the Delaware Oaks,” Nations said. “We are extremely hopeful that she will handle the distance well and to show she is of that kind of quality. It sure would be a lot of fun to take the next step and it would not only be a thrill for myself, but also for Nick (Sanna).”