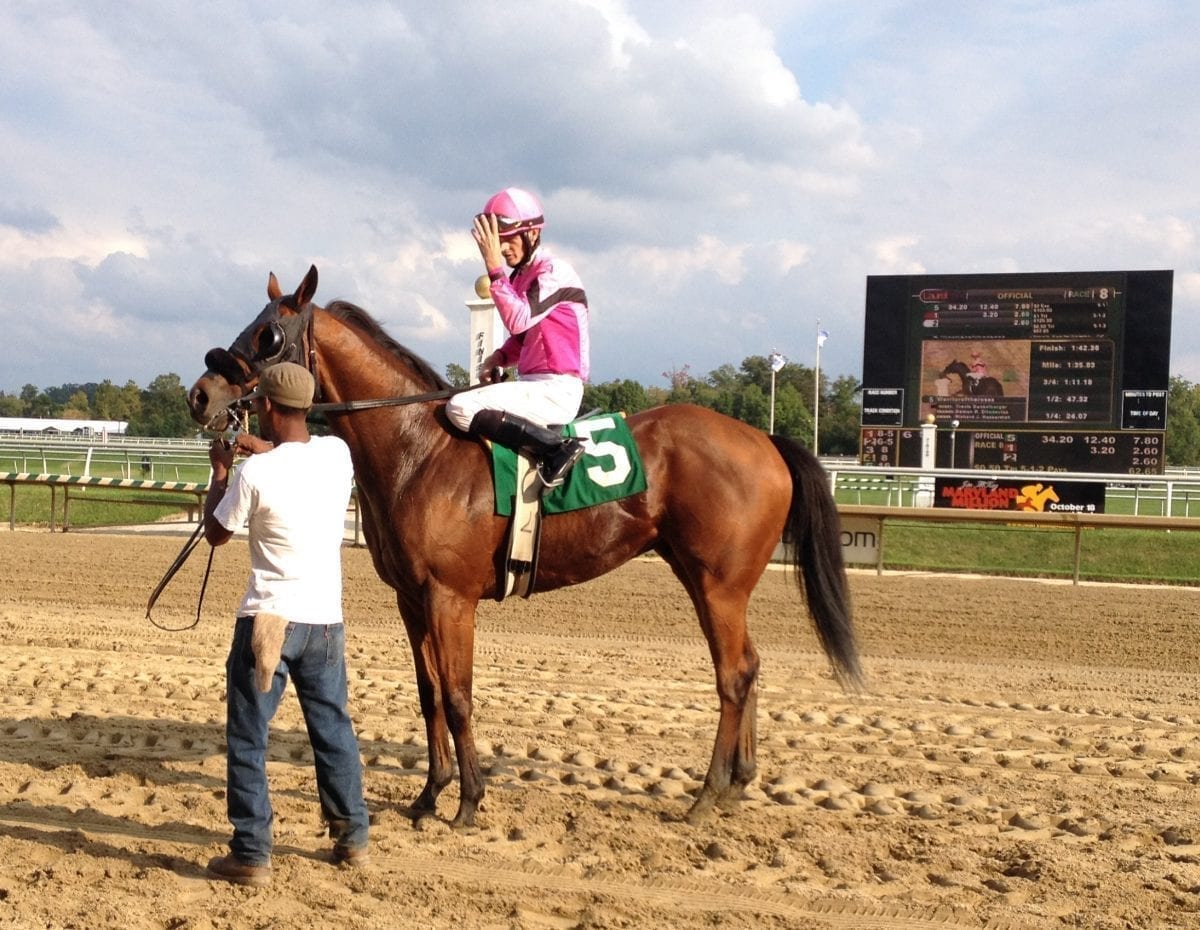 Warrioroftheroses after a win at Laurel. Photo by The Racing Biz.

Richard J. Hackerman’s 10-year-old gelding Warrioroftheroses, racing for the third time this year and 62nd overall, picked up career win No. 13 with an 18-1 upset of Thursday’s Opening Day feature as racing returned to Pimlico Race Course.

Ridden by Carol Cedeno for trainer Damon Dilodovico, Warrioroftheroses ($38.20) ran a mile and a sixteenth in 1:42.93 over a fast main track to win the $45,000 second-level optional claiming allowance for 3-year-olds and up by two lengths over fellow long shot Brighton Lane. Throw the Fade, favored at 6-5, was third.

Warrioroftheroses broke from Post 3 but was outrun for the lead by Throw the Fade, who led through fractions of 23.52 and 46.70 seconds pressed to his inside by Cedeno. The top two gained some separation around the far turn but it was Warrioroftheroses, longest shot in a field of six, who put away his rival and drew off down the lane.

“The old guy went over half a million today – the hard way,” Dilodovico said. “We were actually trying to make the lead. If I could have picked a spot where I didn’t want him to be throughout the entirety of his race, it was the trip he got. I don’t know if he’s ever won off a trip like this, but maybe he’s getting a little wiser with age.”

Warrioroftheroses has placed four times in stakes, none better than his third in the historic Pimlico Special (G3) in 2016. The win was his first since last June at Delaware Park and first in five career tries at Pimlico.

“He’s been good. We’ve taken our shots in some tough races but the owner doesn’t make me overdo it with him. When he needs time, he lets me give it to him,” Dilodovico said. “This is huge. We knew that he loved the surface. He had a third in the Special a couple years ago, but I think this was the first time we’ve been able to get him in at a mile and al sixteenth at this track.”

The first win of the Preakness Meet went to 4-year-old gelding I Ain’t Never, a South Carolina-bred trained by Hamilton Smith for his brother Franklin ‘Goree’ Smith. Sent off at 13-1, I Ain’t Never (29.80) came flying on the far outside to emerge from a four-way photo finish with a nose victory in the five-furlong starter optional claimer. The winning time was 58.48 on the firm turf course.

“That’s a nice way to start off. It was a good race with four or five of them on the wire together. I liked the fact that we’ve got a little slower turf than we have [at Laurel] so let’s hope this is the start of something good,” Hamilton Smith said. “I wanted a little more distance, but he ran good going 5 ½ last year so with a little luck I thought he might be able to get a piece of it. I didn’t know he’d win it, but he ran real good.”

Fresh off his third consecutive meet title in Maryland, jockey Trevor McCarthy teamed with trainer Jamie Ness for three wins on Opening Day – So Street ($5) in Race 2, Minister’s Strike ($5.20) in Race 5 and Speed Game ($4.40) in Race 9.

The 12-day Preakness Meet at Pimlico runs Thursday to Sunday except May 19 through Memorial Day, May 27, highlighted by the 144th running of the $1.5 million Preakness Stakes (G1), the Middle Jewel of the Triple Crown, Saturday, May 18 and the 95th renewal of the $250,000 Xpressbet Black-Eyed Susan (G2) Friday, May 17.