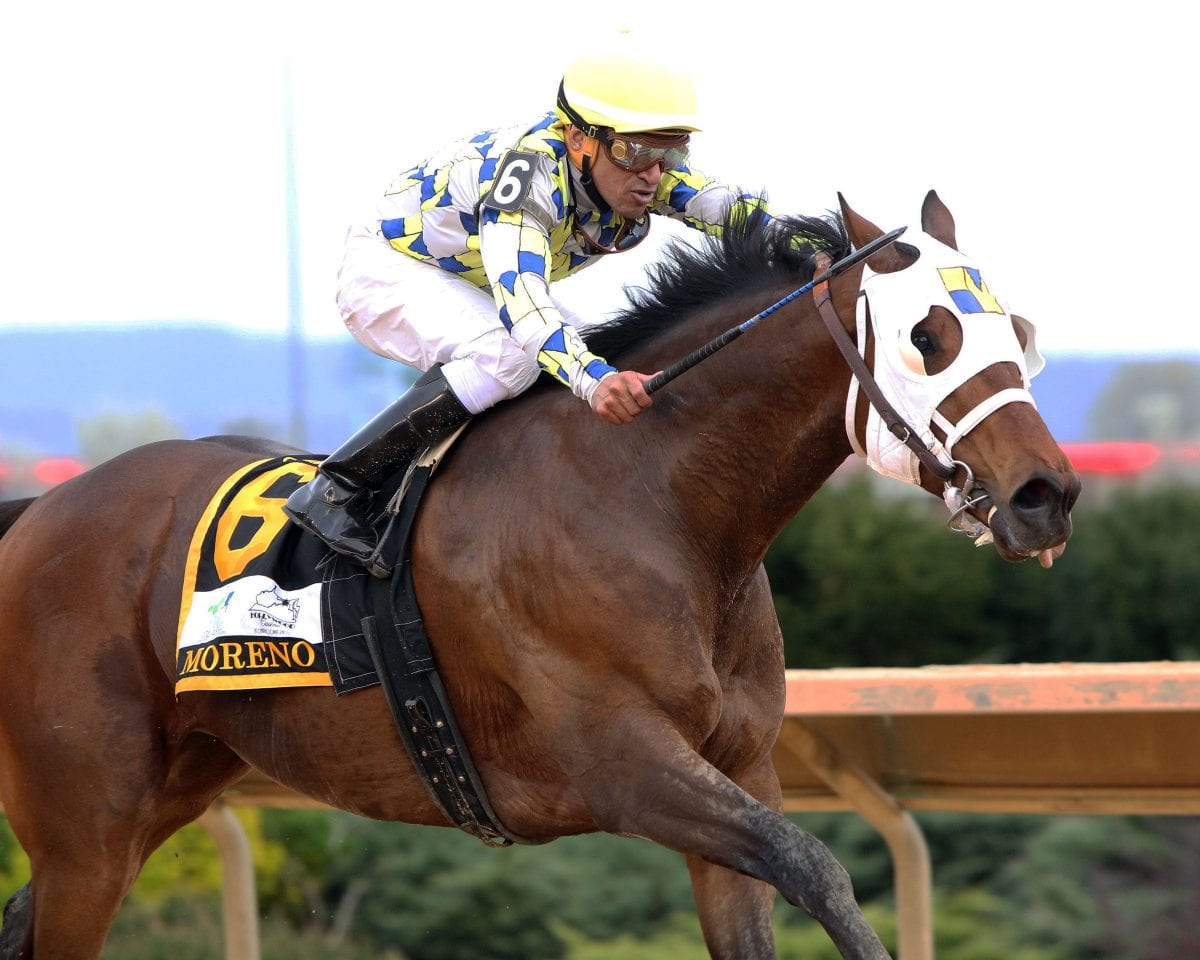 The Grade 2, $1 million Charles Town Classic – set to be renewed for the 11th time on April 20 – has produced no shortage of great performances and memorable moments.

Here are the five fastest runnings, along with some other interesting data:

The 2015 renewal of the Classic will always be remembered for its bad news – Shared Belief, the 3-10 favorite, was pulled up and vanned off – but that shouldn’t obscure Moreno’s titanic effort. The Eric Guillot trainee pressed the early pace of 84-1 longshot Warrioroftheroses before drawing away under jockey Cornelio Velasquez to a two-length victory in the track record time of 1:48.81. His time is a full second faster than any other Classic winner. Moreno, a homebred for Southern Equine Stable LLC, won only four races in his career – but he made them the right races en route to earning more than $2.9 million.

The very first Classic, in 2009, saw local favorite Researcher power to a 2 ¼-length victory in 1:49.86. Trained by Jeff Runco, Researcher had been bred in Virginia by the Virginia Tech Foundation and was owned by Rutledge Farm. Under jockey Kendrick Carmouche, he dogged favored Commentator most of the way around the track before taking over on the final turn. Researcher concluded his career with 13 wins and just shy of $1.4 million in career earnings.

The 2013 edition of the Classic stands as its best to date, having attracted a field that included multiple-Grade 1 winners Game On Dude and Ron the Greek, as well as the defending champ, Caixa Eletronica, himself a winner of multiple graded events. And in a thriller that lived up to its advance billing, Game On Dude and jockey Mike Smith prevailed in a three-way battle, winning by a half-length over the improving Clubhouse Ride, with Ron the Greek just a nose farther back in third in a time of 1:49.93. Game On Dude, who also finished second in two other Classics, concluded his career with 16 wins and nearly $6.5 million in earnings for trainer Bob Baffert.

The second year of the Charles Town Classic looked a lot like the first one, as the Jeff Runco-trained Researcher powered to a 1 ¾-length victory in 1:49.94, this time with Luis Perez up. Oddly enough, Researcher had been sold to Kinross Corp., just five days prior to the Classic, making this one a quick return on investment. Kinross, owned by Zohar Ben-Dov, raced Researcher on the flat just three times after this score, all three coming the following year, before attempting without success to turn him into a steeplechase horse. As a result, Researcher’s score in the ’10 Classic would turn out to be the final win of his career.

The Todd Pletcher-trained Caixa Eletronica won a lot of races In his career – 23, to be exact – none more valuable than his score in the $1 million Classic, contested as a Grade 2 event for the first time in 2012. Under Javier Castellano, Caixa Eletronica rallied from mid-pack to score a dominant three-length win over defending champ Duke of Mischief in 1:50.28. He would finish fifth the following year when attempting to defend his title and conclude his career with more than $1.8 million in earnings.

And some other odds and ends

The average Classic has been won in a time of 1:50.495; on a fast track, that drops to 1:50.10… The two slowest runnings of the Classic — Duke of Mischief (1:51.13) in 2011 and Imperative (1:53.05) in 2017 — are also the only two to be run on a track rated less than fast; both came on sloppy, sealed racing strips… Seven of the first 10 Classic winners have returned to defend their crowns the following year, though only one, Researcher, succeeded in that quest. The exceptions: Researcher, won in ’09 and ’10 but did not return in ’11; Imperative, who won in ’14 and ’17 and ran the two years in between but did not contest the race in ’18; and Moreno, who made a couple of more starts after his 2015 victory before being retired… The largest margin of victory in the Classic to date was Caixa Eletronica’s three-length score in 2012, while the last two years have produced a dead-heat for narrowest victory, Imperative (2017) and Something Awesome (2018) having each won by a neck… Half of the 10 Classics have been won by at least two lengths…