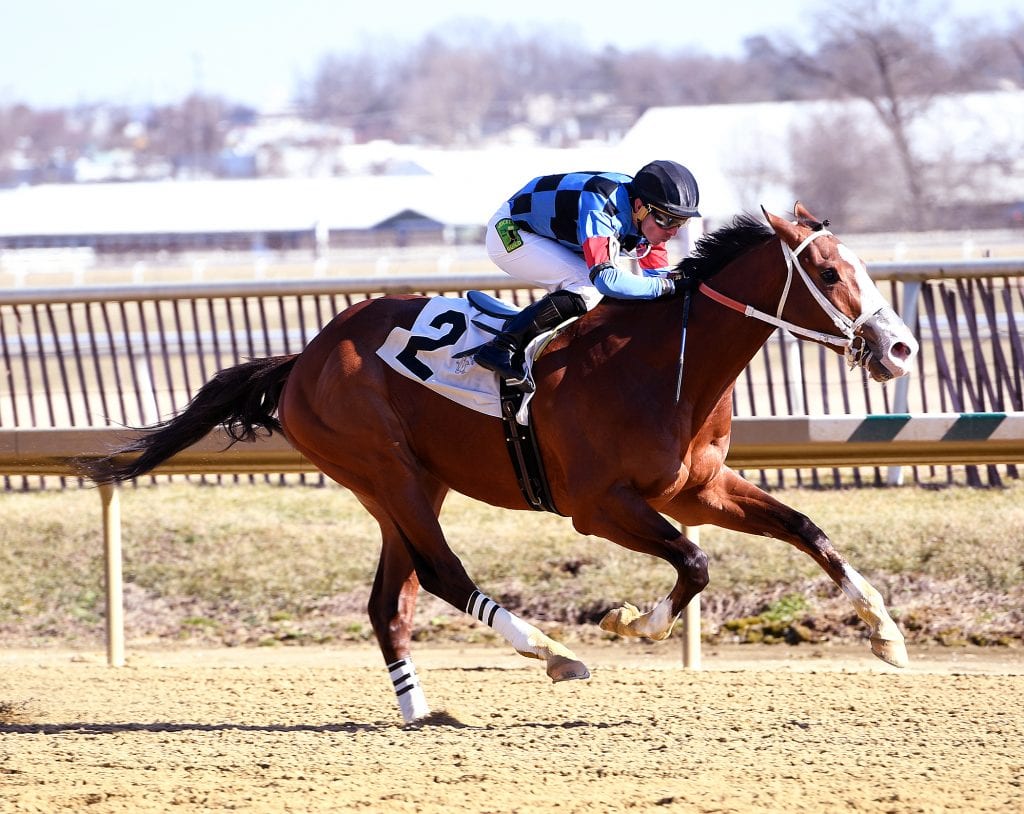 In the hours after Hoffa’s Union romped to a 15 1/2-length victory in a two-turn maiden special weight event at Laurel Park in his career debut February 28, trainer Gary Capuano’s cellphone was buzzing with calls from would-be buyers.

Less than a week after Hoffa’s Union graduated at first asking for Capuano, the son of Union Rags has a new home, sold privately for an undisclosed six-figure sum to a group that will enlist Mark Casse as his trainer as part of his Florida contingent.

“After he won that impressively I was flooded with calls and finally we got an offer that we felt was worthy of his ability,” Capuano said. “It would have been fun to have a horse for all the stakes races here this spring and then maybe have another horse to saddle for the Preakness. But we got a really good offer for him, so we sold him and now he’s on his way to Florida. We might see him back here in the Preakness, but that will be up to Mark Casse and his new owners. He’s definitely got that much talent. It was tough to let him go, but while you’re in this business you have to find ways to stay in this business a while longer.”

Following four workouts this year, including a handy one-mile work one week before his career debut, Hoffa’s Union promptly trounced his foes in a one-mile and one-sixteenth event in 1:43.61, earning a lofty 94 Beyer speed figure for that performance. Capuano said that he had expected a big effort from the sophomore.

Hoffa’s Union is a son of Union Rags out of the stakes-placed Malibu Moon mare Malibu Red, and Capuano said he had always intended to run him two turns in his career debut, primarily because of what he hoped would come next.

“He had been training great and I was really expecting him to run really well in his career debut last week,” Capuano said. “He’s bred to be something nice, and he’s always trained like he was meant to be a really good one. After he won that first start, my plan was to run him back in the Private Terms Stakes [on March 16] and then the Tesio Stakes [April 20] and then hope to try him in the Preakness. He might be in the Preakness, but that’s not going to be up to me anymore.”

In the days following the giant debut effort from Hoffa’s Union, Capuano noted he was inundated with calls from prospective buyers. He had purchased Hoffa’s Union as agent from Kings Equine for a mere $11,000 at Timonium in the 2018 Fasig-Tipton Midlantic two-year-olds in training sale last summer. That was eight months after the son of Union Rags fetched $40,000 as a yearling in the September sale at Keeneland.

Capuano will forever be remembered as the conditioner of Captain Bodgit, winner of both the Florida Derby and Wood Memorial before running second as the favorite in the 1997 Kentucky Derby and then third as the choice in the Preakness Stakes, both of which were won by Silver Charm. Captain Bodgit, who won seven of 12 starts and earned over $1 million, never raced again after the Preakness and had lukewarm success as a sire. Capuano also sent out Cherokee’s Boy in the 2003 Preakness Stakes after that runner had beaten up the local competition in three sophomore stakes.

“It was way too early to compare Hoffa’s Union to Captain Bodgit or Cherokee’s Boy,” Capuano said. “When we bought him, we knew he had a few minor ailments, but nothing that would prevent him from racing. He trained really well and he ran tremendously. Horses don’t know what they cost. We bought him based on his breeding, and he always showed me that he could run to it. When Captain Bodgit got sold, I was able to keep training him. With this horse, now it’s up to Mark Casse to decide where he’ll go next. Wherever he goes, I’ll be rooting for him.”