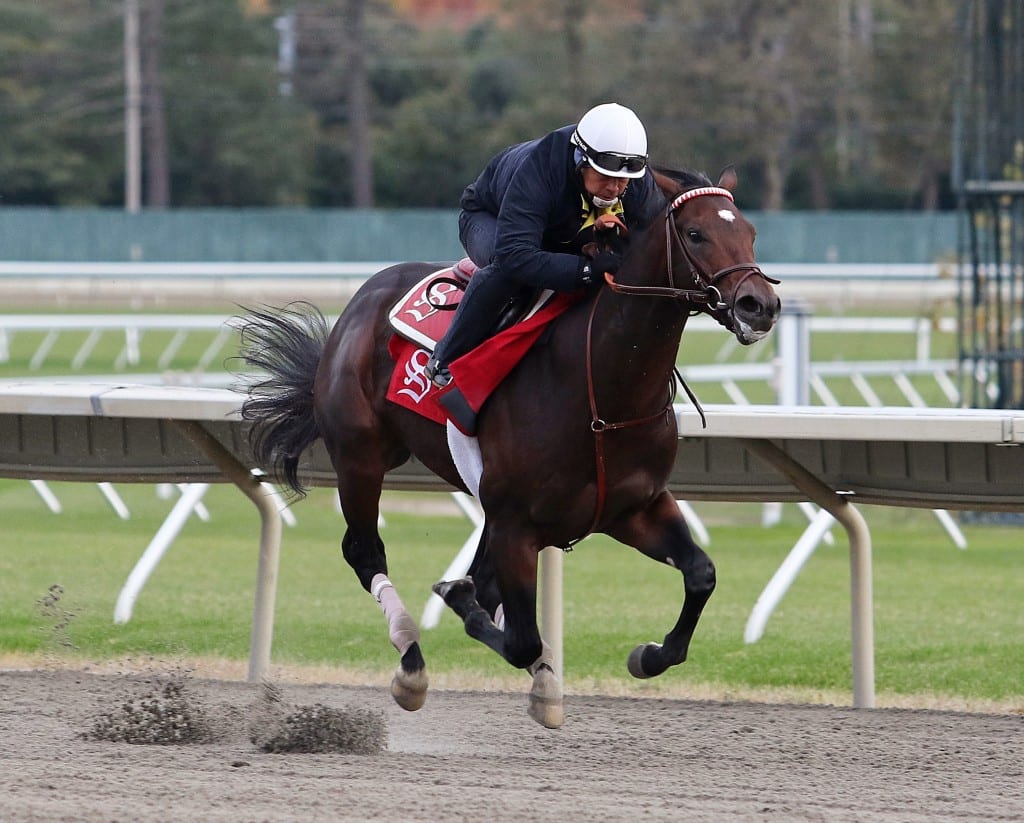 Grade 1 winners Mind Control and Knicks Go, along with undefeated California raider Instagrand, headline a formidable field of eight in the Grade 3, $300,000 Gotham, a one-turn mile for 3-year-olds on Saturday at Aqueduct Racetrack.

As part of New York’s “Road to the Kentucky Derby” series, the Gotham offers 50-20-10-5 qualifying points to the first four finishers on a stakes-laden card that also includes the Grade 3, $200,000 Tom Fool Handicap at six furlongs for 4-year-olds and upward; the $150,000 Stymie at a mile for 4-year-olds and up; and the $250,000 Busher Invitational, a one-mile test for sophomore fillies offering 50-20-10-5 qualifying points to the Kentucky Oaks.

KRA Stud Farm’s Knicks Go, a grey son of Paynter trained by Ben Colebrook, boasts a record of 2-1-1 from seven career starts including a memorable 5 ½-length score on October 6 at Keeneland in the Grade 1 Breeders’ Futurity at odds of 70-1.

“I was expecting him to run well, but that effort even surprised me. I don’t think he should have been 70-1 and I thought he would run well because he trained so well over the track,” Colebrook said.

Knicks Go proved his Grade 1 breakthrough was no fluke with a prominent follow-up effort in the Grade 1 Breeders’ Cup Juvenile, at odds of 40-1, where the colt held a narrow lead at the top of the lane, holding off all but current Kentucky Derby favorite Game Winner, who went on to earn year-end honors as Eclipse Award-winning 2-year-old champion.

“He ran great that day. He inherited the lead when Chad’s horse [Chad Brown-trained Complexity] stopped and it looked like he might have got the jump on Game Winner and maybe had enough to hold him off, but Game Winner is so tough and so classy he came and got us. We made him run for it,” said Colebrook.

Knicks Go was bred in Maryland by Angie Moore and is out of the stakes-winning Outflanker mare Kosmo’s Buddy, herself a Maryland-bred. Knicks Go arrives at the Gotham from a pair of disappointing efforts as the mutuel favorite when eleventh in the Grade 2 Kentucky Jockey Club and fifth, last out, in the Grade 3 Sam F. Davis at Tampa Bay Downs when making his 3-year-old debut.

“I think he did need that last race, especially on that Tampa track which can be a little tiring at times,” said Colebrook. “I think he’ll like the configuration [at Aqueduct] but the surface is a question mark. He has tactical speed which will help him. Maybe now that he’s in a race where he’s not the favorite, like the last two, maybe he’ll go back to the old Knicks Go.”.

Red Oak Stable and Madaket Stables’ Mind Control, trained by Gregory Sacco, made his Aqueduct debut a winning one on New Year’s Day, posting a front-running 1 ½-length win over a stubborn Our Braintrust in the Jerome, earning 10 points towards qualifying for the “Run for the Roses.”

“He still plays in a race a little bit and when that horse [Our Braintrust] came up to him in the Jerome, for a second I thought he was going to go by him. But, he does that in the morning as well and draws off,” said Sacco. “Going into the Gotham, this race appears to be a tougher race with Instagrand coming and Not That Brady was very impressive in the Withers.

“Our horse is going to have to improve, but we’re expecting an effort like the Jerome,” continued Sacco. “He’s going into this race better than he went into the Jerome in terms of maturity and filling out. He’s really starting to put the muscle on in the right places.”

The Stay Thirsty colt graduated at second asking in a maiden sprint on August 12 at Monmouth Park before shipping to Saratoga to wire a field of eight in the Grade 1 Hopeful.

Mind Control completed his 2-year-old season with a deceptively good seventh in the Grade 1 Breeders’ Cup Juvenile after encountering trouble at the break.

Sacco said Mind Control has trained well out of his seasonal debut in the Jerome.

“Everything has gone according to plan,” said Sacco. “For the most part, he hasn’t missed a beat. He’s filled out, he’s stronger and his works have been well within himself. He couldn’t be doing any better going into the Gotham.”

John Velazquez has the call on Mind Control from post 3 and Sacco is confident the Hall of Fame rider can work out a trip.

“He’s really push button now,” said Sacco. “He understands what we want him to do and if Johnny elects to sit off a hot pace, I’d be comfortable with him doing that. I think he’ll fire, and we’ll see if we’re good enough when the running starts.”

With Santa Anita closed “indefinitely” after a series of equine fatalities, California legends Bob Baffert and Jerry Hollendorfer both have shipped East for the Gotham. The former will saddle recent allowance winner Much Better and give a leg up to Mike Smith, while the latter will give the reins to Javier Castellano aboard two-for-two Instagrand, winner of the Grade 2 Best Pal in his most recent start.

This NYRA press release has been edited and some additional information inserted.