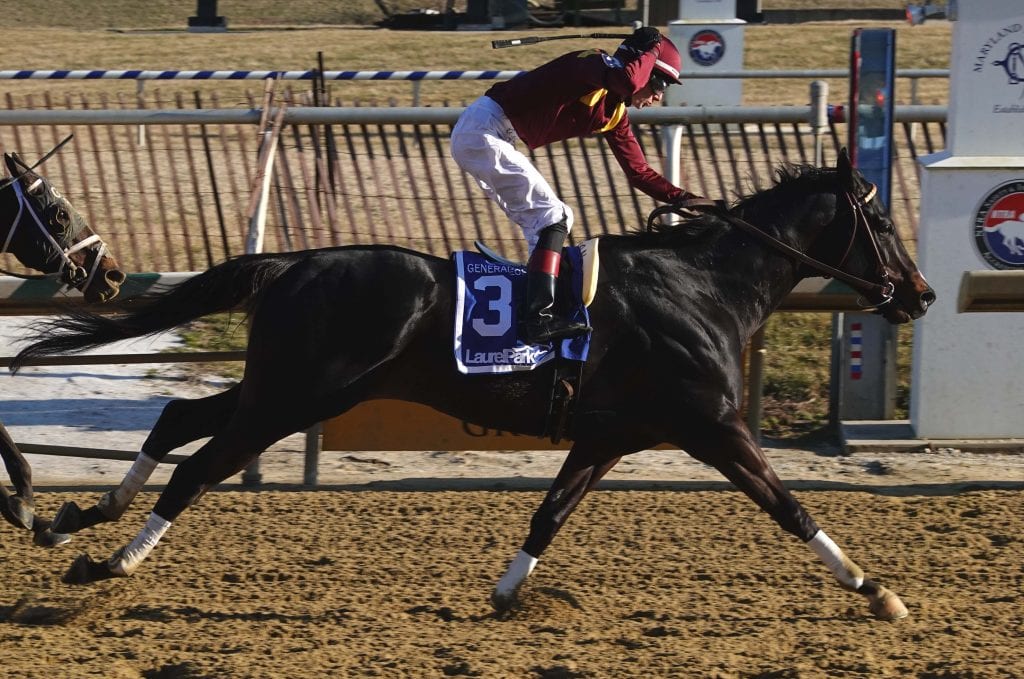 Saddling just her 18th starter as a trainer and first in a stakes race, Jenn Patterson admitted she “definitely had tears in my eyes” when Uncontested (photo above by Laurie Asseo), owned by Robert LaPenta and Harry Rosenblum, went nearly gate-to-wire to win the $250,000 General George Saturday afternoon at Laurel Park.

Patterson, the former exercise rider and assistant trainer to Hall of Fame conditioner Shug McGaughey, watched Uncontested take the lead under jockey Trevor McCarthy shortly after leaving the gate and set fractions of :22.13, :44.32 and 1:08.61 before crossing the finish a length in front of Majestic Dunhill in 1:21.06. Laki finished third and So Share fourth.

A 5-year-old son of Tiz Wonderful, it was Uncontested’s second consecutive victory since moving to Patterson’s shedrow.

“It’s amazing,” Patterson said. “I was crying. I definitely had tears in my eyes because it was the first stakes race. It’s an honor training a horse like this, and for this horse alone I was excited about coming here and running in this race because he’s been doing so well and I don’t think he’s been able to show how good he really is. He’s got a lot of talent and he is very fast.”

As a 3-year-old Uncontested finished sixth in the Southwest (G3), eighth in the Rebel (G2), and was beaten less than three lengths in the Phoenix (G2). After wintering last year at Oaklawn, Uncontested joined Patterson last fall.

“He’s an older horse now and I think a lot of horses get better with age,” she said. “And there’s a few details we figured out. You have to make sure his environment is clean around him. Thing can’t he dirty, dusty.”

McCarthy, who rode Uncontested to victory at Laurel in his first start under Patterson in December at Laurel, said: “The plan was just to go and get him out and get a nice clean break with him and don’t take anything away from him. He’s kind of a funny horse. As soon as he established his lead most guys would kind of want to reach back and save a little something but with him, it’s just let him get into his stride. When he gets that big stride rolling, they ain’t catching him. He’s such a big, beautiful horse and Jenn has done such a great job with him. I’m just so thankful I get to ride him.”

“Now he can show the ability he has,” Patterson added. “For him, it’s so nice. He went out and did it just like we thought he would.”