Late-arriving I Know Nothing making up for lost time 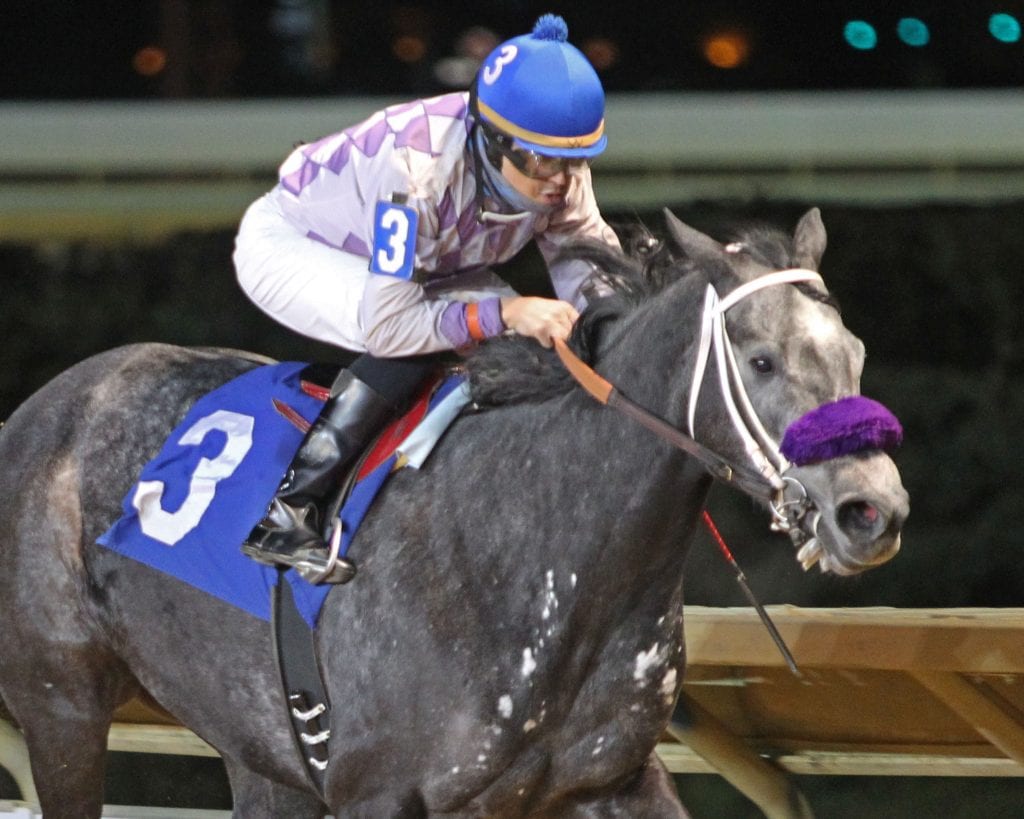 I Know Nothing won for the second time in four starts at Charles Town on January 11. Photo by Coady Photography.

Horse racing fans are always looking for the next big thing – the up-and-coming star, the talented youngster.

But sometimes, that talented youngster isn’t so young at all. Take the case of now-five-year-old I Know Nothing.

Unraced at ages two and three, I Know Nothing, owned and trained at Charles Town by Crystal Pickett, finally made the tardy start to her career last November 21 as a four-year-old, when she finished third in a one-turn maiden special weight dash for state-bred fillies and mares. The daughter of Windsor Castle was bred by James W. Casey, and Pickett purchased her privately from another trainer who had not yet gotten her to the races.

Then she had to hurry up and wait.

“I had to have the patience of a saint with her,” Pickett said of I Know Nothing, who owns two wins, one second- and one third-place finish and earnings of nearly $35,000 from four starts after prevailing last Friday as the 3-5 favorite. “When I bought her from a friend she had not been to the track. I really liked the way she looked. She’s just a really solid filly. I had her in training when she was three, but she kept having issues with her shins, so I stopped with her and sent her to my farm in Ocala, Florida for the winter.”

I Know Nothing returned from Florida last spring, and Pickett gradually put her through a training regimen that began to increase in the summer and fall when she began a modest series of workouts. But last summer’s rainy weather proved to be an obstacle in its own right.

“She probably could have had a race or two in the summer, but we had so much rain up here that there were too many mornings when it wasn’t safe to take her to the track,” Pickett said of the mare nicknamed ‘Molly’ around the barn and known for her pleasant demeanor. “I had been patient with her to that point, so there was no sense rushing her into a race. She finally got back on a regular routine in the fall and she looked good in a few workouts. Jose [Montano] worked her for me and he loved her.”

In her last pair of half-mile workouts leading up to her debut, I Know Nothing had displayed ample speed, and both Pickett and Montano expected her to break well and be in contention throughout. But she was off a step slow and rallied from midpack to finish third as the 3-1 second choice, beaten nearly three lengths by Rockstar Princess, owned and trained by former jockey Lori Bourne.

“We were both disappointed with that first start,” Pickett said. “Jose and I really thought she was going to win that night. But for some reason she just didn’t break all that well. She circled horses on the far turn but she really didn’t run as well as we hoped.”

Three weeks later in another one-turn maiden special weight dash, this time with Darius Thorpe aboard, I Know Nothing displayed speed down the backside, gained command on the turn, and held safe I B Limmey for a length victory in 52.98 for the 4 1/2 furlongs. Nine days later in a Dec. 21 allowance she finished second as the 4-5 favorite with Thorpe aboard, her third start in exactly one month.

Pickett admitted she cringed when she saw I Know Nothing listed as the 7-5 morning line favorite for her most recent outing on January 11, another one-turn allowance dash for state-bred fillies and mares. But the public backed the Windsor Castle mare with even more confidence, betting her down to 3-5. I Know Nothing rebounded from the narrow setback in her previous outing – and turned the tables on Rockstar Princess — to win by just over a length under Montano in 52.00 for the 4 1/2-furlongs, her second win in four tries.

Last year Pickett guided Dr. Feelgood to four wins in five starts, including the $50,000 Robert Leavitt Memorial for West Virginia-bred three-year-olds. She’s perhaps even better known as the conditioner of Flattering Bea, a daughter of Flatter she trained for owner-breeder James Arrison. Flattering Bea concluded her career with an 8-7-1 slate and over $440,000 banked from 31 starts, including a neck victory in the $200,000 Sugar Maple Stakes at Charles Town at age four.

I Know Nothing hasn’t tried stakes company yet, but her day may not be far off.