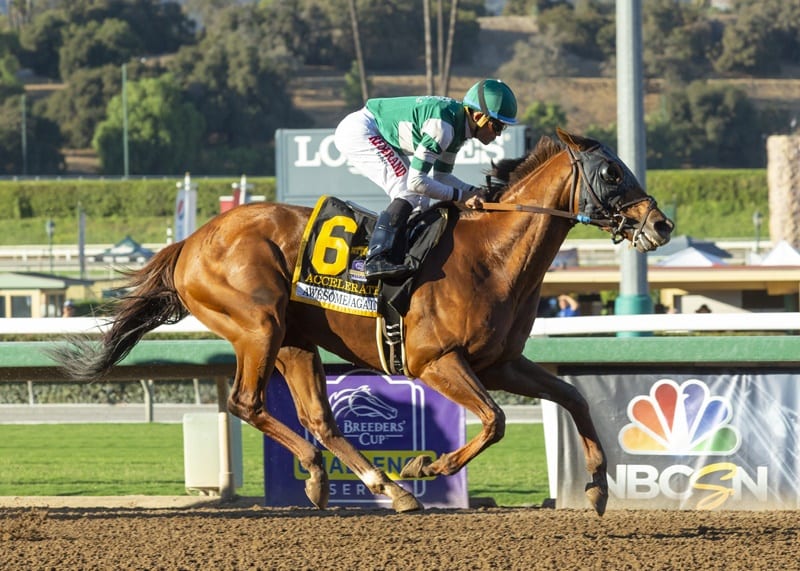 John Sadler-trained Accelerate, who capped a sensational 2018 season with a length triumph in the Breeders’ Cup Classic at Churchill Downs Nov. 3, has been rated as the 9-5 morning-line favorite in a field of 12 and will break from the No. 5 post position.

The 1 1/8-mile Pegasus World Cup will be Accelerate’s final career start before embarking on a new career as a stallion at Lane’s End Farm in Versailles, KY.

“We’re going to be a little bit sad, but happy that he has a great book of mares at Lane’s End in Kentucky,” Sadler said. “It’s a pretty good scenario. We’re just looking at it as an opening of a second career for him.”

The 6-year-old son of Lookin At Lucky showed talent right from the start of his career, debuting at Los Alamitos on April 17, 2016 and finishing second, a neck ahead of third-place finisher Arrogate, who would go on to capture the inaugural running of the Pegasus World Cup in 2018. The Sadler trainee returned later in the year to win the Los Alamitos Derby (G2) before capping his 3-year-old campaign at Santa Anita with a third-place finish in the Breeders’ Cup Dirt Mile (G1), a neck behind runner-up Gun Runner, who went on to win the 2017 Breeders’ Cup Classic at Del Mar and last year’s Pegasus World Cup.

Accelerate has kept the best of company thoroughout his career and has fared extremely well but not nearly as dominating as he was during his 2018 campaign, in which he won six of seven starts, notched four Grade 1 victories, highlighted by his triumph in the $6 million Breeders’ Cup Classic (G1) at Churchill Downs. In 22 starts, Accelerate has won 10 times, including eight stakes, and finished second or third in 10 other races, amassing career earnings of $5,792,480.

“He was a little late getting to the races. He got to the races as a 3-year-old. He was a stakes winner at 3 and he was a stakes winner at 4, but his year, at 5, he really took off. He showed he could go the classic distance in America of a mile and a quarter,” said Sadler, whose stable star won four times at the 1 ¼-mile distance last season. “He had the maturity to do it and keep doing it.”

Accelerate, a lock to be honored as the outstanding older horse in 2018 at Thursday’s Eclipse Awards dinner in Gulfstream’s Sport of Kings Theater, compiled a Horse of the Year-caliber record last year but has imposing competition for Thoroughbred racing’s top honor in 2018 Triple Crown champion Justify.

“I have nothing but respect for the other horse, obviously. He’s an undefeated Triple Crown winner, and I saw him breeze all winter at Santa Anita, my home base, so I’m pretty familiar with him. He’s a great horse,” Sadler said. “That being said, my horse was a great horse last year. He won at a mile and a quarter four times. In the handicaps, he was always the highweight. In the weight-for-ages, he was always giving weight. He spotted weight to all his rivals, which means something at a mile and a quarter, being so dominant.

“We laid out a script of the races we were going to run, and he ran in them all. He beat all the horses that came up to him,” he added. “It’s a shame Justify went to the sideline early. We were hoping we’d have a chance of meeting in the Breeders’ Cup, but it unfortunately didn’t happen. Whatever the vote, we’re fine with it. We’re just delighted with our horse.”

Joel Rosario, who won the mount when regular rider Victor Espinoza was seriously injured in a mishap last summer, has been a perfect 3-for-3 aboard Accelerate, who captured the Pacific Classic (G1) by 12 ½ lengths, the Awesome Again (G1) by 2 ½ lengths and the Breeders’ Cup Classic (G1) by a length.

The only horse to beat Accelerate last year will try to repeat that feat in the Pegasus. City of Light, who registered a neck decision over Accelerate in the Oaklawn Park Handicap (G2) last April, is rated second at 5-2 in the morning-line and will break from the No. 3 post.

Although he’s shown brilliance in one-turn races, McCarthy is confident City of Light will have no difficulty stretching out for the two-turn Pegasus.

City of Light, who will also be retired and begin his stallion career at Lane’s End, will be ridden by Hall of Famer Javier Castellano, who was aboard for his Dirt Mile romp.