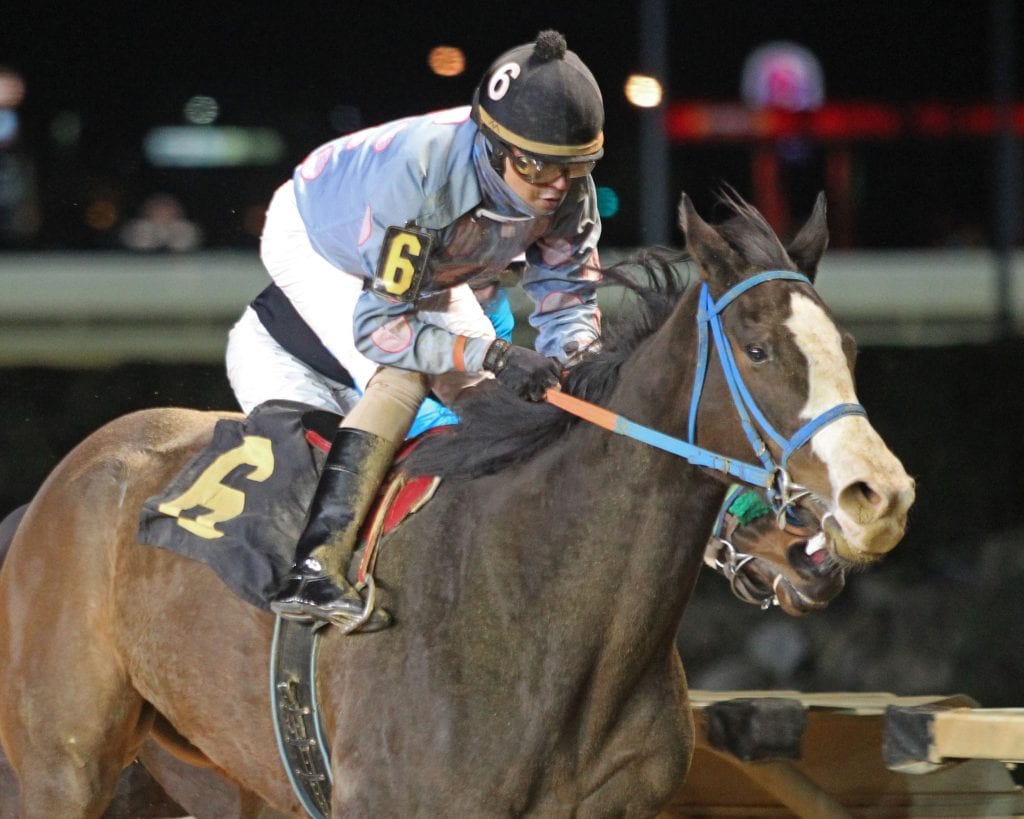 In the span of less than 24 hours January 11 and 12, B’s Wild Cork won a two-turn allowance event for West Virginia-bred fillies and mares at Charles Town and the superbly talented state-bred Late Night Pow Wow captured the $100,000 What A Summer Stakes at Laurel Park.

It was a bit of an odd coincidence, considering that both four-year-old fillies had graduated on the same card at Charles Town 16 months earlier at age two.

Perhaps a distant memory for the conditioners of both state-bred fillies, B’s Wild Cork and Late Night Pow Wow both earned their first victory in a split, two-turn maiden special weight event at Charles Town on September 23, 2017, on the undercard of the Grade 3, $300,000 Charles Town Oaks. Of course, just a year later, in September 2018, Late Night Pow Wow won the Charles Town Oaks, and she has since won two open stakes at Laurel Park for trainer Javier Contreras.

B’s Wild Cork, meanwhile, has carved out a respectable career of her own for owner-breeder-trainer James W. Casey.

“She ran a big race the other night,” Casey said. “She was picked second, but she ran really well. I didn’t think we could beat that other filly [9-10 favorite T Rex Express]. She had won two straight stakes races. My filly ran her best race so far. She’s been doing good, but there really isn’t anything else for her up here until sometime in April.”

Late Night Pow Wow graduated at first asking on the Charles Town Oaks undercard while getting the 6 1/2-furlongs in 1:22.30, several races before B’s Wild Cork would score in her fourth start in 1:22.65 for the same two-turn distance.

Their career paths, however, have largely diverged since. Late Night Pow Wow has now won 10 of 11 starts, earned just shy of $470,000, sports three open stakes victories, and will likely head into the Grade 3, $250,000 Barbara Fritchie Stakes at Laurel on February 16 as a major contender.

Although B’s Wild Cork has been unable to duplicate the accomplishments of her fellow state-bred filly, the Casey homebred does own a solid 6-6-4 slate and nearly $150,000 banked from 20 career outings. She has won five allowance races and finished second to Late Night Pow Wow in the Sylvia Bishop Memorial for West Virginia-bred three-year-old fillies last August and third behind her in two allowance races leading up to her stakes debut in the Bishop. Her efforts have not gone unnoticed by Contreras.

“She’s a nice filly,” Contreras said of B’s Wild Cork. “She’s a good-looking filly and she’s got good size to her. She’s done okay at Charles Town for Mr. Casey. She usually runs her race every time. We’ve been fortunate enough to beat her when we faced her over there. But I’m sure we’ll probably see her again this fall if we go back for the Cavada.”

The duo met for the third and most recent time in the Sadie Hawkins where the Contreras trainee drew clear late to a three-length score while B’s Wild Cork rallied from midpack to finish second at 20-1, nearly four lengths clear of See Ya Manana in third. Late Night Pow Wow would end her sophomore campaign by capturing the Grade 3Charles Town Oaks and the Cavada at Charles Town  before venturing to Laurel to prevail by five lengths in the $100,000 Willa On The Move Stakes.

B’s Wild Cork would hardly be able to match her rival’s feats over the last three months of the 2018 season, but she hardly vanished into oblivion. The Casey homebred came right back to capture a three-turn allowance at Charles Town by four lengths as the 3-10 choice, finished an unlucky fifth in the West Virginia Division of Tourism Breeders Classic, took second in an Oct. 27 allowance then prevailed in another three-turn affair on Nov. 23 before finishing fourth in a Dec. 20 allowance.

B’s Wild Cork is a daughter of Casey’s stallion Denis of Cork. She is out of the multiple stakes-winning Wild Rush mare B’s Wild Rush. With her solid success to date, she’s arrived at a challenging moment: probably not quite strong enough to take her show on the road but faced with a dearth of local options. But it’s possible she’ll end up reconvening with her division leader later in the season.

“You know, there aren’t too many races for her up here until the spring and summer,” Casey said. “She’s probably going to be good enough for the Sadie Hawkins and the Cavada in the fall, but those races are eight, nine months off. A lot can happen between now and then.”