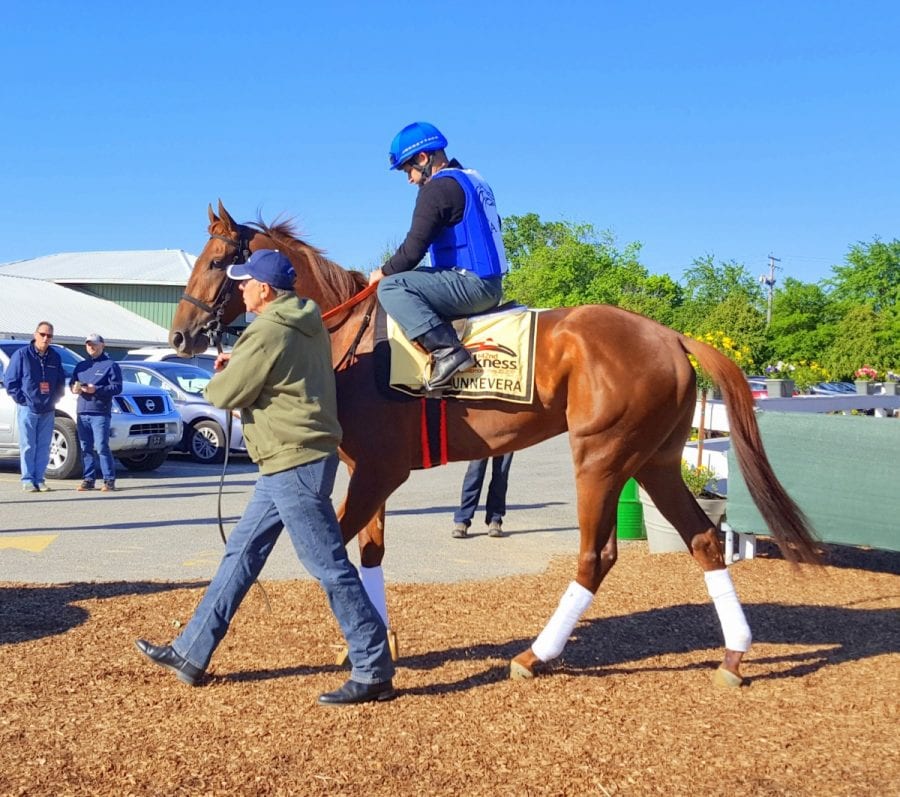 Gunnevera before the 2017 Preakness. Photo by Dottie Miller.

“I’m paying all the money myself,” said Del Valle, a Venezuelan businessman who entered Gunnevera in a partnership in last year’s Pegasus. “I’m happy to be in the race.”

“I have a good chance. He just got beat by a length in the Breeders’ Cup,” Sano said. “Maybe, there will be more speed in the Pegasus. One more chance. It’s in my house.”

In addition to Gunnevera, Hronis Racing’s Breeders’ Cup Classic winner Accelerate, Charles Fipke’s Seeking the Soul, and Calumet Farm’s Bravazo and True Timber are confirmed for the Pegasus World Cup. Tabor, Magnier and Smith’s Coolmore has also purchased a spot for a horse to be determined.

Audible, the 2018 Florida Derby (G1) winner, is also being pointed to the Pegasus World Cup and is scheduled to be entered in next Saturday’s $100,000 Harlan’s Holiday Stakes (G3) at Gulfstream to prep for the 1 1/8-mile Pegasus. Owned by China Horse Club International, WinStar Farm, Starlight Racing, and Head of Plains Partners, Todd Pletcher-trained Audible finished third in this year’s Kentucky Derby (G1).

Klaravich Stables and William Lawrence’s Patternrecognition, who defeated True Timber by three-quarters of a length in the Cigar Mile (G1) at Aqueduct last time out, is also under consideration for the Pegasus.

The Stronach Group, currently negotiating with other groups, has only a few open spots remaining.