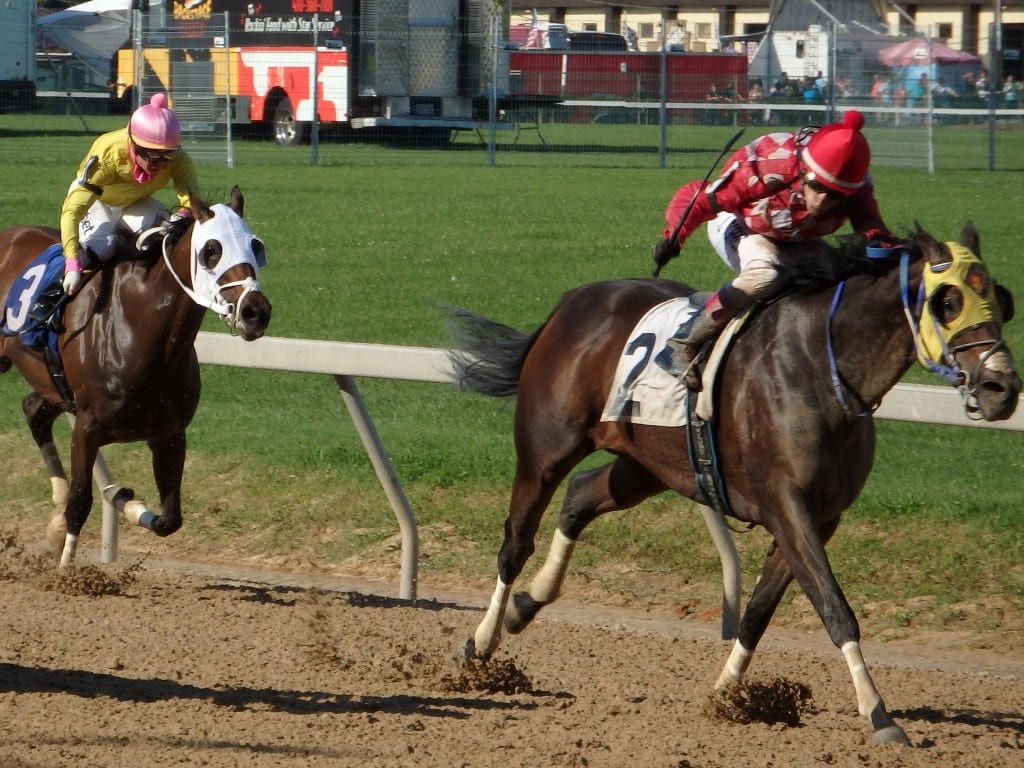 My Magician winning at Timonium in 2017. Photo by The Racing Biz.

Euro Stables’ My Magician, a three-time stakes winner last year, goes after her first victory of 2018 against 11 rivals including two-time Maryland Million Ladies winner My Sistersledge in the $75,000 Geisha.

The Geisha, a one-mile test for Maryland-bred or -sired fillies and mares three years old and up, will take place as race eight on the nine-race program.

From the barn of Laurel’s fall meet-leading trainer Claudio Gonzalez, My Magician, the 7-2 morning line choice, is winless in five tries this year but has finished third in a trio of stakes and was most recently second to Crabcakes in the Maryland Million Distaff.

My Magician won last year’s Geisha by 2 ¼ lengths, after winning the Dashing Beauty Stakes at Delaware Park and before closing her season with a victory in the six-furlong Politely Stakes Dec. 30 at Laurel, her last victory.

John and Cheryl Banner’s 4-year-old My Sistersledge (15-1) has made 18 of her 20 career starts on grass, including both victories in the 1 1/8-mile Ladies, but won an off-the-turf optional claiming allowance Oct. 6 at Laurel going the Geisha’s one-mile distance. Her Mike Trombetta-trained stablemate, 3-year-old Another Broad, will be making her stakes debut off three consecutive wins.

Sagamore Farm homebred Riley’s Choice (9-2) became a stakes winner with her front-running 2 ¾-length triumph in the All Brandy Sept. 29 at Laurel, originally scheduled for the turf but switched to a mile on the main track. In her previous start she ran fourth in the six-furlong Jameela Stakes Aug. 18 on the grass, where next-out winners Crabcakes and My Sistersledge finished second and third, respectively.

“We were planning to run her on the dirt anyway and then we saw the stake and figured it would come off so we went ahead and ran her in there and she ran really good,” trainer Horacio DePaz said. “She controlled the pace the whole way around, didn’t get too rank and was very comfortable. I’m very happy with how she ran.”

Riley’s Choice, a 4-year-old Distorted Humor filly, has earned all four of her career wins at Laurel and is three-for-four at one mile, including an August 2017 allowance victory over fellow Maryland-breds.

“With the spacing in between races, we figured we’d try the stake now and see how she does against actual dirt horses. Both times she ran against Maryland-breds and won those races they came off the turf. This time she’s actually going to face some horses that have been running decent on the dirt,” DePaz said. “It’s a tricky distance and I think she really likes it. Her running style really suits the racetrack and that type of race. The track’s been playing fair so it’ll be really interesting. This will tell us a lot about her future and where we go from here.”

Stakes winners Anna’s Bandit and Enchanted Ghost, stakes-placed Hailey’s Flip and Wowwhatabrat, and If I Was a Boy, Irish Access, Le Weekend and Victory Rally complete the field.