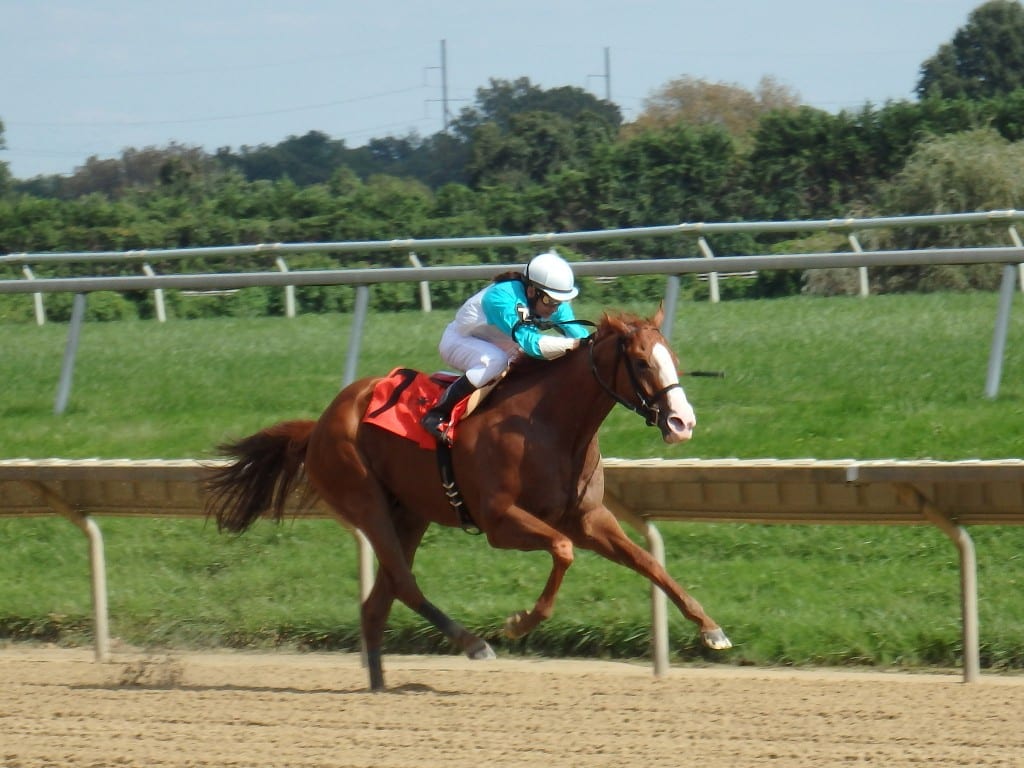 Here are three questions we’re hoping to have answered tonight:

WHICH FILLY WILL STEP FORWARD IN THE BLUE MOUNTAIN?

This six-furlong test for juvenile Pennsylvania-bred fillies has drawn a bumper crop of 12 scheduled to face the starter, including a three-headed entry from owner Tom Coulter and trainer Rodrigo Madrigal. The best of that entry (10-1 morning line for the trio) looks to be Key Light, who was second on debut and followed that up with a win over the strip against Needs Supervision, who graduated next out at Laurel Park.

But some others appear more likely. The Mark Reid-trained Please Flatter Me (8-1) won impressively — by eight lengths — at first asking against Penn National maiden special weight runners and has been training forwardly from her Pimlico base towards this.

Tara’s Talent (7-2) took four tries to break her maiden but now has won two straight, both by at least five lengths. The Ed Coletti trainee will have Mychel Sanchez in the irons. And the outside trio of I’am a Unicorn (3-1) for trainer Scott Lake, Ujjayi (9-2) for Erin McClellan, and Smarter Than U (10-1) for Ned Allard all looked good in winning their debut races.

The Blue Mountain is the second race, with a post time of 6:31 p.m.

CAN DR BLARNEY RECAPTURE HIS WINNING WAYS IN THE SWATARA?

Last year’s winner of the 1 1/16 mile Swatara for three-year-olds and up is otherwise engaged this year. Discreet Lover, who took his first-ever stake in this event a year ago, perhaps presaged his breakthrough 2018 season with that easy win as the favorite but now presumably is getting some r’ and r’ after running a respectable eighth in the Breeders’ Cup Classic.

In his absence, the win machine Dr Blarney (2-1) looms the favorite. The Massachusetts-bred Dublin gelding — a winner 17 times in 24 starts, with more than a half-million dollars in earnings — saw his six-race win streak snapped last out when he was defeated by Unbridled Juan in the Grover “Bud” Delp Memorial at Delaware Park.

Though he was defeated as the favorite in that race, the outcome was flattered when Unbridled Juan doubled up, winning the Richard W. Small Stakes at Laurel Park on November 10. A speedy sort who typically is forwardly placed, Dr Blarney’s task may be complicated by the presence of several other runners who like to run the same style; if so, a horse who might be advantaged by a zippy early pace is Monongahela (6-1), who was third in the Delp.

The evening’s featured Fabulous Strike, a six-furlong sprint for three-year-olds and up, is full of proven commodities: hard-hitting Lewisfield (3-1), speedy The Man (6-1), and late-rallying Rockinn on Bye (12-1) among them.

But there’s one horse here who, though five years old, is really just starting his career: the Lacey Gaudet trainee Mesotherm (6-1). The Trappe Shot gelding didn’t make his debut until this past April, but he appears to be making up for lost time. Mesotherm has won three straight and four of six overall.

He’s now won two allowance tests, both by at least five lengths, and his Beyer figure has risen in each of his last three starts, from 76 all the way up to 96 last time out. Alex Cintron will ride for the third straight outing.

Two other runners who might offer some value are Even Thunder (8-1) and Rockinn on Bye (12-1). While their morning line odds may accurately reflect who they’ve been in their careers, both horses were claimed last out and are switching into high-percentage barns with histories of moving runners forward. Even Thunder was nabbed last out by trainer Kevin Patterson, who is at 42 percent for the year.

And Rockinn on Bye, a veteran of over 60 races, was claimed out of his last by top Laurel conditioner Claudio Gonzalez, who strikes 32 percent of the time first off the claim.