Something Awesome set for return in Small Stakes 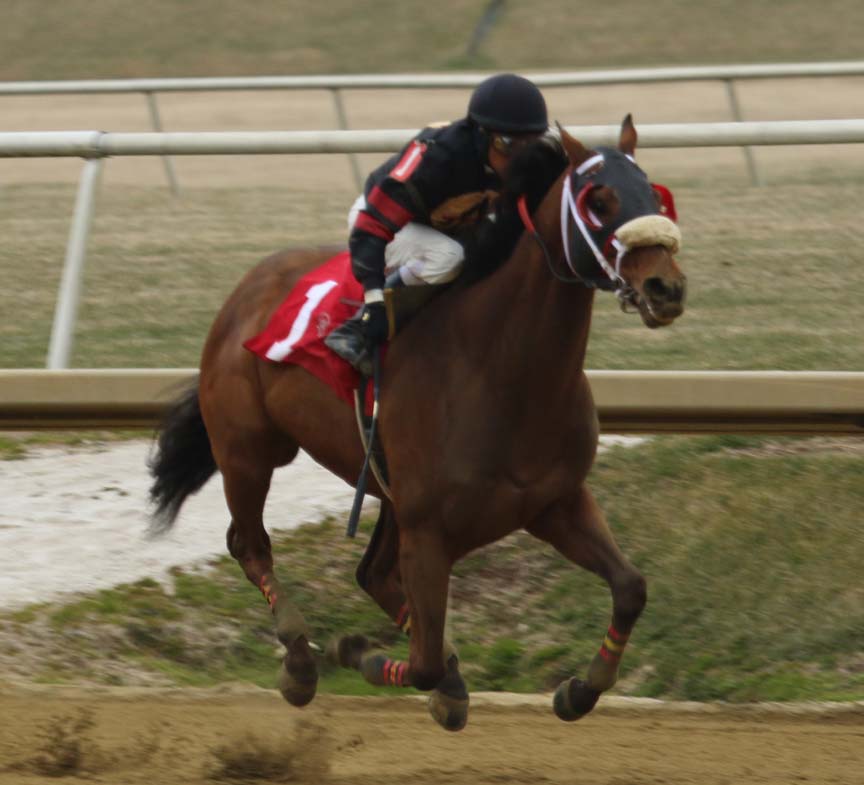 Something Awesome was much the best in the Harrison Johnson Memorial Stakes at Laurel Park. Photo by Laurie Asseo.

Stronach Stable’s multiple graded-stakes winning millionaire Something Awesome, unraced since having his three-race win streak snapped mid-May, is entered to make his comeback in a loaded edition of the $75,000 Richard W. Small Stakes Saturday at Laurel Park.

Named for the ex-Special Forces soldier in Vietnam and longtime Maryland trainer who won more than 1,100 races in a colorful career that lasted up to his April 2015 passing following a long battle with cancer, the Small drew an overflow field of 16.

“It’s going to be a tough race. It’s not an easy race anyway, but being off for a few months will make it tougher. A lot of good horses can do that, so let’s see. You never know,” trainer Jose Corrales said. “It’s important that he likes the track and the distance. He’s training well for it.”

Something Awesome, a gelded 7-year-old son of Awesome Again, won five of his first six starts after joining Corrales’ Laurel barn last fall, including successive victories in the General George (G3), Harrison E. Johnson Memorial and Charles Town Classic (G2) from February to April, the latter two his only previous tries at the Small distance.

He was sent off the favorite in the Pimlico Special (G3) May 18 but was never in contention and eased to the wire, prompting a break at Adena Springs North in Aurora, Ontario before returning to Corrales in late summer. Four-for-five lifetime at Laurel, he drew Post 12 and was assigned topweight of 124 pounds, including regular Hall of Fame rider Edgar Prado.

“He’s doing awesome right now. It took me a lot of time to be able to get him back right but even good horses can have problems,” Corrales said. “He went back to the farm for two months and then he came back and I couldn’t get him right. He was body sore or he had little issues but now we’ve got him right. He’s been training pretty good and he’s ready to have a good winter. I’m very happy now. You’re always looking to have a horse like him in the stable.”

Unbridled Juan, a 6-year-old Unbridled’s Son gelding, has two wins, two seconds and a third in five races this year, most recently a 1 ¼-length triumph in the Grover “Bud” Delp Memorial going 1 1/16 miles Oct. 17 at Delaware Park. In his only previous try at Laurel, he won an open one-mile allowance rained off the turf Aug. 3 by a head.

The day after Something Awesome ran the Pimlico Special, Unbridled Juan set the pace and was a stubborn second by less than a length in an off-the-turf edition of the historic Dixie (G3) – his first race in eight months.

“He hadn’t run for a long time when I ran him that day and he ran a big race. He’s been training good so the distance won’t be a problem. He’ll be tough in there,” Corrales said. “Unbridled Juan is a horse that’s always improving and I think he’s going to run very well. This horse is getting better every day and he acts like a good horse.”

Unbridled Juan will break from Post 5 with Alex Cintron at 120 pounds.

Three Diamonds Farm’s Bonus Points, bred but not sired in Maryland, was unable to defend his Classic title in the Maryland Million and has not raced since finishing second by a nose in a third-level optional claiming allowance Sept. 16 at Laurel. The Majestic Warrior colt has two wins and four seconds in six career tries over Laurel’s main track, the 1 1/8-mile Classic being his lone career win at the distance.

“He seems to like the track and I think he’ll appreciate the mile and an eighth like he did last year,” trainer Todd Pletcher said. “He ran a big race last time and he was a little unlucky on the head bob, but it showed he’s maintaining his form and is in good order.”

Third in the Discovery (G3) to cap his sophomore season, Bonus Points went five months between races before returning in April at Aqueduct. Three of his four races this year have come at Laurel, the exception when third in a conditioned optional claiming allowance Aug. 13 at Saratoga.

“We gave him a little freshening for the winter and he’s come back and run consistently well. He’s a horse that seems to always show up and try,” Pletcher said. “He’s versatile in terms of his running style so we’ll look to just let him settle and get into a comfortable rhythm. I’m confident he’ll get the trip.”

Feargal Lynch has the call on Bonus Points from Post 4 at 120 pounds.

Dr. Michael Harrison’s Talk Show Man ran down favored fellow multiple turf stakes winner Phlash Phelps to win the one-mile Maryland Million Turf, a race he also captured in 2014 and just his second start in 10 months. Though the majority of his 36 starts have come on the grass, the 8-year-old Great Notion gelding is also a three-time winner on dirt.

“He came out of his last race perfect. I couldn’t have asked for him to come out of the race any better. He’s been training forward ever since,” trainer Hamilton Smith said. “He likes the dirt, too. He’s won on both surfaces. I think he’s a little better on the grass, but that doesn’t mean he can’t handle the dirt. I look for him to run big, I really do.

“It’s going to be a tough spot, but he’s doing great,” he added. “It should be a good race. There’s some nice horses in there.”

Jevian Toledo is named to ride Talk Show Man from Post 2 at 122 pounds.

Drawing outside Post 14 was Jacks or Better Farm homebred Fellowship, a winner of five of 32 career races with $751,314 in purse earnings. He won an optional claiming allowance at Laurel Jan. 28 in his second start as a 5-year-old, then was a gutsy second to Something Awesome in the General George.

After trying some graded-stakes company in the spring, he was fourth in the Polynesian Stakes Aug. 12 at Laurel and most recently fourth by 2 ½ lengths in the DTHA Governors Day Handicap Sept. 29 going a mile and 70 yards at Delaware Park.

“He’s doing real well. Had a real nice work the other day, probably one of the nicest works he’s had in two or three months, so it looks like he’s coming back around. He ran a good race at Delaware in the stake so he looks like he’s moving forward. If we get a good trip Saturday we’ll see what happens,” trainer Ken Decker said. “He did real well last winter here. He kind of likes a little bit nip in the air. It looks like Saturday is going to be a little cooler so we’re hoping that we get a good trip. I think we’re going in the right direction.”