“Why we do this”: Scythe gives Condon first WVBC win 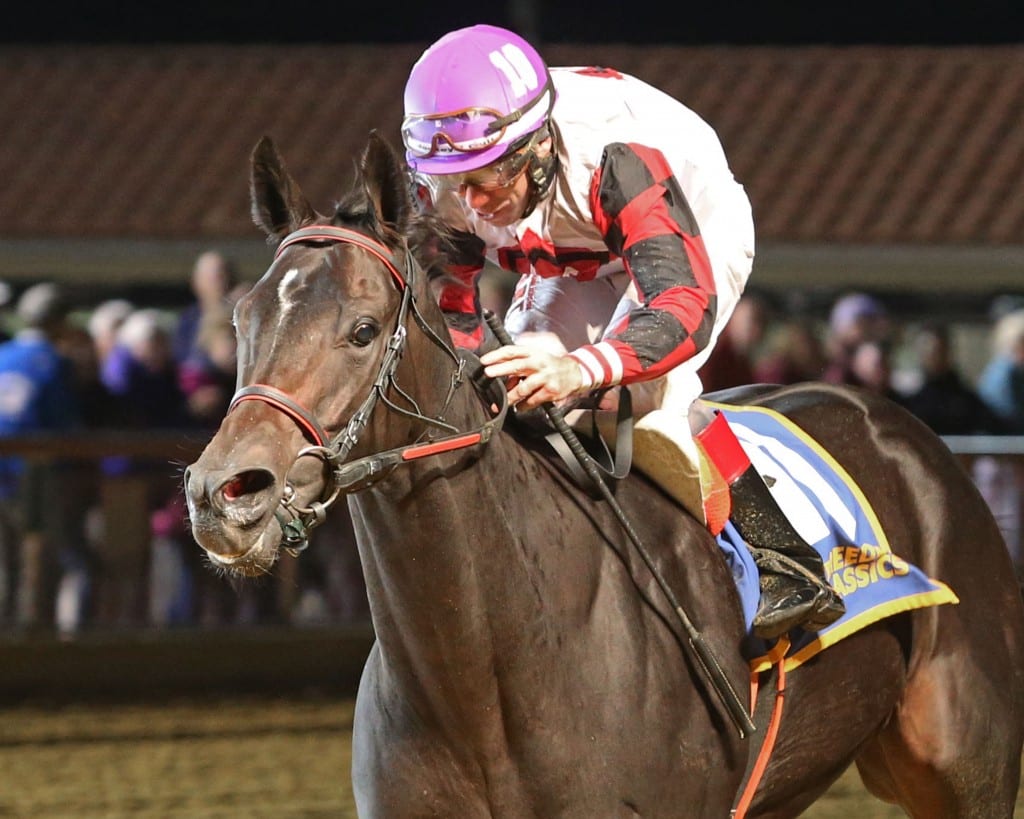 NOTE: This article was updated on October 14 at 4:20 p.m. The original version mistakenly identified an outrider who hugged Leslie Condon as Elizabeth Meehan, the trainer of the runner-up in this race. We regret the error.

In the moments after watching her homebred runner Scythe outfight Blue Plaid following a torrid stretch battle to capture the $75,000 West Virginia Dash For Cash Breeders Classics as an overlooked 20-1 shot under Victor Rodriguez, owner-breeder-trainer Leslie A. Condon summarized the experience of saddling her first Breeders Classics winner in concise fashion.

“This is why we do this,” Condon said after Scythe narrowly prevailed in 52.20 for the 4 1/2 furlongs while odds-on choice Aaron’s Tap settled for third. “I was there when he was foaled, and I pulled him. This was my first Breeders Classics winner and it’s really special. I was hoping to have him in one of these races last year, but he stepped on a shoe in the prep race and needed nearly a year off.”

Scythe had run second in the $35,000 Last Enchantment Stakes behind Aaron’s Tap three weeks earlier and jockey Victor Rodriguez admitted he was surprised when he glanced at the tote board in the post parade and saw the Condon homebred was not getting any respect, drifting as high as 25-1 before dropping a few clicks in the last few minutes of the wagering.

“When we came out on the track I couldn’t believe he was 24-1,” Rodriguez said. “We had just finished second against the same horses at this distance. I thought he had a big chance in here. We just needed to break and stay clear. Down the backside I knew [Aaron’s Tap] was not going to beat us. I knew I had the horse [Blue Plaid] just to my inside. This horse just loves to race. When we hit the top of the lane I knew I had it.”

Condon admitted that she had considered running Scythe in the Onion Juice noting that one of his two previous victories had come against state-bred allowance foes going seven furlongs in which the runner-up was In The Fairway. Scythe had then encountered trouble in the Frank Gall and Condon opted to bypass the Onion Juice last fall and give her homebred ample time to recover from a mild foot injury.

“He was definitely going in the Onion Juice last year, but he hurt his foot in the prep, so I gave him time off,” Condon said. “When he came back this year I thought his best races were in the one-turn sprints up here. I tried him a couple of times in the two-turn races, but he wasn’t quite fit for them. When I turned him back for the one-turn sprints he won an allowance race and then was second in the stakes prep, so this seemed like the best spot for him.”

As is often the case in the one-turn sprints at Charles Town, horses breaking from outside post positions generally stay clear of trouble and loom a factor late. Aaron’s Tap, hero of the $35,000 Last Enchantment Stakes here and riding a two-race win streak and having prevailed in three of his last four outings in one-turn outings, did not break sharply from post two and was in behind horses down the backside and gradually being angled off the fence entering the far turn.

But by the time Aaron’s Tap had clear sailing, Blue Plaid and Scythe had both overtaken early leader Walk to Freedom and were virtually set to decide the issue among themselves. Blue Plaid had a slight lead turning for home, but Scythe shifted gears in the final sixteenth under Rodriguez and wore down the other homebred longshot and prevailed by a neck in 52.20.

“Winning one of these races is what we all dream about,” said Condon, who has saddled six winners from 57 runners this year and sports 115 winners from 1,820 starters in her career with earnings of $1.875 million. “This horse has always done well here. He’s always trained well and Victor fits him. When he broke well and was sitting right there turning for home I knew he had a big chance. Watching him win was really special. I’ve been around this horse since he was born so this is really special.”