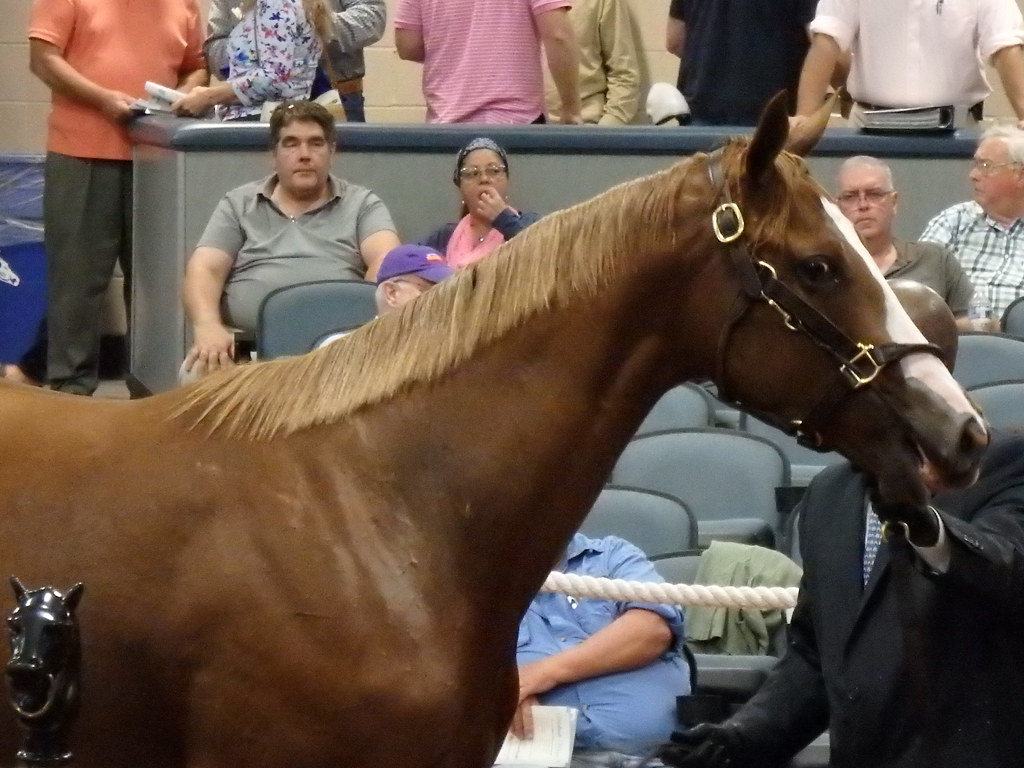 If there was one thing upon which pretty much everyone involved in the Fasig-Tipton Midlantic Fall Yearling Sale, which wrapped up Tuesday, agreed, it was that the sale looked a lot like previous Maryland sales: plenty of money for better horses and something of a struggle for middle- and lower-end horses.

Crupi dropped $200,000 on a Maryland-bred Uncle Mo colt that ultimately proved to be the second-most expensive hip sold, and his analysis proved correct. The horse he bought was one of 10 that brought at least $100,000.

The top quintile of horses sold — the top 67 in a sale in which 338 hips changed hands — accounted for more than $4.1 million in gross sales and average in excess of $61,000. That gross amounted to more than 56 percent of total sales in the day-and-a-half event.

The bottom quintile, by contrast, fetched a grand total of $127,900, with an average of under $2,000. Five individual horses sold for more than that, and the average price of the top quintile horses was 32 times that of the bottom quintile.

Cary Frommer, who snagged a couple of horses at the sale, among them a $160,000 Cairo Prince filly, said that “there wasn’t the depth I was looking for here.”

That meant, she said, that all of those who, like her, were looking to pinhook horses from this sale were likely to end up on the same handful of horses.

“Everybody’s going to be on the same top horses, so we’ll have to pay for them, but that’s OK,” she said.

Of course, with the pinhookers zeroed in on the same small group of horses, that left the end users — trainers and owners — to slug it out over those less commercially fashionable.

“Everybody talks about the polarization, and I think that’s right,” said trainer Phil Schoenthal. “What we’ve seen the last several years is once you get past $15,000 or $20,000, the competition for these horses really drops off, and there’s kind of a sweet spot for horses between $25,000 and $50,000.”

Schoenthal advised Matt Dorman’s D. Hatman Thoroughbreds, which purchased seven hips at the sale, totaling $296,000. Among those was an Imagining colt for which they paid $95,000. Three of the others they purchased fell in the Schoenthal-described sweet spot.

Those purchases represented one of the sale’s bright spots: a handful either new purchasers or purchasers playing at a higher level than previously. Dorman’s operation had shopped the yearling sales before but not at such a high level.

“If you look at it over the years, you see we’ve started buying better [catalog] pages,” Dorman said. “It’s just a part of the business plan.”

One area that poses a challenge for the sale — for now, at any rate — is the lack of commercial sires in the mid-Atlantic region. Jump Start is the region’s top sire by progeny earnings, but he’s more of a solid, “get you a runner” type than one who sets the commercial markets on fire; his yearlings average less than $30,000 overall and went for $34,800, on average, at this sale.

But there has been in the last couple of years an influx of new sires to the region, particularly Maryland and Pennsylvania, and at this sale, the market seemed at least open to them.

“We’ve got a lot of Maryland first-year sires that aren’t getting the attention they’re going to deserve later on,” Frommer said.

Three of the top five sires by number of horses sold — Golden Lad, Imagining, and Bourbon Courage — are newcomers whose oldest offspring are yearlings this year. All three had at least one sell for $40,000 or more, and all three averaged better than $19,000. They were topped by a Golden Lad filly who went for $120,000 and the Imagining colt purchased by D. Hatman.

“That is really encouraging for this area for the breeding farms,” Bennett said. “It’s good to see these people get rewarded for what they brought to the marketplace.”

In the end, 193 different purchasers left with new horses. The sale’s average and gross were down.

“It’s like a lot of the sales are here. It’s spotty,” said David Wade, whose Northview Stallion Station consignment sold 21 horses, including the Uncle Mo colt. “You can bring a good horse here and stand out a little bit, but there are a lot of horses here that are just struggling.”

At the same time, the sale’s median was up a tick, and the buyback rate fell. Plenty of horses through the ring will get their shots, either back in the ring next year to be pinhooked or racing for their new connections.

“This is a sale that’s been so good to me,” Frommer said. “Every single year, I’ve bought either Grade 1 horses out of here or sale-toppers. I love the Timonium sale so much.”

Of course, she’s playing at the top end of the regional marketplace. But, she added, pointing to the low buyback rate, “One thing I’ve noticed is the horses are selling. People are letting them go, they’re getting them sold for the most part. They’re probably selling for their value.”