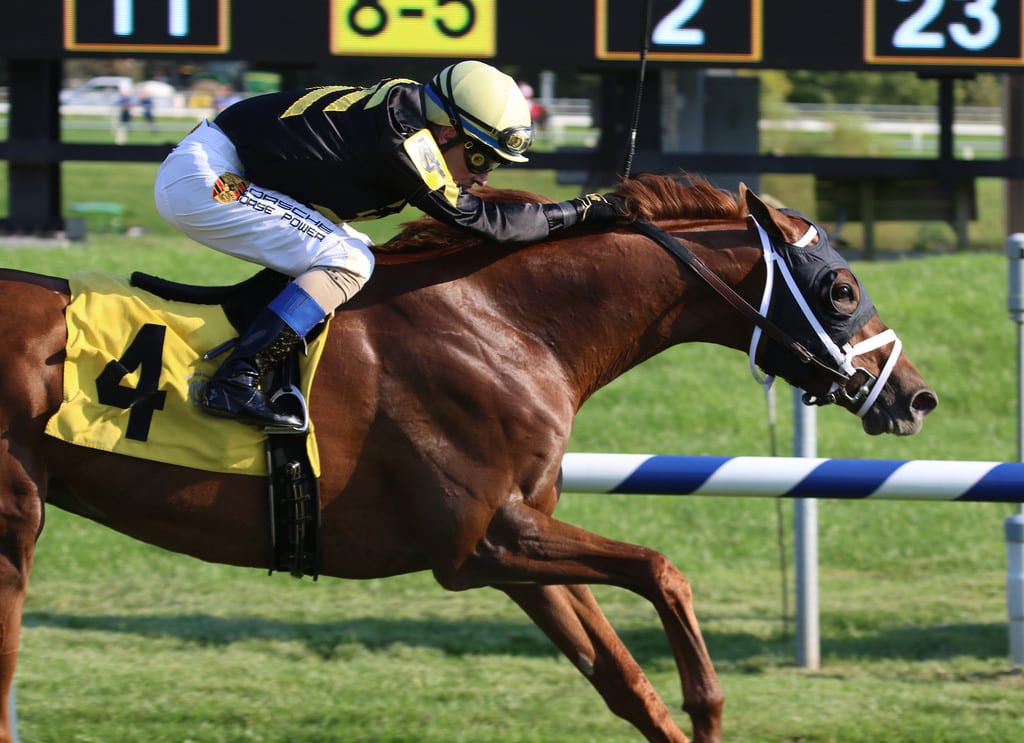 It was quick and it was over.

Jockey Feargal Lynch swept past the pacesetter Neepawa around the final turn aboard Calumet Farm’s Channel Cat and left nine opponents in his wake on his way to a 5 ¾ length victory in Saturday’s inaugural running of the $150,000 Bald Eagle Derby at Laurel Park.

Channel Cat, a 3-year-old son of English Channel trained by Todd Pletcher, entered the Bald Eagle off a victory Sept. 12 in the Dueling Grounds Derby. Fourth in the Belmont Derby Invitational (G1) in July, Channel Cat covered the 1 ½ mile yielding turf course in 2:40.47. It was the colt’s fourth win in 12 starts.

“Early on in the race he wasn’t using up much energy,” Lynch said. “It was only when I asked him at the three-eighths he really kicked in.”

Lynch, who walked the turf course earlier in the day, said he looked up at the infield television screen the first time past the grandstand aboard Channel Cat and saw a 51 half mile. “That was nice and slow,” he said. “I knew I had to make a move and wanted to get the momentum.”

The addition of the Bald Eagle to Laurel’s fall stakes schedule drew praise from horsemen seeking a much-needed, late-season 1 ½ mile turf event for sophomores. Trainer Todd Pletcher, who saddled Channel Cat, said he was “happy to see it on the calendar.” Trainer Mark Casse, who entered Neepawa, added the Bald Eagle was a “welcome addition” to the schedule.

In other stakes Saturday:

In the $75,000 Challedon over seven furlongs for 3-year-olds and up going seven furlongs, Jacks or Better Farm’s graded-stakes placed Old Time Revival got up in the final jump to beat 50-1 shot Perfect Cover. Tour de Force was third.

Old Time Revival, trained by Ken Decker and ridden by Rosario Montanez, covered the distance in 1:21.25. Earlier in the year Old Time Revival, a 3-year-old son of Brethren, was second in the Gotham (G3) at Aqueduct.

“He’s been a nice colt from the beginning,” Decker said. “He’s had some issues. Looks like we got them straightened out. He loves this racetrack.”

Favored Cairenn, a 4-year-old filly trained by Graham Motion and ridden by Jorge Vargas Jr., drove past Tweeting in deep stretch to win the $75,000 Shine Again by a half-length, covering seven furlongs in 1:22.11. Angel At War was third. Cairenn came into the Shine off an eighth-place finish in the Ballerina (G1) at Saratoga.

In the $75,000 All Brandy, moved from a 1 1/16 mile turf race to a mile on the dirt, Sagamore Farm’s Riley’s Choice led gate-to-wire under jockey Trevor McCarthy to win by 2 ¾ lengths while covering the distance in 1:36.56. Fourth in August in the Jameela, Riley’s Choice beat favored Majestic Reason. Saint Main Event was third.