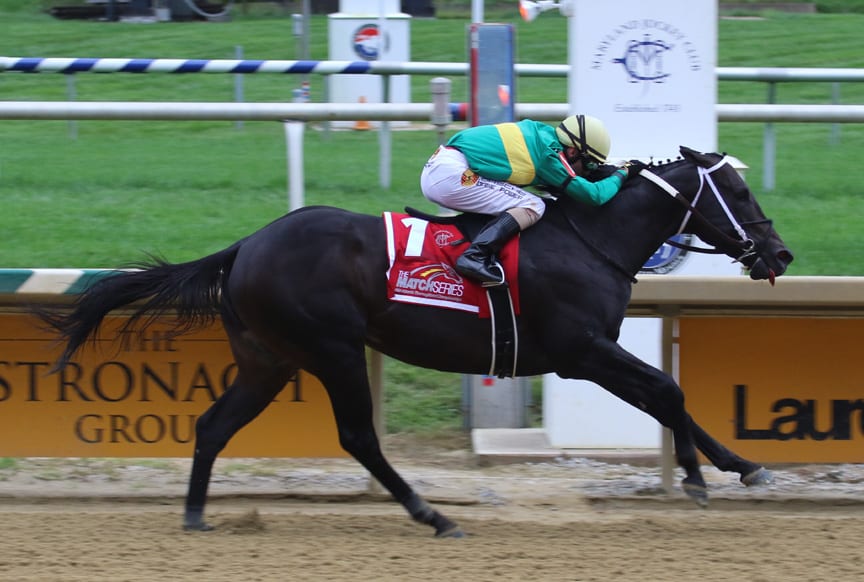 Jockey Feargal Lynch won two turf stakes on Saturday at Laurel Park, but it was a dirt horse that he said “feels like a turf horse” that gave him the biggest win of all.

Lynch and Switzerland, a Speightstown colt trained by Steve Asmussen, grabbed the lead early and went on to win the $250,000, Grade 3 Frank J. De Francis Memorial Dash by 2 3/4 lengths at Laurel Park. The win was Switzerland’s fifth in 13 starts and pushes his earning past the $400,000 mark.

“For me, he feels like a turf horse,” Lynch said. “He ran once on the turf and was only beaten I think three lengths. He has that daisy cutter action. He is so, so natural and so speedy.”

Switzerland broke alertly but not quite as quickly as Colonel Sharp, who bounced away first of all, or Laki. But Lynch quickly had the four-year-old colt into stride, and, breaking from the rail, he was able to attain a narrow lead through the opening quarter-mile in 22.83 seconds.

“He doesn’t always break that sharp,” Lynch said, adding that trainer Steve Asmussen had told him not to rush the horse.

Switzerland led the field by a length after a half-mile in 45.72 and by three-and-a-half leaving the furlong grounds. None of his rivals could make up much ground, and the margin was nearly three at the wire, with the Maryland-bred Laki, trained at Laurel by Damon Dilodovico, earning a clear second. Late-running Sweetontheladies, antsy in the starting gate with Gary Stevens in the irons, was along for third.

“It took him a while to switch leads,” Lynch said. “Not until I think it was the 16th pole did he switch, and then he found something more.”

Switzerland stopped the clock in 1:09.11 for six furlong over the fast main track and returned $5.60 to win as the 9-5 post time favorite.

It was the second graded stakes win for Switzerland. He took the Grade 3 Maryland Sprint in May at a rainy Pimlico but in his follow-up, in the Grade 1 Vanderbilt at the Spa, he was a well-beaten fifth.

But Lynch said one thing was clear.

“This is a really nice horse, a serious horse,” Lynch said.

How did it feel to win three?

More seriously: “It feels great. These are the days; this is what it’s all about,” he continued. “The owners and trainers put a lot of trust in me on these days.”

Bran Jam Stable and David Clark’s Order and Law, who made his debut in the Tyro last month, rallied from last on Laurel’s Fort Marcy Turf Course Saturday to break his maiden in the $100,000 Laurel Futurity sponsored by B & B Commercial Interiors.

A 2-year-old son of Violence bred by Dell Ridge Farm in Kentucky, Order and Law finished fourth in the Tyro at Monmouth in his debut before finishing second in a maiden special weight event Aug 26 at Parx. Breaking from the No. 14 post Saturday, Order and Law trailed down the backstretch and entering the turn while Mooji Moo Jr. was pressed past a :23.44 opening quarter by Regally Irish and a :48.67 half by Veterans Beach.

As Scrap Copper was taking the lead from Veterans Beach an eighth of a mile from the finish, Order and Law kicked into gear and drove down the middle of the course, just getting up at the wire to beat Scrap Copper.

“We’re thrilled to see him get up,” Linder said. “I knew he would come running, especially with the soft going. I saw him coming, then he went out of the picture. Then I saw him coming again and I knew we had a shot.

“He showed a lot of talent from the beginning, and moving forward I think he’ll get better with more distance. We’ll look at a race at Keeneland That would probably be our next move.”

Edward Short’s Class and Cash, usually a pacesetter, closed from well back on the Fort Marcy Turf Cup to win the $100,000 Laurel Turf Dash presented by Fidelity First.

Trained by Jane Cibelli and ridden Feargal Lynch, Class and Cash got up along the rail inside the final 70 yards to win the six furlong event in 1:14.04. Dubini was second and Fielder checked in third.

“He always gives 100 percent,” said Cibelli’s assistant trainer Matt Hartman. “He got shuffled back a little further than I thought, but he always tries. It wasn’t really a concern at the start but turning for home he was a little further back than I should he should have been, but he found his way through. He’s a wonderful horse.”

While longshot Celebration was pressed past a :23.22 opening quarter by Dubini, Class and Cash raced 10th. Entering the stretch Dubini took the lead but Class and Cash drove up along the inside under Lynch to take the win.