Timonium: “Too expensive” Colonel Sharp up to win Coalition 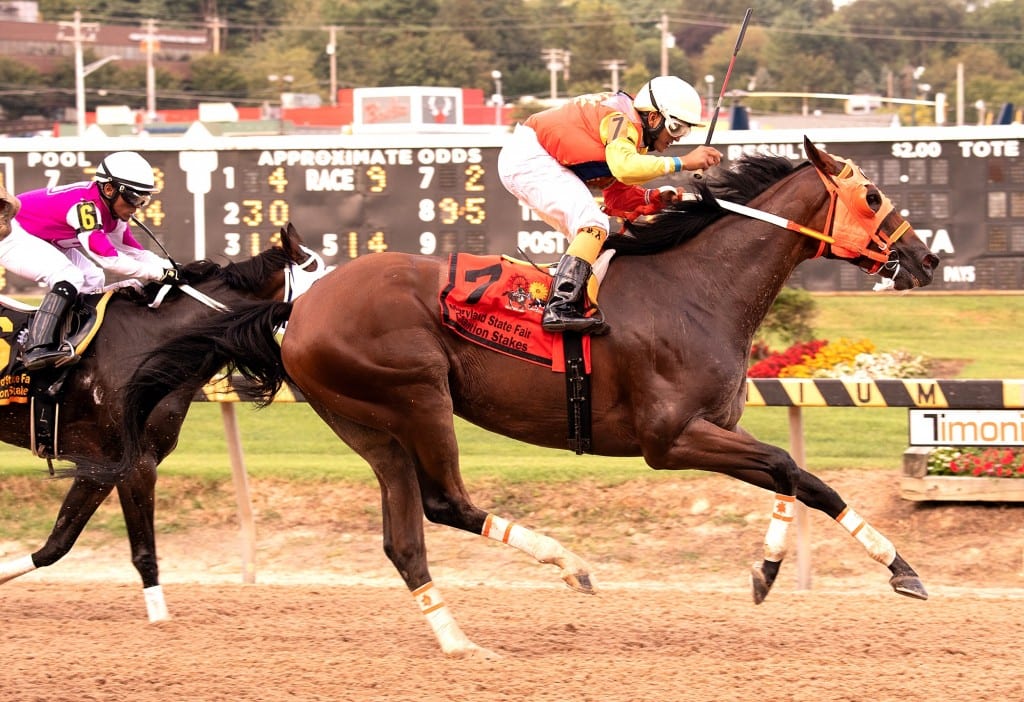 Colonel Sharp was along outside to win the Maryland Coalition Stakes. Photo by Jim McCue.

After today’s $75,000 Maryland Coalition Stakes at Timonium, that’s looking like an increasingly astute purchase. The five-year-old Colonel John gelding surged past longtime leader Union Blues and went on to win by three parts of a length over the late-on-the-scene Rockinn On Bye, with Union Blues hanging onto third.

And to think: trainer Hugh McMahon was… well, let’s just say, less than enthusiastic about the purchase.

“I didn’t know my owner was bidding on him,” McMahon said following the Coalition. “Our vet said to keep clear of this one. When they bought him, I said, ‘Oh, no, you paid too much for him.'”

Colonel Sharp had won two allowance tests earlier in the year and in his last two starts, he’d run third against stakes rivals. Last out, in the Senator Robert Byrd Memorial Stakes at Mountaineer, he had run a solid third, beaten just a length-and-a-half. Runner-up Woodland Walk returned to win an allowance at Thistledown, while winner Heartwood was sixth — though beaten less than four — in the Grade 1 Forego Stakes at Saratoga.

“Though he had some traffic, those were worthy efforts,” McMahon said.

Today under J. D. Acosta, who won three times on the day to assert control over the jockey standings, Colonel Sharp attained a comfy spot in third a couple lengths behind the early speed of Union Blues, who was pressed by Even Thunder.

Acosta and Colonel Sharp began to move forward midway up the backstretch in the two-turn contest as Even Thunder gave way. He circled the turn three wide and surged through the lane for the win.

“It was perfect,” McMahon said of the trip Acosta gave his horse. “Stalk, save ground on the first turn. He’s progressive.”

BIG T NOTES With two days left in the meet, Acosta now has six wins and a two-victory advantage over his nearest competitors, Erin Walker and Angel Cruz… Gerald Brooks retains the training lead with four, one more than Joan Reynolds in second… Four horses have now raced twice at the Big T — Pedir La Luna, Freedom Storm, Our Gal Mal, Lori’s True Passion — but none has won… The Jackpot Pick 6 has a $736 carryover heading into Sunday…