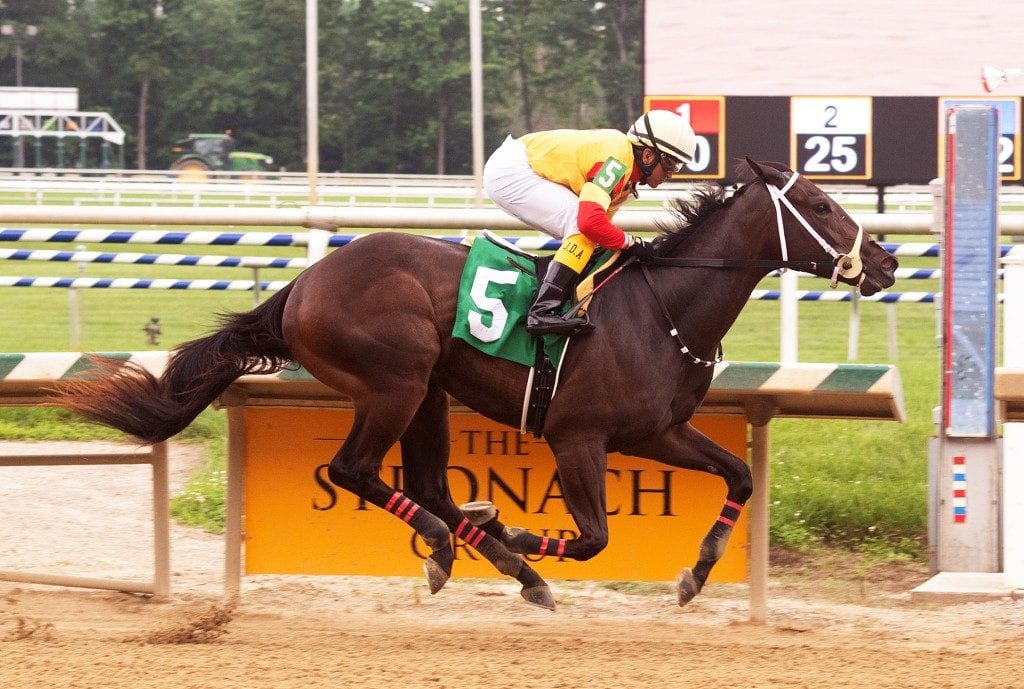 When Congrats Gal broke her maiden at Laurel Park in June, trainer Cal Lynch said that he thought the two-year-old daughter of Congrats “might be a Schuylerville-type filly,” referencing the Grade 3 fixture contested on Saratoga’s opening weekend.

That turned out to be accurate. Sent off at 14-1 in the Schuylerville, Congrats Gal dropped back but came again to earn third. While she was four lengths behind the winner, Catherinethegreat, she fell just less than a length behind the place horse, favored Nonna Madeleine.

With graded black type under her belt, Congrats Gal is slated to hunt the first stakes win of her brief career in Wednesday’s $50,000 White Clay Creek Stakes at Delaware Park. The 5 1/2-furlong test is carded as the eighth race of the card, and Congrats Gal, owned by Charles Biggs, has been installed as the 3-2 favorite on the morning line. J. D. Acosta, who has ridden her in each of her two starts, has the mount.

While Congrats Gal is a deserving favorite, though, the White Clay Creek nevertheless offers some intrigue. Jaywalk, a Cross Traffic filly from the powerful John Servis barn, is 9-5 on the morning line. She has a first and a second from two starts, most recently breaking her maiden with an easy seven-length score in the mud at Parx Racing July 24. That was her first try with Lasix, and, lest you think she’s simply a mudlark, in her debut she ran second, beaten about three lengths by the aforementioned Nonna Madeleine, the Schuylerville runner-up. Joshua Navarro has the mount.

Two other fillies here also have stakes experience. Hay Dilly (6-1) was a fading fourth in the Debutante at Churchill Downs back in June and more recently was fourth against allowance foes at Laurel Park. Top rider Daniel Centeno will ride for trainer Kelly Rubley. And Harbour Way (4-1) finished sixth in the Colleen Stakes at Monmouth Park. Albin Jimenez is named to ride for trainer Kelly Breen. Both fillies broke their maidens at first asking.

Start the Show (12-1), for trainer Michael Catalano and rider Trevor McCarthy, and Group Text (8-1), for Servis and Frankie Pennington, round out the field. Both won at first asking.

Arabian handicapping is provided by our friends at Arabian Finish Line.