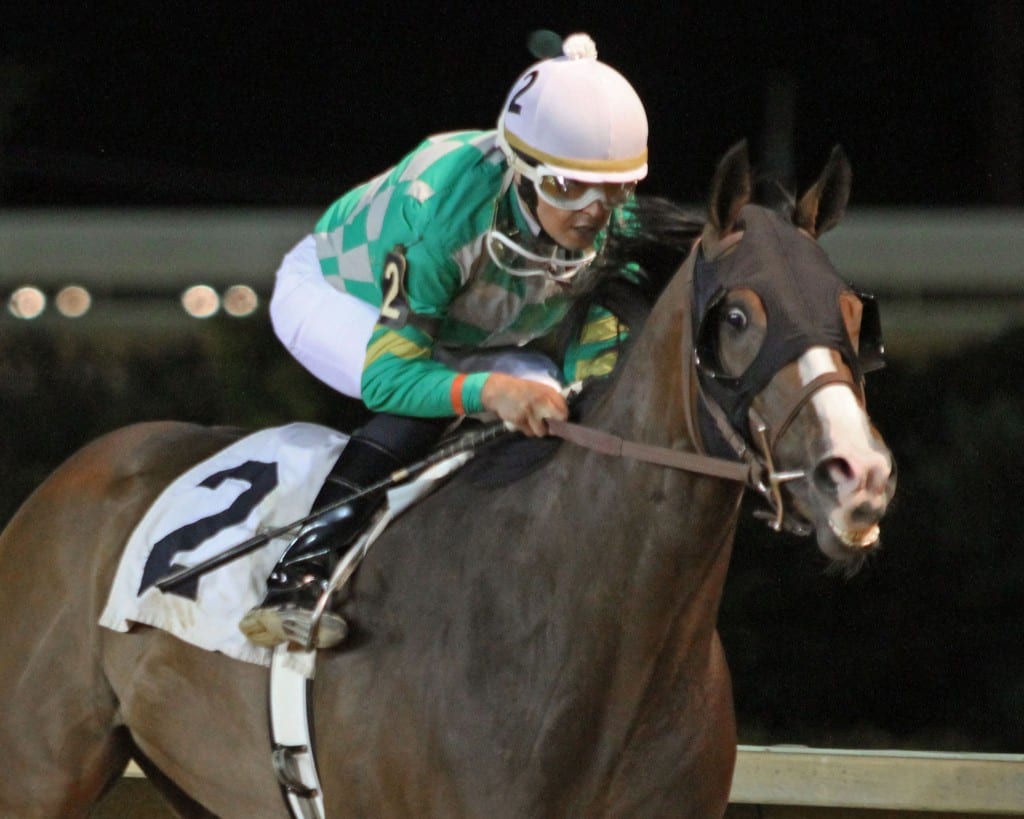 Natural Odds broke his maiden at Charles Town on July 7 with Jose Montano up. Photo by Coady Photography.

In the span of exactly one week, trainer Chris Kolb and his wife, Nancy Jo Kolb, watched a pair of their homebreds find the winner’s circle at two different tracks in what proved to be a good week for them and their productive broodmare, Naturally, who had a daughter win at Laurel Park and a son score at Charles Town.

In the second half of a split maiden special weight for West Virginia-bred three-year-olds and upward on July 7, Natural Odds surged to command through the clubhouse turn and then easily lived up to his role as the 3-10 favorite when he drew clear from 5-2 second choice Sunbridled to score by just over four lengths while getting the 6 1/2-furlongs in 1:20.34. An hour earlier, Rockaround prevailed narrowly in the other division over odds-on Carter’s Run in 1:21.31, basically a full second slower.

Natural Odds had briefly been on target for making his career debut last fall at age two, but the sophomore son of Despite the Odds out of the Thunder Gulch mare Naturally encountered several “hiccups” which prevented him from making his bow as a juvenile. Kolb put the homebred back in training this spring at the Middleburg Training Center not far from his home and watched the gelding quickly regain his freshman promise.

“Even last year at two he showed us that he had the ability,” Kolb said. “He had a few minor issues and he really needed to mature a little bit, so I stopped with him and gave him the winter to grow. He came back in the spring really good and he was training great for his debut. He was never really quick, but we wanted to get him a start and get him some experience racing other horses under the lights, so I entered him in that 4 1/2-furlong race last month. It turned out like we expected, but I thought he ran really well.”

Sent out as an overlooked 19-1 shot in the one-turn dash for state-bred three-year-olds on June 14 with Gilberto Rodriguez aboard, Natural Odds broke last and trailed the field briefly, then launched a six-wide bid through the far turn while passing foes and rallied to finish second, a nose better than Purgatory and only a length back of winner Pagan Smart. Carter’s Run, the 3-1 second choice in that event, finished sixth, beaten eight lengths, before coming back to run second in the opening split on the July 7 card.

Heading into the second half of the split maiden special weight affair on July 7, much of the attention focused on Natural Odds, the prohibitive choice under former Eclipse Award winning apprentice, Jose Montano, while Sunbridled, second as the 2-1 second choice in a two-turn maiden special weight event last month, was the solid 5-2 second choice again. Sunbridled had exited the same race in which Rockaround, narrow winner of the opening split on this card, finished fourth, beaten 10 lengths.

Natural Odds and Sunbridled both broke well and virtually had the race to themselves. Despite not showing any early speed in his debut, Natural Odds gained command along the inside through the clubhouse turn and kept Sunbridled at bay down the backside. Natural Odds opened a clear lead with just over a quarter-mile remaining and the Kolb trainee cruised home four lengths clear of Sunbridled to score in 1:20.34 for the 6 1/2 furlong distance.

“He’s not really quick, but he showed enough speed leaving the gate that Jose sent him through to get the front,” Kolb said. “He was moving really easily on the far turn, but Jose said he was still a little green and looking around a little bit in the lane. He’s still learning. That was only his second start and his first try going two turns, but he did well.”

Natural Odds is scheduled to make his next start July 21 in a seven-furlong allowance at Charles Town on July 21. He’s 8-1 on the morning line, and Kolb said that, depending on how he performs in that event and comes out of it, bigger prizes may beckon.

“We’re going to try him in that allowance here next Saturday,” Kolb said. “It’s a little close [to his most recent start] but there’s nothing else for him for a while. If he runs well there and comes out of that race really good, we’ll try him in the Leavitt. There are always some good ones waiting in the wings there, too. He’s eligible to the Breeders Classics, so hopefully he will stay on target for that race on the big night. He’s young and he’s still learning, but he’s definitely got the ability.”

Among the runners he might see in the Leavitt are William and Mary and Opera Nite, speedy sophomores who ran one-two in the Coin Collector Stakes at the track in April.

Just a week earlier, the Kolbs had kicked off the week in style. Natural Notion, a four-year-old daughter of Great Notion and the older half-sister to Natural Odds, returned from nearly a full year layoff to win a $40,000 waiver-maiden claiming race at Laurel Park on June 30 by six lengths by getting 5 ½ furlongs on firm turf in 1:01.69 as an 8-1 shot. Natural Notion had been idle since a runner-up effort in a July 7, 2017 outing at Laurel.

This time, the Kolb homebred returned fresh and fit for her delayed four-year-old debut and won handily for the husband-and-wife tandem. The two siblings are part of the reason that Kolb small stable has been clicking along nicely this year, with five wins from just 14 starts.

“She’s had her fair share of minor issues over the years,” Kolb said. “But I still think she can do well over there. It was a great week for me and my wife and for that mare. We’re hoping to have a few more like that this summer.”