Laurel Park: After a year, Waterhaven returns a winner 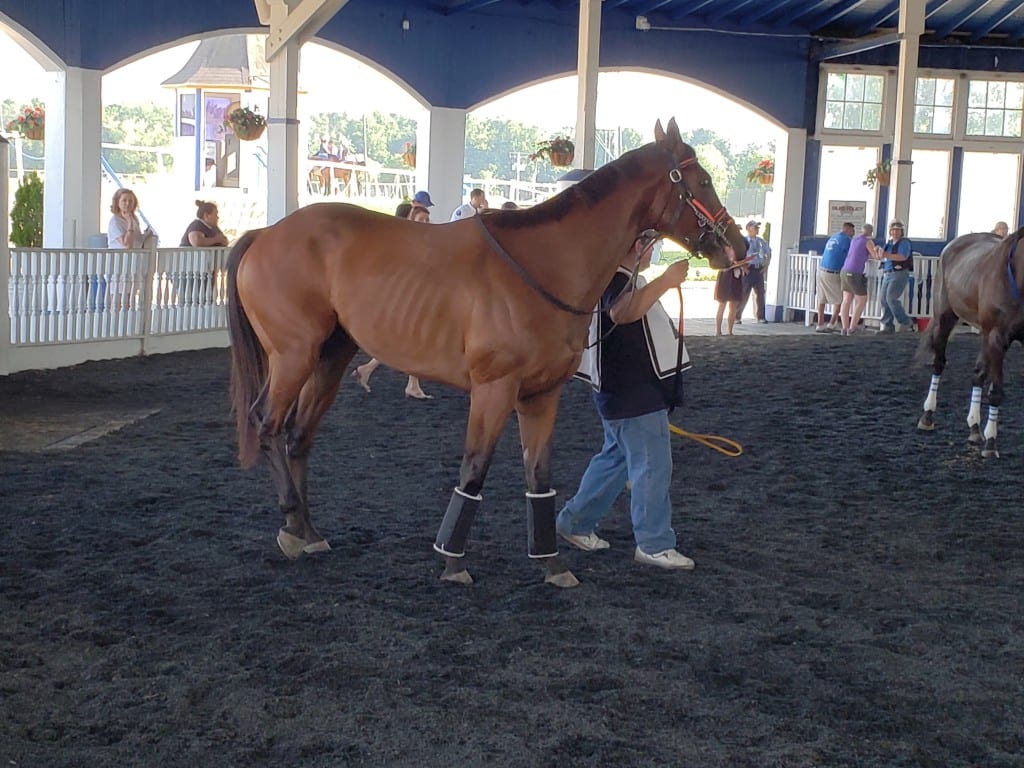 Waterhaven in the paddock before breaking his maiden at Laurel Park. Photo by The Racing Biz.

The astute handicapper had to have some questions about Waterhaven in the tenth race at Laurel Park: specifically, what was he doing in this bottom-level maiden race? And why was Hall of Fame rider Edgar Prado on board?

The short answers: winning, and because this is no ordinary $10,000 maiden.

The John Salzman, Jr. trainee, owned by his wife Marla, blitzed his 11 rivals, romping to an 8 1/4-length victory in 1:03.92 for 5 1/2 furlongs over a fast main track that played very much to that description.

“He’s a nice old, classy horse,” Salzman said afterwards. “He’s just got so many problems  – he’s just got a lot of problems. He’s a nice horse, though.”

Sent off as the 8-5 favorite, Waterhaven zipped up the rail to the early lead, had a two-length advantage after an opening quarter-mile in 22.50 seconds, and drew readily clear in the lane before Prado geared him down in the final half-furlong.

A four-year-old Leroidesanimaux gelding, Waterhaven debuted June 11, 2017 at Laurel, drawing clear late to win a maiden special weight test by almost two lengths. But he was disqualified for bumping a rival and placed third that day. Still, he seemed to have limitless potential.

“He ran last year and showed like he was a superstar and got DQed,” Salzman recalled. “Honestly, I was going to take him to Saratoga and try to rebreak his maiden up there. But he just couldn’t make it, so we give him a year off, brought him back.”

Waterhaven ran in 2017 in the colors of Vineyard Racing Stable LLC who, Salzman said, gave the horse to his wife because she liked him so much.

He entered today’s race boasting a solid work tab and the back class to tower over these rivals. So why drop to the bottom?

“To make it easy on him,” Salzman said. “You don’t want to put too much pressure on him.”

Which, it’s safe to say, is exactly how it played out.

NOTES Big Lick Farm’s Antoaneta emerged from a stretch duel with Sophia Is an Angel a head in front at the wire in Sunday’s ninth race to give trainer Carl Allsop his first career victory. Jorge Ruiz had the mount… More big payouts on the day included 87-1 Aunt Mitzi in the third race, a $16,000 maiden claimer on the turf, and 24-1 Nancy R in the same condition two races later… Chateau de Vizille won the sixth race for trainer King Leatherbury, giving the conditioner win number 6,499.