Delaware: Controversy brews in wake of decision on assistant starter 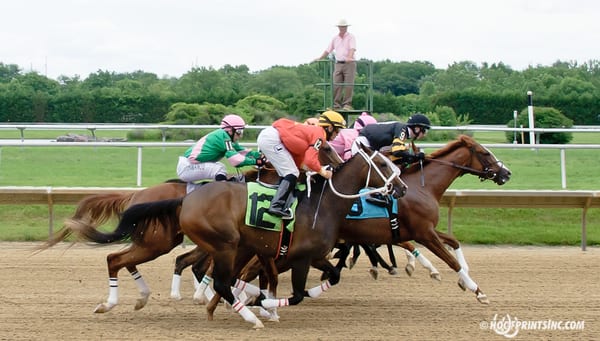 And they’re off! Photo by HoofprintsInc.com.

The Delaware Thoroughbred Racing Commission stewards’ decision not to pursue additional penalties against assistant starter Jesse Kisilewski in the wake of a June 14 controversy has sparked a social media firestorm – but also has been strongly defended by the Commission itself, the Delaware Park racetrack, and some who make their living on horseback.

And now the animal rights group People for the Ethical Treatment of Animals (PETA) has also weighed in.

In the June 14 incident, a three-year-old gelding named Accolade, trained by former jockey Abel Castellano, became fractious in the starting gate, bucking and rearing and placing himself, jockey Daniel Centeno, and Kisilewski in a dangerous position.

Kisilewski took a number of steps to correct the horse and in a video that went viral, appears to hit the horse several times and then shove its head against the side of the stall.

The official Equibase chart noted the horse had been “struck several times” before the race went off, the state Racing Commission immediately announced it would look into the matter, and Delaware Park racetrack, which employs the gate crew, suspended Kisilewski pending the outcome of his hearings.

That outcome was announced nine days later, June 25: no further discipline against the assistant starter. That means he can return to work after having been suspended for six live racing days.

At which point, the long social media knives came out.

I will no longer be wagering at Delaware Park. #BoycottDelawarePark

“A travesty,” said one tweet. “Four punches to face of horse is okay at Delaware Park,” lamented another. “Absolutely appalling,” said a third.

And many claimed they would not bet the track again.

But Delaware Thoroughbred Racing Commission chairman Duncan Patterson defended the decision-making process in a statement emailed to The Racing Biz. Among other things, he pointed out that not only did the stewards review the incident, so, too did the state’s animal cruelty investigator.

The investigation, the statement said, involved video review, interviews with those involved, and conversations with people “knowledgeable regarding the standard protocols of handling a fractious horse in the starting gate when a horse becomes a danger to the jockey and/or assistant starter.”

When the dust had settled, “the assistant starter was cleared of any wrong doing,” the statement said.

“I feel that justice has been done,” Mooney said. “He used all the techniques that starters have used for the last 50 or 60 years. The rider was in a very dangerous setting, and when you really take a serious look at it, he used the flat of his hand and fingers to control the horse.”

According to Mooney, in a situation like that, the assistant starter tries to distract the horse and cause it to focus on him, rather than on whatever has agitated him “to keep him from making these erratic movements.”

“He’s got a very good reputation,” Mooney said of Kisilewski. “He’s very respected by all the jockeys and the horsemen.”

When he finally settled, Accolade broke well enough and was close to the lead in mid-pack in the early going in the $34,000 maiden special weight race before fading to sixth of seven – just about where his 8-1 odds would have predicted. Accolade, owned by Glenn Fagan, is winless in eight career starts.

The Commission’s defense, however, rang hollow to PETA, which asserts that “animals are not ours to eat, wear, experiment on, use for entertainment, or abuse in any way” and has served as an often-sensationalistic gadfly to the industry in recent years.

In a letter emailed by PETA Sr. Vice President Kathy Guillermo to Commission Executive Director John Wayne and provided by PETA to The Racing Biz, the group calls on the Commission to reconsider its ruling.

“You’ve now sent a clear message to people who love racing and horses,” the letter said. “Sometimes it’s okay to punch a horse again and again in the head.”

Accolade was examined by the state veterinarian following the June 14 race and showed no signs of injury, according to Mooney. The horse has been placed on the starter’s list and will need to demonstrate improved gate behavior before being allowed to race again.

At least some jockeys registered support for the Commission, and the assistant starter.

Exercise rider Nick Petro, a former jock, joked that, “They executed [Kisilewski] earlier this morning in response to all the negative threads by people that have absolutely no idea what they are looking at.”

And Kirsten Swan, a rider who’s made just 10 starts this year, two at Delaware Park, added, “Thank the lord!! We need him in the gate he’s our main man.”