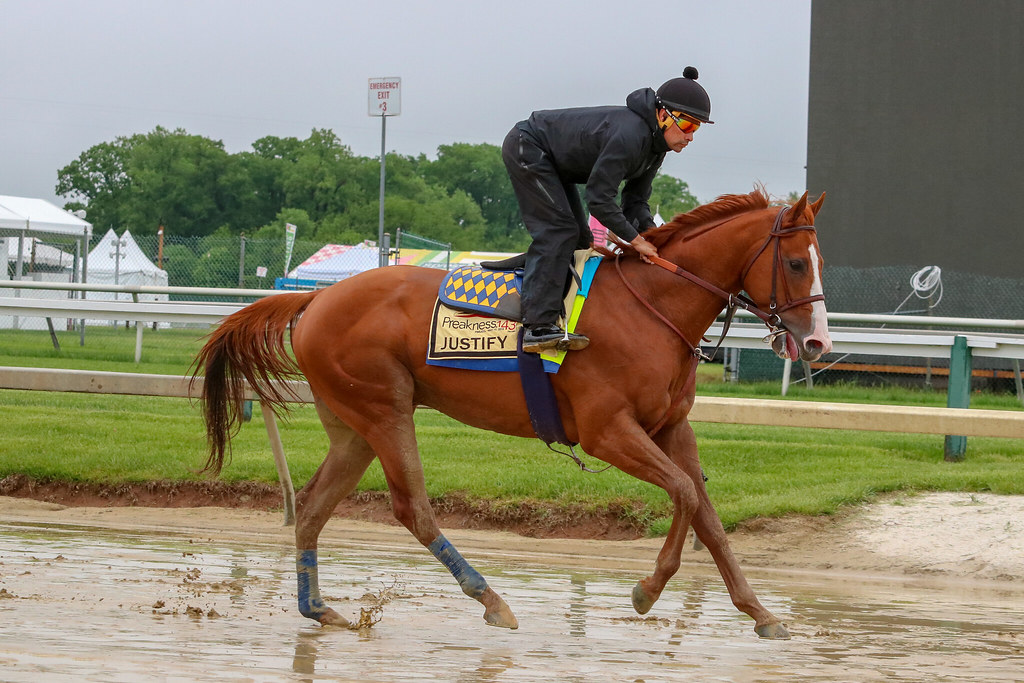 With Hall of Fame trainer Bob Baffert and Hall of Fame jockey Mike Smith looking on, along with a large media contingent, the Grade 1 Kentucky Derby and Grade 1 Preakness Stakes winner took to the track looking full of energy.

“He just floated over this track. He was happy. He was aggressive,” said Baffert, who is seeking to become only the second trainer to win two Triple Crowns. “He went about 1 3/8 miles and jogged back the wrong way [opposite direction].

“He was just getting over the track really well. He couldn’t have looked any better coming around there. He looks like a horse that is flourishing.”

Justify, owned in partnership by China Horse Club, WinStar Farm, Head of Plains Partners and Starlight Racing, arrived at Belmont Park on Wednesday afternoon in advance of his attempt to become racing’s 13th Triple Crown winner and has settled into the same barn as the Baffert-trained American Pharoah when he ended a 37-year Triple Crown drought in 2015.

“He went around there like he’s been here before,” added Baffert. “He’s a very intelligent horse.”

Justify takes on nine rivals in the 1 ½-mile Belmont, and was made the morning-line 4-5 favorite after drawing the No. 1 post.

During the gallop under cool and cloudy skies with exercise rider Humberto Gomez aboard, Baffert said another horse unexpectedly came up to Justify.

“A horse came up to him, and we usually have [his] ear plugs in, but we didn’t do it today because I thought it would be really quiet today, but we’ll put them back in tomorrow,” said Baffert, pointing out that Justify does not race with earplugs, and only has them in during training.

“He was a little fresh,” said Baffert, who also won the Belmont Stakes with Point Given in 2001. “He worked Monday, walked Tuesday and shipped yesterday. He looked great at the barn. I couldn’t be happier.”

Baffert said Justify would go through the same routine on Friday, and would not school in the paddock or the gate before the race.

“He’ll probably get schooled in the one hole sitting in there a long time,” said Baffert.

Justify is looking at his sixth race in less than four months, something that might take a toll on other horses.

“Six races is a lot, but we’ve seen that he thrives on it,” said Baffert. “The way he’s built, his muscles, you could see he’s just a big, strong, powerful, horse. He’s just a muscled-up strong athlete.

“I just want to see him run his race. If he runs his race, he’s just a superior animal. I want him to show up, that’s all. I’m focusing on if he shows up, if he’s good enough, he’ll get it done.”

Smith, the 52-year-old rider getting his first opportunity to go for a Triple Crown, was impressed with Justify’s gallop.

“He looked very nice going over the ground, looks really good,” said Smith. “He should like the track.”