Preakness Past: Deputed Testamony and one for the home team

Our 2018 Ghosts of Preakness Past will feature stories of eight editions of the Preakness from the last 40 years. Today, 1983 and Deputed Testamony, the most recent Maryland-bred Preakness winner.

Not since Bee Bee Bee in 1972, had a Maryland-bred horse dashed over the wire first in the middle jewel of the Triple Crown. But in 1983, that all changed when Harford County native Deputed Testamony stepped onto the sloppy track of Pimlico, and, with local kid Donnie Miller in the irons, blew up the toteboard.

He was, in short, a Maryland-bred, Maryland-owned, Maryland-trained, and Maryland-ridden winner of Maryland’s richest and most prestigious race.

A son of Traffic Cop out of the Prove It mare Proof Requested, Deputed Testamony was bred by the Boniface family’s Bonita Farm and trained by J. William “Billy” Boniface, whose father Bill was racing editor for The Baltimore Sun.

On Preakness day, the betting public dramatically favored Sunny’s Halo, who had won the roses two weeks before, to take the second leg of the Triple Crown, driving him down to 1.10-1.

The odds were stacked against the Maryland-bred, who had yet to score in a major graded stakes. However, nobody told Deputed Testamony that he wasn’t supposed to win, and in defiant style, he prevailed.

The starting gates exploded open to the roar of the crowd, and the field set sail across the sloppy track. Desert Wine rolled up to set the pace, with Deputed Testamony settling in snugly along the rail while in mid-pack. Mud and water sprayed wildly in all directions as the horses shot over the earth. Desert Wine’s position on top was left unthreatened for much of the race, but when the field reached the final bend, the other contenders began to make their bids.

However, it quickly became apparent that the testing surface of the track was, for some runners, too much to overcome, and many of the horses, including the Derby winner, were left toiling. It looked as if Desert Wine would sneak away with the win on the front end, but then from the rail came the big, brown figure of Deputed Testamony.

Miller’s experience at Old Hilltop, he explained years later, told him where to position his horse, especially on a wet track: “The rail was like gold,” he said. Miller’s inside knowledge of the track allowed him to skillfully guide his mount through a flawless ride that would end up winning them the race.

Closing ferociously, Deputed Testamony swung into the stretch soaked in mud and looking for a fight. Deputed Testamony soon found himself on even terms with the pacesetter, and unleashed a devastating closing kick that was enough to finish him off. Deputed Testamony blasted past Desert Wine and pulled away to win by 2 ¾ lengths, giving Miller his first Preakness win at the tender age of 19. 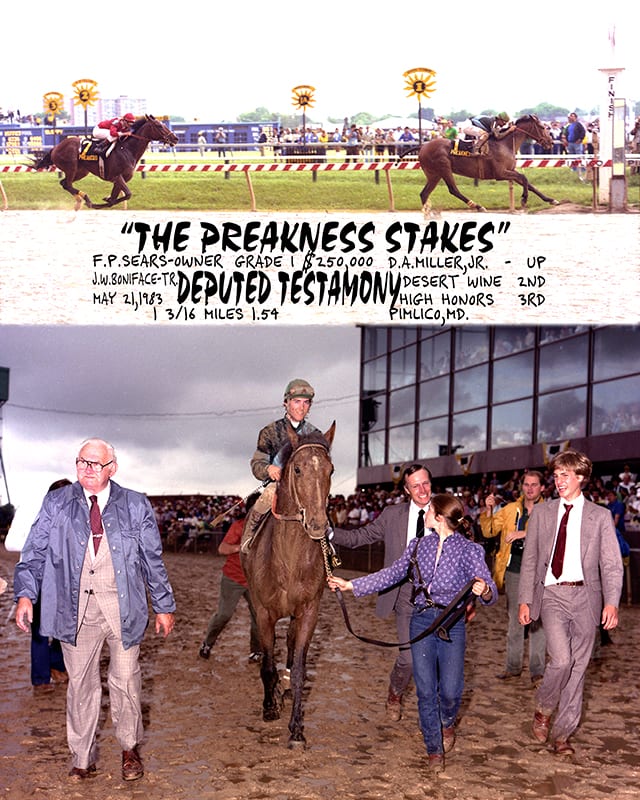 Miller rode in the Preakness Stakes three more times after his stunning upset aboard Deputed Testamony, but failed to duplicate his debut success. That’s not to say that the experience wasn’t meanginful, however.

After the Preakness, Deputed Testamony went on to have a fulfilling career, being honored as the Maryland-bred Champion 3-year-old Male in 1983, and retiring with 11 victories out of 20 starts, which earned him a total of $674,329. To this day, he holds the Pimlico record for 1 1/16 miles, winning the 1984 City of Baltimore Handicap in a blazing 1:40 4/5 for the distance. And he was named to the Maryland Thoroughbred Hall of Fame in 2017.

He retired to stud at his birthplace of Bonita Farm, in Darlington, Md. In his stud career, Deputed Testamony continued to find success, going on to sire 20 crops, whose collective earnings came to an impressive $18.5 million. He also sired the winners of 11 Maryland Million races, fourth in history.

Deputed Testamony passed away at Bonita Farm in 2012, at the ripe old age of 32. While Deputed Testamony was successful both on and off the track, he will always be remembered best for his shocking score in the Preakness Stakes, when he went against the odds to claim victory in the greatest race of his home state.

Even decades after his Preakness score, it is still clear that the local hero left an everlasting mark on those who were involved with him during his journey on earth. In an interview with The Baltimore Sun, Deputed Testimony’s trainer, William Boniface, affectionately declared that, “A more courageous horse never looked through a bridle.”

When you look back at the colt’s career, it’s hard to disagree.