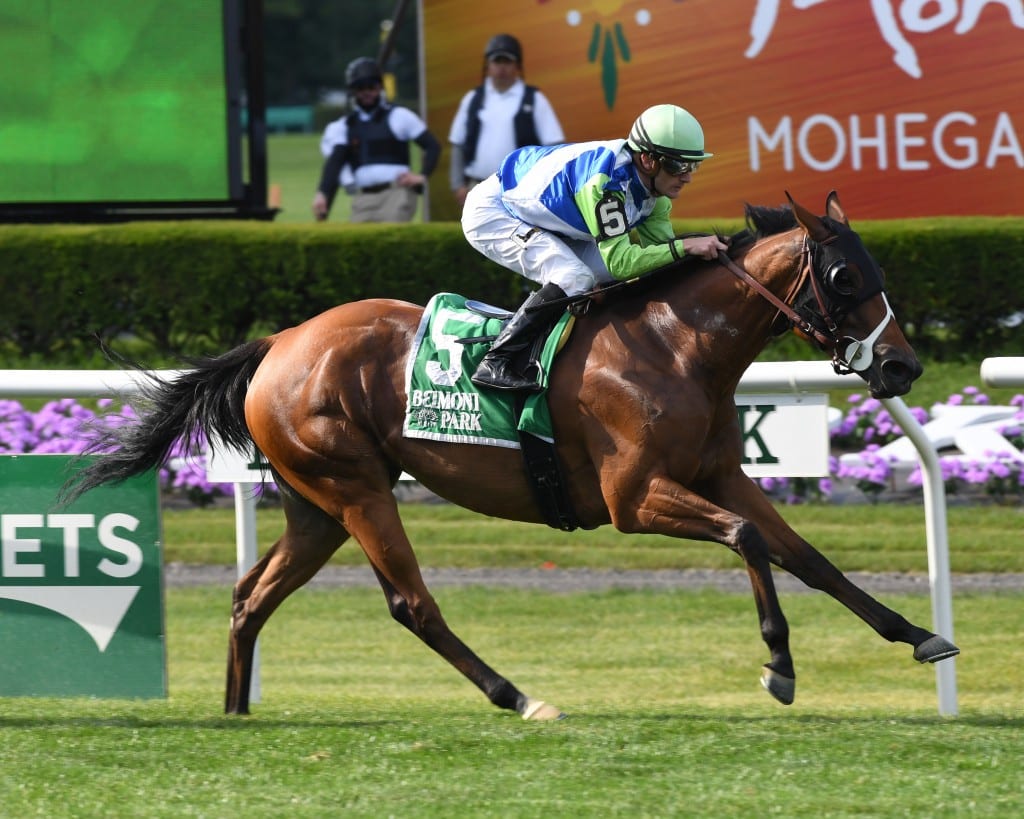 Lael Stables’ Hawksmoor, a German Group 2 winner who developed into a multiple graded-stakes winner in the U.S. last spring and summer, will open her 5-year-old campaign in Saturday’s $100,000 Dahlia at Laurel Park.

The 16th running of the one-mile Dahlia for fillies and mares over the All Along Turf Course is among five stakes worth $550,000 in purses on an 11-race Spring Stakes Spectacular program. Also on the grass is the $100,000 Henry S. Clark for 3-year-olds and up at one mile on the Dahlia Turf Course layout.

Also on the program is the $100,000 Primonetta for fillies and mares going six furlongs on the main track. The Primonetta, Clark and Dahlia each received $25,000 purse increases from 2017.

Irish-bred Hawskmoor, trained by Fair Hill, Md.-based Arnaud Delacour, has not raced since finishing second by a length in the one-mile Matriarch (G1) last November at Del Mar. It was the seventh consecutive graded start, third straight Grade 1 and fourth overall in Grade 1 company, for the Azamour mare, who debuted stateside with a narrow loss while third in the 2016 Queen Elizabeth II Challenge Cup (G1).

“She ran hard in the Matriarch last time out. We gave her a little break and turned her out for four months and brought her back. We wanted to give her a little bit of a break before the season started again,” Delacour said. “We were looking for a good spot to bring her back and get her season started, and I’ve been happy with her.”

Delacour has had Hawskmoor since her second U.S. start when she was sixth in the 2016 Mrs. Revere (G2). Together they won the 1 1/16-mile Beaugay (G3) and 1 ¼-mile New York (G2) in successive starts, both at Belmont Park, and were second in the Matriarch and First Lady (G1), beaten 2 ½ lengths combined.

“She runs well fresh. If you look at her form usually she does well. When she came back last year she won the Beaugay off the layoff, so I expect her to put in a good performance,” Delacour said. “She’s been great. She’s been very consistent. We had a few issues with her last year where she got sick, so we had to wait and she missed some time. That’s why she only ran five times last year. She could have run a few more times but all the time she showed up. She’s definitely a quality filly.”

Regular rider Julien Leparoux will be in town for the mount from Post 4 of 10. All horses will carry 118 pounds.

Glen Hill Farm homebred Compelled broke her maiden at Laurel in October 2016, her only previous try over the local turf, and captured the Juvenile Filly Turf Stakes at Gulfstream Park West in her subsequent start. Second in the Sweetest Chant (G3) and third in the Florida Oaks (G3) to open her sophomore season, the 4-year-old War Front filly went unraced from her runner-up finish in the Hilltop at Pimlico until winning the Mardi Gras Stakes Feb. 13 at Fair Grounds.

Three Diamonds Farm’s I’m Betty G won the 1 1/16-mile Pearl Necklace over fellow Maryland-bred fillies last July at Laurel and set the pace in the 1 1/8-mile Commonwealth Oaks (G3) until being passed late and finishing third by 1 ¼ lengths. She has since run third in four stakes including the Valley View (G3) last fall and Tropical Park Oaks, South Beach and Albert M. Stall Memorial to open 2018.

Pin Oak Stud homebred Full of Zip returns to the turf for the first time since last February in the Dahlia. The Graham Motion trainee faced over the synthetic surface at Presque Isle Downs in the spring and summer and has raced on dirt in her last three starts, two of them off-the-turf efforts at Laurel last fall where she had one win and one second.

Last time out, the 4-year-old City Zip filly made her stakes debut in the Wayward Lass Stakes Jan. 20 at Tampa Bay Downs, finding herself on the inside between horses and was never in contention finishing seventh.

“She won a race at Laurel last fall fairly impressively and then we took her down to Tampa and ran her in a dirt stake down there and then didn’t get an opportunity to run her again. We’ve kind of had this race in mind for her,” Motion said. “I think ultimately turf is her best surface but the City Zips will run on anything really. I think she can lay close. I don’t think she’s a horse that has to come from too far off of it and she’ll be pretty sharp this weekend. I don’t think she’ll be too far off the pace.”

Trainer Lacey Gaudet has a Dahlia contender in Roddy Harrison’s Aura Rose, a horse claimed for $40,000 out of a runner-up finish Feb. 11 on the Santa Anita turf. The Uncle Mo filly was last seen finishing seventh in the Camilla Urso Stakes March 17 over the synthetic at Golden Gate.

Aura Rose has breezed twice since joining Gaudet’s Laurel string earlier this month, including a five-furlong move in 1:01.60 that ranked second among 16 horses at the distance April 15.

“I just got her in a few weeks ago from California and they kind of ran her out of her element. She didn’t belong on the synthetic going three-quarters,” Gaudet said. “We’re really just kind of trying to see what kind of filly we have. [She] should love going a mile on the grass, and there’s really not another spot. [She’s] a really nice filly. [She was] claimed as a broodmare prospects so they want some black type on [her]. I think it’ll be a good spot to try it.”