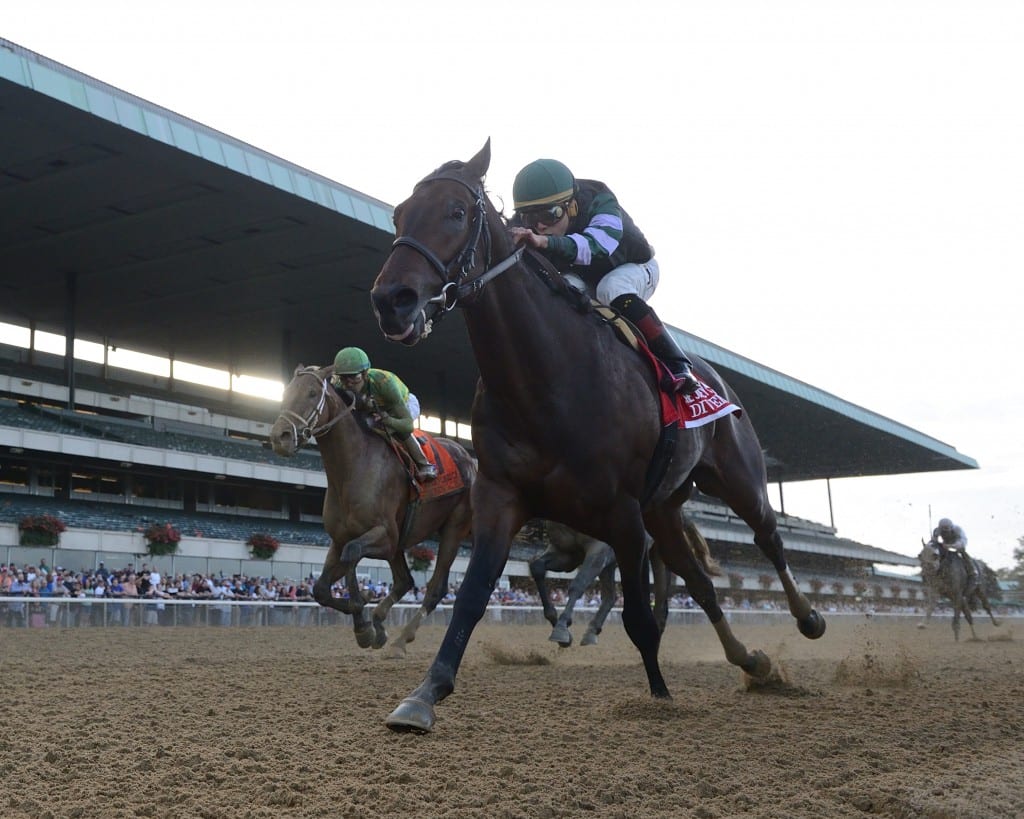 In the weeks leading up to his 2018 debut, Diversify was being pointed for the two richest races on the planet while denting the work tab at the Palm Meadows Training Center under the watchful eye of veteran conditioner Richard Violette, Jr.

In the end, though, he bypassed them and instead will make his five-year-old debut as the likely solid favorite in this Saturday’s Grade 2, $1.2 million Charles Town Classic.

A gelded son of Bellamy Road out of the Street Cry mare Rule One, Diversify is trained by Violette for owners Lauren and Ralph Evans and was bred by Fred W. Hertrich, III and John D. Fielding,

Diversify was initially being pointed for the Grade 1, $16 million Pegasus Invitational at Gulfstream Park in late January and then the Group 1, $10 million Dubai World Cup at Meydan Race Course. But Violette believed Diversify was not quite set for either. Instead, the hero of last year’s Grade I, $750,000 Jockey Club Gold Cup would make his seasonal debut this Saturday at Charles Town in the nine-furlong Classic around three turns.

“Originally, I was hoping to have him ready for the Pegasus,” Violette said in a phone interview on Wednesday afternoon. “But he wasn’t ready for that so then I started looking at the Dubai World Cup, but even last month I didn’t think I had him quite fit enough to go a mile and a quarter. I have never run a horse at Charles Town, but he’s been training great and it looked like a great spot for him to make his first start back. He’s shown that he runs well fresh and I’m hoping that this is the beginning of a really good season for him.”

Violette noted that Diversify left Florida via plane last week and arrived at Newark Airport in New Jersey and then shipped south to the Fair Hill Training Center in Elkton, Maryland. Diversify’s last workout, the ninth he has recorded in the last 60 days, was a four-furlong move in 47 4/5 seconds at Palm Meadows. That was the fastest work of 48 at the distance.

“He’s really been training great,” said Violette. “His last couple of works have really been good. He could not be doing any better.”

As well as his trainee has been doing, however, Violette won’t be in Jefferson County on Saturday.

“I’m a little upset that I won’t be able to attend the race on Saturday, but it falls on the same weekend as the Ocala sale and for me it’s like the draft,” he said. The Ocala two-year-old sale is next week, with the under tack show taking place this week. “I want to be there to see if I get another handful of talented younger horses and maybe grab the next Diversify.”

Unraced at age two, Diversify made an immediate impression on Violette by winning his career debut against maiden special weight foes at Belmont Park on July 14, 2016 then winning three consecutive allowance races. After finishing second twice and seventh once in his next three starts, Diversify attained his first stakes score when he captured the $100,000 Saginaw Stakes for New York-breds at Belmont on July 2, 2017 by three lengths. He then took the $100,000 Evan Shipman for state-breds on Aug. 21 at Saratoga by nearly a dozen lengths.

With consecutive stakes victories against New York-breds under his belt, Diversify headed into the Grade I Jockey Club Gold Cup somewhat as an unproven commodity against a talented group that included Keen Ice, the one-time conqueror of American Pharoah and a fixture in Grade I events at three and four. Sent off as the nearly 4-1 second choice in the field of seven, Diversify gained command soon after the break and led throughout to capture the prestigious Jockey Club Gold Cup in 2:00.96 for the one-mile and one-quarter distance.

“That was a tremendous feeling to see him win that race,” Violette said. “It wasn’t my first Grade I, but for a New York trainer to have a New York-bred win the Jockey Club Gold Cup was just a great feeling.”

Diversify concluded his four-year-old season by running fourth as the 7-5 choice in the Grade I, $500,000 Clark Handicap at Churchill Downs and finished the year with four wins and nearly $700,000 banked from eight starts. In his career, he has won seven of 11 starts and is only $575 shy of reaching the $800,000 plateau in career earnings heading into the Charles Town Classic. Jockey Irad Ortiz, Jr., who has been aboard the New York-bred in each of his last four starts, boasting three stakes wins, will get the mount again on Saturday.

“A lot is up to him now,” Violette said. “If he reproduces the form from the end of his four-year-old year, it’ll be a lot of fun. You know you have to cross young fingers when you bring a horse back from a break, but he’s been training great and he’s always run well fresh. He’s been very consistent for us and I’m hoping he runs well and gets the year off to a good start. I wish I could be there but I know his owners will be there and my assistant, Melissa Cohen, will be there with him and give Irad a leg up and then it’s up to him to run his race.”