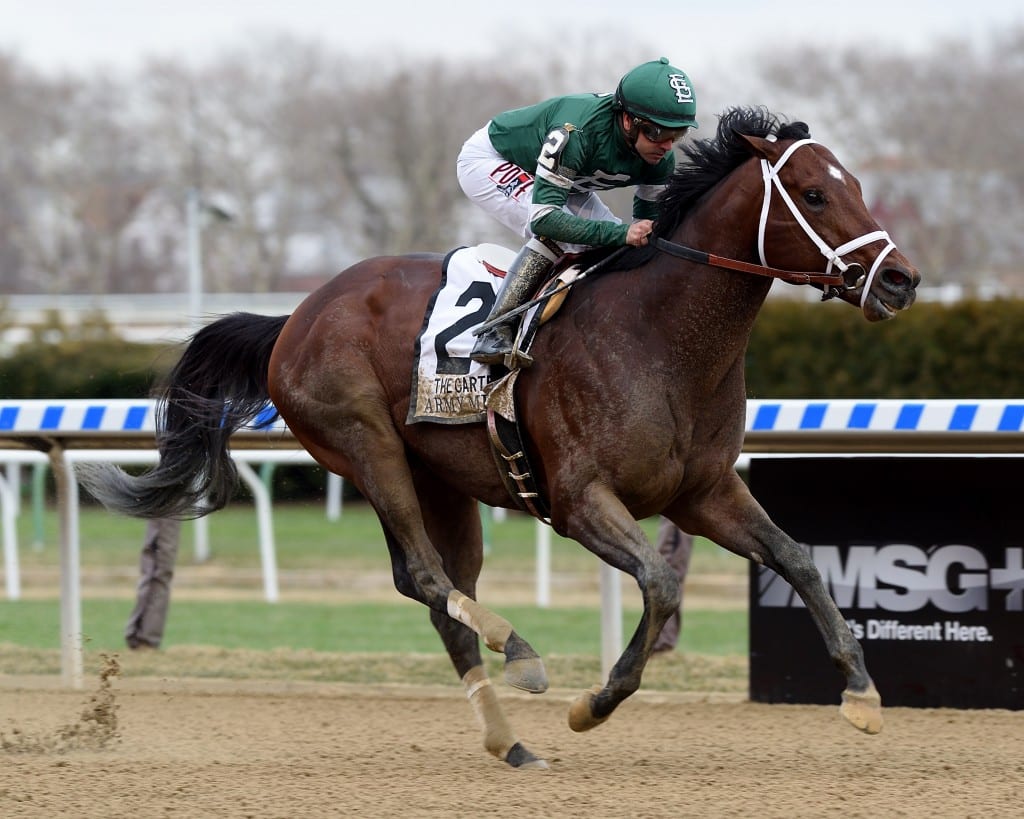 Army Mule was much the best in the Carter at Aqueduct. Photo by NYRA.

Army Mule found an opening on the far turn and ran away to a 6 ¼-length victory in the 118th running of the Grade 1, $400,000 Carter Handicap for 4-year-olds and up on Saturday at Aqueduct Racetrack.

Making his stakes debut off a pair of open-length victories, the Pennsylvania-bred Army Mule rated two lengths off the pace in third through a half-mile in 44.93 seconds. Pacesetter Red Dragon Tattoo drifted outward nearing the quarter-pole, and Army Mule shot through the opening and drove clear under jockey Joe Bravo.

“He was so relaxed and quiet behind horses,” said Bravo. “I was kind of looking to try to get outside because it seemed like the other races were going down the middle of the track. Everybody starting coming outside and they took up those positions and in two jumps, he was able to jump through that hole and go by there, because that’s what good horses do.”

Trained by Todd Pletcher for Vincent Viola of St. Elias Stable, Army Mule debuted an 8 ½-length winner last April at Belmont Park before being sidelined for nine months. He returned in an optional claimer January 31 at Gulfstream Park, overcoming a slow start to score by 7 ½ lengths. The Carter was his first start beyond 6 ½ furlongs.

“You don’t expect to win a Grade 1 by that many lengths, and I didn’t even think the track is that fast today,” said Pletcher, now a three-time winner of the Carter. “He’s something really special. We felt good coming into the race. My biggest concern was that it was only his third race and he was giving up a lot of seasoning to some other horses, but he showed us he deserved a chance, and I’m glad it worked out.”

“The sky’s the limit with him,” said Pletcher. “He’s just a super talented horse and it’s a matter of keeping him happy and healthy and pointing him in the right direction. The way he finished today at seven-eighths, a race like the Met Mile would certainly make sense and be on the radar.”