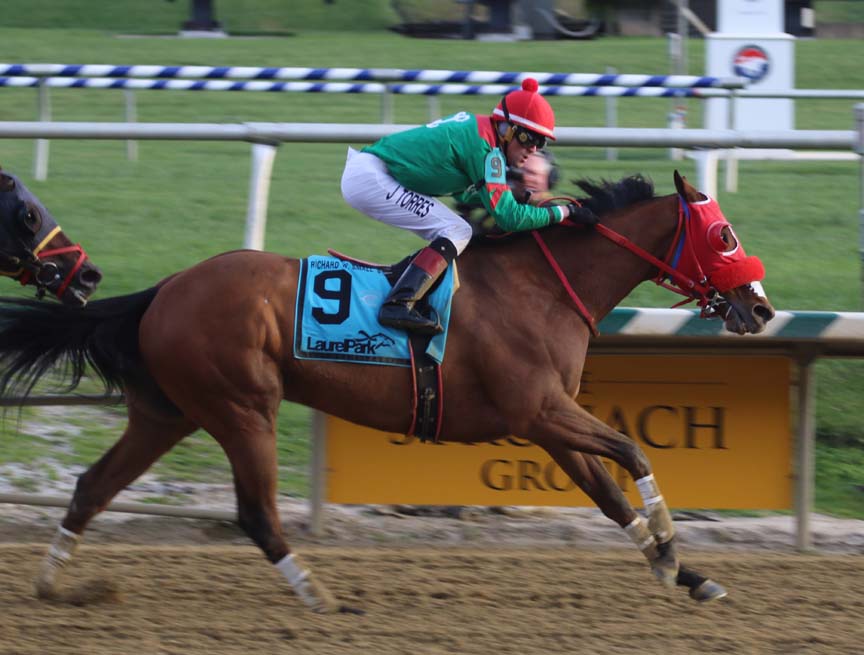 BB Horses’ Afleet Willy is entered to seek his fourth stakes victory in five starts in Saturday’s $100,000 John B. Campbell at Laurel Park. Meanwhile, in the Maryland Racing Media Stakes, Sherini, kid sister of Preakness hero Shackleford, will look to go out with her first stakes win.

Trained by Claudio Gonzalez, Afleet Willy, a 5-year-old gelding, is scheduled to clash with five rivals in the 1 1/8-mile race for older horses on an 11-race program featuring six stakes, including the $300,000 Barbara Fritchie (G2) and the $250,000 General George (G3).

Afleet Willy has captured the Governor’s Day Handicap at Delaware Park, the Richard Small and the Native Dancer at Laurel Park while successfully negotiating two turns. The son of Wilburn’s only loss since September came in the one-turn Dave’s Friend, a six-furlong sprint in which his chances were virtually dashed by being squeezed back at the start and forced to race extremely wide before fading to eighth.

Stretching back to two runs for the 1 1/16-mile Native Dancer, Afleet Willy went right to the lead and was never threatened before drawing clear by five lengths at the finish.

Afleet Willy, who has finished in the money in 20 of 26 career races, was claimed for $25,000 out of a victory in a maiden race Dec. 27, 2015. The Kentucky-bred gelding has gone on to win 10 races, including three stakes, for Gonzalez and BB Horses.

“Every race he gets better and better,” Gonzalez said. “I believe he has a big chance to win the race Saturday.”

Rated at even-money in the morning-line, Afleet Willy looms as a threat to set an uncontested early pace, but Gonzalez said his Kentucky-bred gelding is hardly a one-dimensional speed horse.

“If he gets position outside of horses, he can do anything he wants. He doesn’t need the front,” Gonzalez said. “Sometimes when he had an inside post, we’ve had to send him.”

Jomar Torres, who has been aboard for Afleet Willy’s three stakes wins, has the return mount in the Campbell.

“It’s a nice race. It’s not going to be easy. There are a couple of really nice horses,” Gonzalez said. “He’s ready.”

Ten Strike Racing’s Zanotti enters the Campbell (presented by Ourisman of Clarksville) off a victory in the Dec. 23 Queens County Stakes at Aqueduct at the 1 1/8-mile distance. The Juan Carlos Guerrero-trained 5-year-old gelding hasn’t finished worse than second in eight starts since being claimed for $30,000 at Churchill Downs in November 2016. Regular rider Jorge Vargas Jr. has the mount.

Ivery Sisters Racing’s Turco Bravo, a 9-year-old multiple stakes-winning gelding, is slated to seek his first victory since 13 starts since capturing the Birdstone Stakes at Saratoga in August 2016. Currently trained by David Cannizzo at Belmont Park, the Chilean import finished third, beaten by a half-length, in the Jan. 20 Jazil Stakes at Aqueduct. Joe Rocco Jr. has the return mount.

My Meadowview Farm’s Sherini will be on a quest to go out a stakes winner in Saturday’s $100,000 Maryland Racing Media at Laurel Park.

Being the half-sister to 2011 Preakness winner Shackleford, the 5-year-old daughter of Bernardini already has considerable value, but a victory in the 1 1/16-mile Maryland Racing Media would only make her an even more attractive broodmare prospect.

“This might be her last start before she goes to the breeding shed. She’s a beautiful mare, hopefully we can get her some black type,” trainer Graham Motion said. “She’s actually really grown up this year. I’d love to keep her in training but I think they’ve already got her booked to a stallion.”

Sherini was an impressive winner in her Laurel Park debut Dec. 2, returning from a 14-month layoff to capture a 1 1/16 mile allowance by 1 ¼ lengths Dec. 2. The Kentucky-bred mare ran creditably in her stakes debut in the 1 1/8-mile Ladies Handicap Jan. 21 at Aqueduct, finishing third, a length behind victorious Just Got Out, before being disqualified and placed fifth for drifting in through the late stretch.

“I thought it was a little bit of a tough call. I’m not sure she should have been taken down,” Motion said. “She wasn’t beaten very far. She just had a tough trip. She was kind of buried down on the rail at Aqueduct, which I don’t think was really the place to be that day.”

Feargal Lynch, who rode her to victory in the Laurel allowance, is slated to return to the saddle.

Sherini is scheduled to clash again with Just Got Out, who has won her last two races for owners Linda Rice and Sacandaga Stable, who claimed the 7-year-old daughter of Harlington for $20,000 in July. Manuel Franco has the return mount.

Michael Dub and Bethlehem Stables’ Bishop’s Pond has been rated as the 5-2 morning-line favorite in a field of 10 older fillies and mares on the strength of a convincing 5 ½-length triumph in the Jan. 8 Thirty Eight Go Go Stakes at Laurel Park.

The Jason Servis-trained 6-year-old mare is scheduled to be ridden back by Rosario Montanez.

R. Larry Johnson and R D M Racing Stable’s In the Navy Now, and Sheffield Stable’s Line of Best Fit, who were a neck apart while finishing first and second, respectively, in the Jan. 27 Nellie Morse Stakes at Laurel, are set to return in the Maryland Racing Media.

Frisky Whiskey, Sky Flower, Not Taken, Felini and Miss Inclusive round out the field.