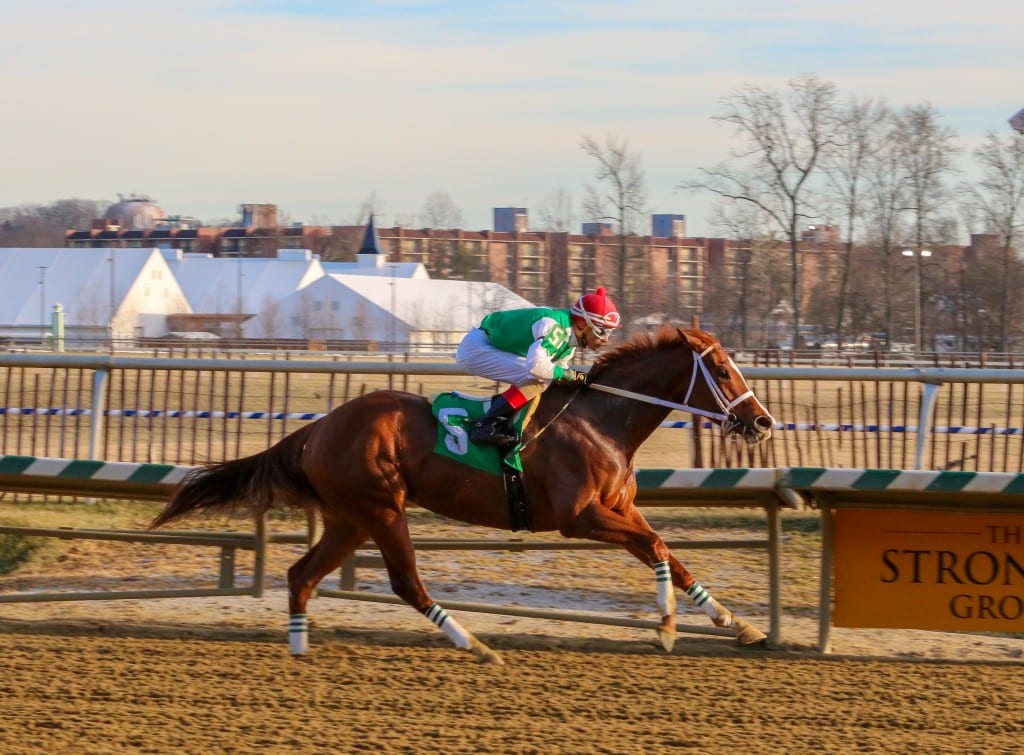 Ms Locust Point was easily best in the What A Summer Stakes at Laurel Park. Photo by Dottie Miller.

Cash is King and Jim Reichenberg’s Ms Locust Point, already a stakes winner in each of her three local starts, puts that streak on the line as she goes after her first graded triumph in Saturday’s $300,000 Barbara Fritchie (G2) at Laurel Park.

The 66th running of the Barbara Fritchie for fillies and mares 3 and older and the 42nd renewal of the $250,000 General George (G3) for 3-year-olds and up, both at seven furlongs, highlight a 11-race Winter Carnival program featuring six stakes worth $950,000 in purses.

Ms Locust Point has won three consecutive races since returning in November following a layoff out of her lone previous try in graded company in last February’s Forward Gal (G2) at Gulfstream Park. Her last two have come in the six-furlong Willa On the Move and What a Summer at Laurel, where she also captured the Gin Talking in December 2016.

Both of her recent stakes victories came in front-running fashion, kicking off her 4-year-old season Jan.20 with a three-length triumph in the What a Summer despite bobbling at the start to win in a sharp 1:09.78.

“She came out of her last race very good and she’s doing great. She’s going into this race good. We missed a couple days of training because of the track but, all in all, she’s sitting on go,” Parx-based trainer John Servis said. “Her last defeat she came out of the race with an issue and we had to give her a little time and she’s come back great.

“She’s maturing and learning how to settle a little more. She’s becoming a better racehorse,” he added. “She looks like a colt, and she’s got a pretty fast cruising speed. She can cruise along pretty good and just do that in hand comfortably.”

Favored in each of her seven career starts, Ms Locust Point lost her debut at Parx in October 2016 before graduating next out and capping her juvenile campaign in the seven-furlong Gin Talking. She tried the distance again last winter, opening up a clear lead before fading to fifth, beaten 3 ¼ lengths.

“When we first got her, about the third time we breezed her she did it so nice and well in hand. She was a little rambunctious then, so we kind of thought if we could teach her to settle and bottle up some of that speed we’d be a lot better off in the long run,” Servis said. “This would be a great race to win; obviously, it’s a graded stake. We’re just taking baby steps with her and trying to manage her the right way and find the right spots where she can continue to earn money and be successful.”

Regular rider Jorge Vargas Jr., who leads Laurel’s current winter-spring meet with 19 wins from 78 starters, will be up again from Post 9 at 118 pounds.

The most accomplished horse in the 11-horse field is Chester and Mary Broman’s millionaire homebred Highway Star, a four-time graded-stakes winner and 124-pound topweight who came up a head shy in the seven-furlong Ballerina (G2) last summer at Saratoga.

Trained in New York by Rodrigo Ubillo, the 5-year-old mare won the Gallant Bloom (G2), Ruffian (G2) and Distaff Handicap (G3) last year at distances from 6 ½ furlongs to one mile and also finished third in the 1 1/16-mile Ogden Phipps (G3) and second in the one-mile Go For Wand (G3) Dec. 2 at Aqueduct, her most recent start.

“In between seven furlongs and a mile, she handles those two distances very well. She likes the one turn. I don’t know if she knows the difference with an extra furlong. She doesn’t care, but that’s what she does best,” Ubillo said. “She just does everything right and she’s competitive. She always gives her best out there and she tries every time.”

Three C Stables, West Point Thoroughbreds and Robert Masiello’s Berned will make her 4-year-old debut in the Barbara Fritchie, having rallied from last of 11 to upset the seven-furlong Safely Kept by 4 ¼ lengths at odds of 8-1 Nov. 11, her most recent effort.

Berned has run in five previous graded stakes, finishing second in the 2016 Tempted (G3) by less than a length, and fourth in the 2017 Coaching Club American Oaks (G1) and Charles Town Oaks (G3), the latter by 1 ¼ lengths.

Jockey Feargal Lynch, aboard for the second straight time in the Safely Kept, retains the mount from Post 6 at 118 pounds.

“When she won the Safely Kept, this was sort of the plan to point for the race at Laurel. She obviously likes the track a lot and Feargal’s got an awful lot of confidence in her and I think running on that track allows him to kind of let them run away from her early and then come with a run,” trainer Graham Motion said. “I always had her pegged as more of a mile and a quarter-type horse but the owners always thought she was more of a seven-furlong horse and it looks like they were right.”

Rounding out the field are Bishop’s Pond, winner of the Thirty Eight Go Go Stakes Jan. 8 at Laurel and Frisky Whiskey, both cross-entered in the Maryland Racing Media; Divine Miss Grey and Boule, 1-2 finishers in the Interborough Stakes Jan. 15 at Aqueduct; multiple stakes winner Quezon; stakes winner Moiety; Sky Flower, second in the Thirty Eight Go Go and third in the Nellie Morse Jan. 27 at Laurel; and Tazkeya, second to Ms Locust Point in the What A Summer.