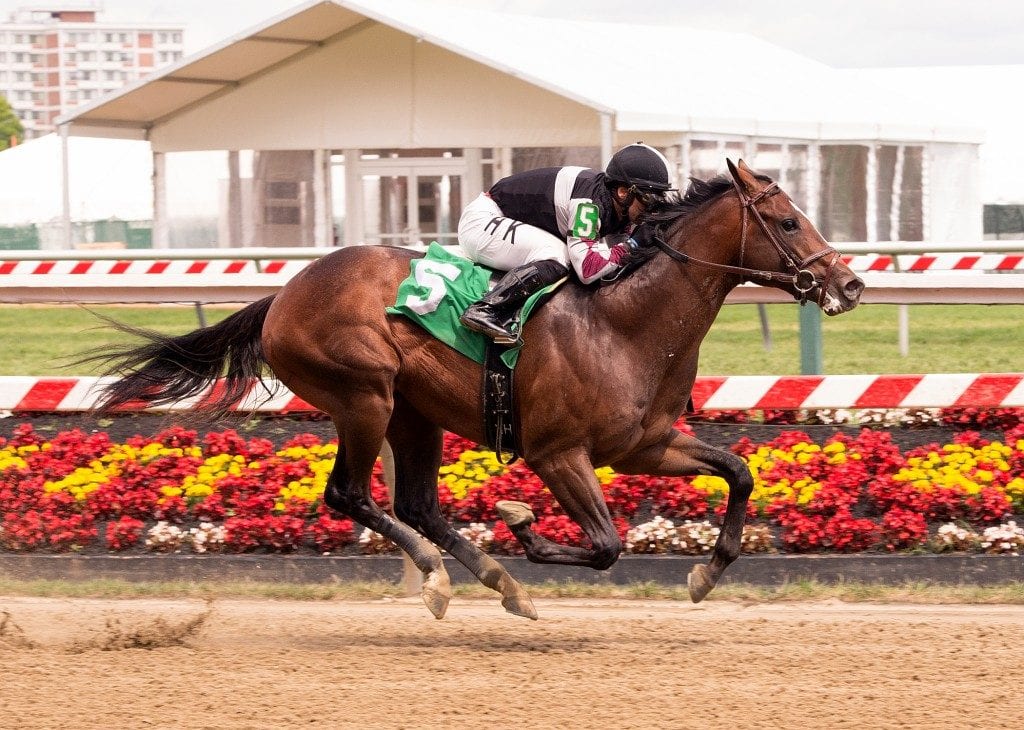 He Hate Me, who broke his maiden at Pimlico in the spring, is expected in the Miracle Wood at Laurel Park in February. Photo by Jim McCue, Maryland Jockey Club.

Horacio DePaz knows he’s in a spot most trainers would kill to be in. As head trainer for Sagamore Farm, he has an energetic, success-driven owner in Kevin Plank (owner of Under Armour) and a top flight management team that includes president Hunter Rankin and consultant Stanley Hough, one of top horsemen in the business and a member of the Calder Race Course Hall of Fame. And he can operate from a beautiful farm and training facility that ranks among the best in the country.

But when your organization’s mantra is, “We’re aiming to win the Triple Crown,” expectations run high. DePaz, 32, knows this and says that working with people who want to be at the top of the game is as exciting as it is challenging.

“I’m sure just about every owner and breeder in the business wants to win the Kentucky Derby and the Triple Crown,” DePaz said. “Fortunately, in my case I’ve got the organization and the commitment of my owner to come up with the horses that have a realistic chance to not only compete but succeed at the highest level. When I was offered the job with Sagamore, I knew this was an opportunity of a lifetime. I knew we would be expected to produce, but with the team we have and with Kevin’s passion for the game, I’ve been given a chance not many young trainers get. I think we’ve got the right plan and the right program. And we’re seeing some results, we’re moving forward.”

The Sagamore philosophy with young horses is to buy and breed with an eye for the long term.

“We know that American racing is heavily influenced by speed, so fast horses are always sought after,” DePaz explained. “And we go to the sales looking for the best horses available, including good speed types. But our overall goal and long range objective is to produce classic-level performers, and those type horses are the ones who can run longer, so we’re always looking for that type of individual who has pedigree as well as potential staying power.”

DePaz said the Sagamore philosophy can be seen in the pedigree of the farm’s broodmares and homebreds.

“We made some adjustments when we started, and while it’s taken just about two years, those adjustments are starting to show,” he explained. “You’ll see more of an emphasis on distance and stamina in the lines of our mares and their offspring. This is all pointed toward producing and racing classic runners.”

Sagamore’s distinctive black-and-gray silks accented with maroon diamonds have been prominent in the winner’s circle of late, as the stable has won four of six starts since the first of the year at Laurel. DePaz said it’s just a case of horses coming to hand, as well as some late developing youngsters starting to put things together.

“We try to be patient and give our horses time to develop,” said DePaz. “They’re like children; some are quick learners, and others take a while to pick up on things, but when they do it’s great to see them getting the idea.”

Global Citizen and Dictate Cool broke their maidens on back-to-back days at Laurel in mid-January. The well-bred Dictate Cool, whose dam, Walkwithapurpose, won five of seven lifetime starts for Sagamore for almost $300,000 in purse earnings, so impressed the connections of trainer Chad Brown that they purchased the filly after the race.

“She’s a nice filly, and I was sorry to see her go, but this is a business and the price was right,” DePaz reported.

One of Sagamore’s older horses, Recruiting Ready, is hoping to build on a productive three-year-old campaign. He was third last year in the Grade 2 Woody Stephens and is a four-time winner for earnings of over $370,000. He ran third in a very tough allowance optional claiming race at Gulfstream Park in his four-year-old debut January 18, and DePaz is looking to run him next in the Pelican Stakes at Tampa Bay Downs.

“That was a very deep group he was in against at Gulfstream,” DePaz said. “I think he’ll come out of that race and run much better next time.”

Sagamore’s top three-year-old, He Hate Me, made his 2018 bow in Tampa Bay’s seven-furlong Pasco Stakes but ran into a monster performance by World of Trouble, finishing a distant though clear second in a race run in 1:21,52, just .12 of a second off the track record. It was He Hate Me’s first defeat in three tries. DePaz said his colt would probably make his next start in the $100,000 Miracle Wood going a mile at Laurel on February 17.

“He ran a solid race at Tampa, and nobody was going to beat the winner that day,” he said. “He came back tired, as we expected he would coming off the layoff, and I think the one-turn mile race with the long stretch at Laurel will tell us a lot about his staying power.”

And staying power is something that DePaz, and Sagamore, value.