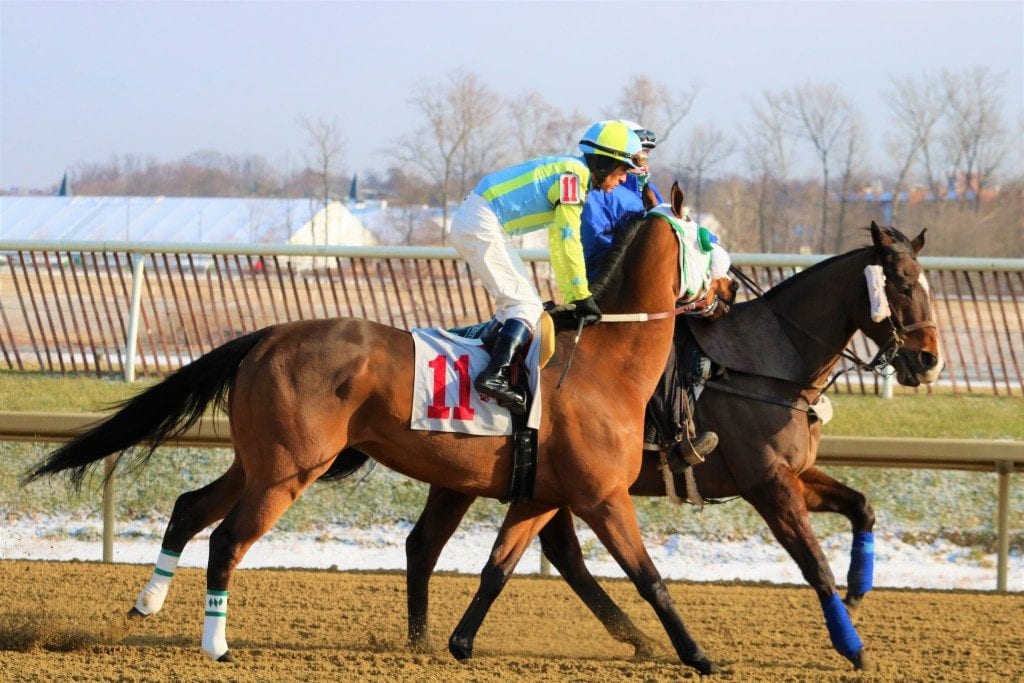 John Jones prior to winning the Jennings Stakes at Laurel Park. Photo by Dottie Miller.

Matt Schera’s John Jones, back his multiple stakes-winning form to end an abbreviated 2017 campaign, will attempt to carry that momentum into the new year in Saturday’s $100,000 Native Dancer at Laurel Park.

A 6-year-old Smarty Jones gelding, John Jones raced only four times last year after recovering from a minor injury following a 2016 season where he won six of 13 races – five of those wins including a pair of stakes coming after being claimed for $25,000 by trainer Lacey Gaudet.

No better than fourth in his first three starts at 5, John Jones rebounded by defending his title with a 2 ¼-length triumph as the favorite in the one-mile Jennings against fellow Maryland-breds Dec. 30.

“It was huge. It was great for everything – for his morale and for ours. You kind of start scratching your head when you come back off the long layoff, and there were a few reasons to contribute to why he hadn’t gotten back into form,” Gaudet said. “We had aimed for all of those races along the road but that was the ultimate goal, to get back to that race. Everything going into it finally was 100 percent.

“We never missed a beat going into that one, and right now it kind of looks like the same thing going into this race. He’s been doing great,” she added. “He’s had some really, really nice works under his belt, we had a great racetrack to be able to do so, and they’ve been pretty fast for him. I can’t complain about anything.”

John Jones is second on the morning line at 8-5 in the Native Dancer, which will be the first stakes for Gaudet since the passing of her father, well-respected horseman Eddie Gaudet, Jan. 4 at the age of 87. John Jones drew Post 4 in the field of seven and will have Hall of Famer Edgar Prado in the irons for the second straight race.

“The post is fine. As long he didn’t draw the one or two hole, we were fine with that,” Lacey Gaudet said. “He’s shown before going the two turns that he can be a little more tactical. Going a mile and a sixteenth here you don’t want to be much further out than the six hole. That’ll be the only question is getting him back to going two turns, where he’s won before. I think having that fantastic race under his belt last time out will help him and will help our confidence going into this race.”

BB Horses’ multiple stakes winner Afleet Willy is the 7-5 program favorite for the Native Dancer, From the barn of Claudio Gonzalez, Maryland’s leading trainer of 2017, the 5-year-old gelding had won back-to-back stakes before running eighth as the favorite following a rough trip in the six-furlong Dave’s Friend Jan. 8.

“He didn’t run that day. He got pretty bad position and they bumped him really hard after they break,” Gonzalez said. “He came back good and he’s doing good, so that’s the reason I’m going to run. There’s not too much speed and we’re in a good position to get it done. I think he has a big chance to win the race. For me he is better going long.”

An intriguing long shot is Morgans Ford Farm’s River Deep, a 4-year-old Arch colt who wheels back just eight days after having his four-race win streak snapped when second by less than a length to Final Prospect in a third-level optional claimer Jan. 19. Both Final Prospect and multiple stakes-winner Bodhisattva, third in that race, also return in the Native Dancer.

“He’s just a really nice horse. We felt like he might have been the best horse the last time,” trainer Phil Schoenthal said. “He was on rail and kind of beat the gate out of there and ended up on the lead which is not where we wanted to be and got pressed the whole way. He never got a chance to relax and catch his breath and kind of got dogged the whole way and still dug in and fought and narrowly lost.

“I think in an ideal world we would not be running him back on eight days rest, but with the quarantine situation in New York and looking like it was going to be a fairly short field we decided to go ahead and enter,” he added. “We’ll take a look at the field and see what the pace scenario looks like and if he fits.”