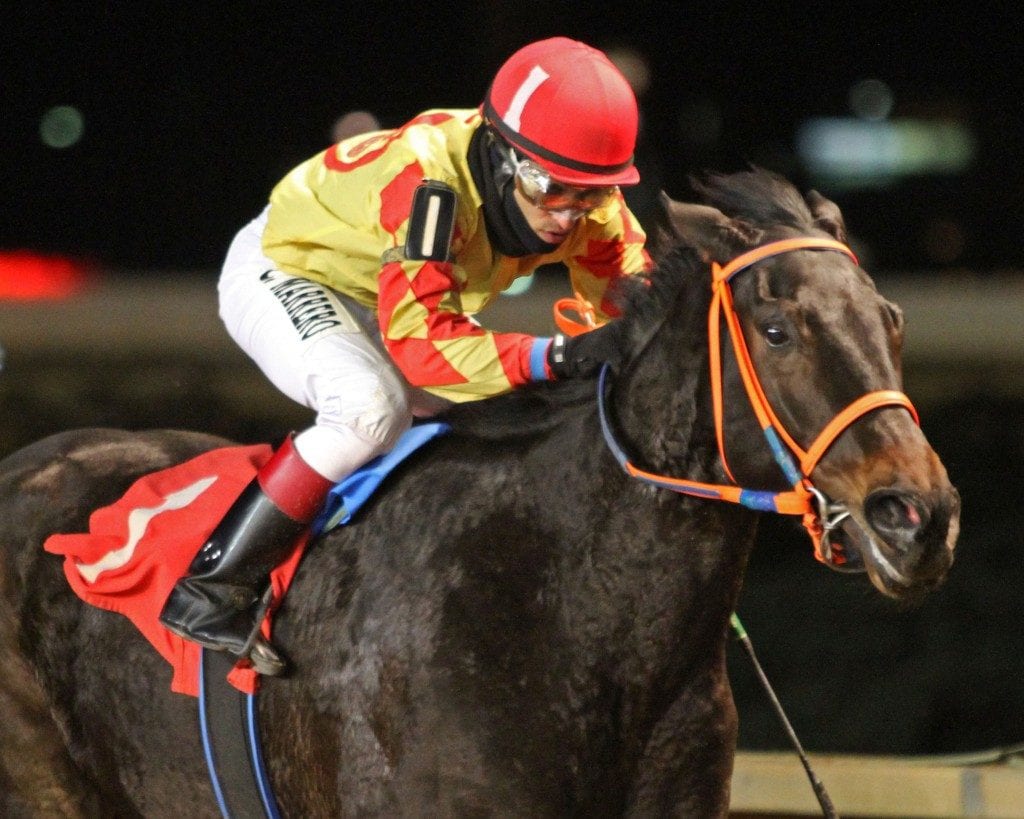 Ihearuknockin won for the second time in as many starts at Charles Town on December 16. Photo by Coady Photography.

Heading into last fall at Charles Town, trainer Gerald Coker, Jr. had never conditioned a horse that won the first two starts of its career, and he had never saddled a stakes winner. But part of that equation changed last fall when Ihearuknockin won at first asking last November and then scored again in his second start a month later.

Now both Coker and owner/breeder Gary Hemp are eager to see if the Windsor Castle gelding can complete the other half of the equation and give Coker his first stakes win.

Ihearuknockin, a newly turned four-year-old son of Windsor Castle out of an unraced Speightstown mare named Jordans Road, never made it to the races as a two-year-old and spent much of his three-year-old season in the barn before finally recording a published workout at Charles Town on August 2, breezing a half-mile in 51.20, good for 14th of 17 that day at that distance. But on Aug. 10 he worked a half in 49.40, which was fourth among 12 and one week later he fired a bullet 48-flat that was best of 20 runners at the distance that morning.

“He was always such a big horse we never really had any plans to run him at two,” said Coker, who has saddled 57 winners from 541 runners in his career with earnings of just over $850,000. “He’s a huge horse, something like 17 hands. We just wanted to take our time with him. But he’s always shown me that he had plenty of ability. His first workout was okay but then he had three or four bullets before his first race.”

In fact, Ihearuknockin recorded three more works before his career debut last fall, two of them bullets, including a sharp three-eighths in 35.40 seconds October 12. Five weeks later in his career debut on Nov. 17. Ihearuknockin was sent off as the 5-2 second choice in a one-turn maiden special weight event for state-bred three-year-olds and upward in which he was the only first-time starter in the field of eight.

When the gates opened in that one-turn maiden special weight dash, Ihearuknockin broke a step slow and trailed the field when they left the chute. But he quickly found his best stride under jockey Carlos Marrero and began passing horses down the backside and through the far turn. He eventually unleashed a stout late kick to prevail by a half-length over even-money choice Gone Global after getting the 4 1/2-furlongs in 53.68. It was a promising conclusion to a debut that did not begin as expected.

“I was a little nervous before the race, and then I was really nervous when I saw him hesitate at the start and get away last,” Coker said. “Maybe it was just being back in that chute or being under the lights, but he wasn’t ready when they broke. But he got into stride right away and he finished up really well. I thought the 4 1/2 (furlongs) might have been a little short for him, so we were looking to stretch him out for his next start anyway.”

After getting the first six furlongs in 1:14.24, the stage seemed set for a match race among the top two choices. But Ihearuknockin had other ideas, and he collared the favorite at the top of the lane and edged past him and went on to a length score in 1:28.71, while Fairweather Friend faded to fourth.

“After his first race, I thought the longer races were going to be better for him,” said owner-breeder Gary Hemp, who purchased Ihearuknockin’s dam for $3500 at Keeneland. “But I leave it up to Gerald to decide where to run the horse. I never try in influence the trainer. He’s in the barn with the horse every day. I just breed them and hope they turn out to be runners. I spend a lot of time studying the pedigrees and the sire lines and seeing which of them is best for the broodmares that I have.”

One of the first broodmares Hemp purchased was a daughter of Corridor Key named Prize Secret, who was the dam of Hemp’s two most productive runners so far, Royal Blue, another son of Windsor Castle who has won seven of 22 starts and banked nearly $130,000 for trainer Mike Butts, and Shiny Blue, who won four of 66 starts and earned over $110,000. In fact, Royal Blue was the last foal out of Prize Secret, 27, whom Hemp gave away last fall to be a riding horse.

Prize Secret hardly distinguished herself on the track, posting a 7-5-5 slate and $36,000 banked from 35 starts, and Hemp purchased her for $800 following her racing career. Prize Secret made just a single start in stakes company – she finished 10th in the 1993 Everget Stakes at Delaware Park – but that lone stake start was notable in a different way. The show horse in that event was none other than the great West Virginia-bred Cavada, who went on to become the first filly to beat the boys in the West Virginia Breeders Classic the lone year it was held at Mountaineer Park and in whose honor the most coveted race for state-bred distaffers is named on WVBC night.

“She did not do much as a runner, but she was bred to be really nice so I thought she would turn out to be a really good broodmare,” said Hemp, whose family owns and operates Hemp’s Meats, a nearly-170-year-old butcher shop and beef farm just outside of Frederick, Maryland. “She had a number of good foals, and Royal Blue was her last one, and he’s turned out to be the best one of them all.”

Neither Coker nor Hemp has won a stakes race, but after Ihearuknockin won his first two starts, both men are optimistic the Windsor Castle gelding could change their fortunes this summer or fall. Coker came close to winning a stake when Kathleen Elizabeth placed in a pair of two-year-old stakes in 2016. Royal Blue has won six allowance races since breaking his maiden but has yet to do better than fifth in three stakes tries.

Coker, 33 and a native of Orangeburg, SC, will saddle Ihearuknockin January 17 at Charles Town. He is 6-1 on the morning line in a wide-open affair in which six of nine entrants have morning line odds between 7-2 and 6-1.

“He’s the first horse to go 2-for-2 for me,” Coker said of Ihearuknockin. “I definitely think he’ll do well in the longer races this year. It would be nice to win one of those stakes with him later this year. That’s a long way off, but I hope he keeps improving.”

“It would be nice to win a stakes with one of my homebreds,” Hemp agreed. “That’s why I spend so much time studying the pedigrees. I’ve had some good luck so far, and I’ve gotten a lot of help from people like Mr. (James W.) Casey and Randy Funkhouser. Mr. Casey has helped me a lot in this business. I bought a couple of mares from him a few years ago to help get started and I’ve added a few more. It would be nice to see Ihearuknockin develop into a stakes horse and win one of those races on West Virginia Breeders Classics night. But you have to have a little luck along the way.”