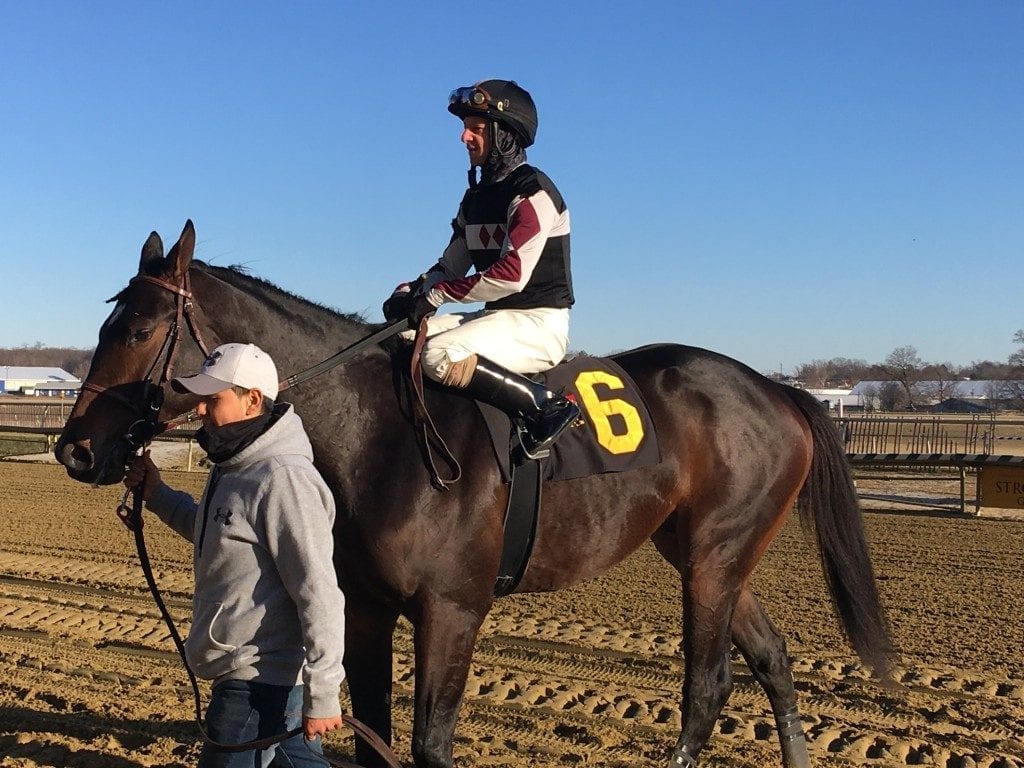 Make it a twofer.

For the second time in two days, jockey Steve Hamilton piloted a Horacio DePaz-trained Sagamore Farm runner to a win at first asking at Laurel Park, the 11th first-out winner in the last two years for DePaz. On January 13, it was Dictate Cool; on the 14th, Global Citizen.

“He’s been a forwardly working horse in the morning,” Hamilton said of Global Citizen, a newly minted three-year-old To Honor and Serve colt. “He’s done everything we asked.”

Including, as it turned out, surprising his rider with an alert break.

“I worked him a few times out of the gate, and he was a a little slow leaving there,” Hamilton said. “He kinda surprised me today that he left there running and really was put to task early on on his own.”

That was fortuitious, since the track during the day was more than kind to early speed runners.

Global Citizen broke well to track the early leaders, Kingston Pike and Two Swords, from third while on the outside. Kingston Pike led narrowly after an opening quarter-mile in 23.37 seconds, with Two Swords in front after the half went in 47.73. But, while Two Swords was working hard, Hamilton was biding his time aboard Global Citizen.

“I was just sitting out there waiting to stomp on the gas,” the rider said. “When I asked him, he just went on about his business.”

Global Citizen finished the race with a flourish, laying down back-to-back furlongs in under 12 seconds apiece to win by a length. Maynooth, the 9-5 post time favorite, rallied up the rail to be second — his fourth runner-up effort in five starts — while Two Swords held third.

Lobkowicz Palace, a Speightstown colt out of Grade 1 Ashland winner Karlovy Vary, also made his debut here, for trainer Graham Motion. Under Feargal Lynch, Lobkowicz Palace made a promising middle move but emptied out to finish fourth.

Bred in Maryland by his owner, Global Citizen is out of the Tiznow mare Tizthen. And he’s yet another promising youngster in the Sagamore colors.

“It’s definitely a pleasure” to ride for DePaz, Hamilton said. “Horacio (DePaz) and Lazaro (Cruz), they really do a great job. When one of them’s not around, the other one’s right there. They’re very on top of their game.”