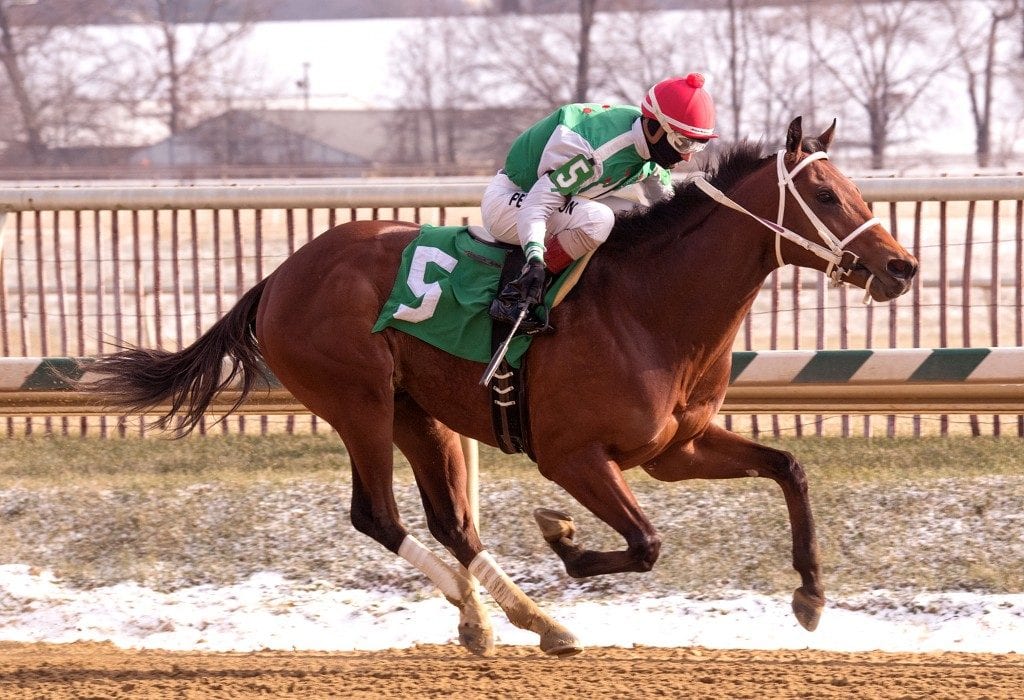 The two-year-old Quality Road colt, off at 11-1 in the Grade 2 Kentucky Jockey Club Stakes at Churchill Downs, got caught in a traffic jam entering the first turn in the 1 1/16 mile test, stumbled, and went down, tossing jockey Frankie Pennington to the ground. For a moment, disaster loomed.

But Diamond King rose and ran on, and today at Laurel Park, horse and rider were reunited to positive effect, winning the $100,000 Heft Stakes, a seven-furlong test for two-year-olds. Now he’s back on the road to bigger things.

“We got extremely lucky,” said trainer Robert “Butch” Reid. “Frank (Pennington) got actually hurt worse than the horse. (Diamond King)  had some cuts but they healed. He didn’t really miss a day of training out of that race, which was pretty rare.”

Today, Diamond King, sent off as the 1.30-1 favorite in the field of six, was on the engine early, dueling along the inside with 9-5 second choice A Different Style through an opening quarter-mile of 22.31 and a half-mile of 45.90 seconds.

Nearing the quarter pole, though, both runners looked to be cooked, with Devine Entry revving up a run on the outside. Devine Entry, with Horacio Karamanos up, surged to the lead and was up by a length leaving the furlong grounds as A Different Style faded, ultimately to fourth.

But, confronted with Devine Entry, Diamond King fought back along the inside and surged to a length-and-a-half victory. It was another eight lengths back to Big Bella Brown in third. Running time for the seven furlongs was 1:24.45.

“When he saw the three-horse, he exploded,” Pennington told Reid as he dismounted.

“I knew it was going to be tough, especially, you’re not sure, you don’t know what to make of his last race,” Reid said. “Did he get anything out of that? Psychologically, you don’t know where they’re at after you get dropped like that. He’s obviously a very smart horse, and he just put that behind him and stepped right up to the plate today.”

Diamond King has now won three of his four starts, the lone exception being the Kentucky race, and he’s done it in three different ways. In his debut, he rallied from fourth to win by two lengths. In his follow up, an allowance at Parx, he dueled for the lead before drawing off to win by a couple. And here today, he dueled, fell behind, and then rallied to win.

“We liked him all along, from the sale,” Reid said. “He was my number one horse at the Timonium two-year-old sale last year, and we were fortunate that we got him.”

Reid’s owners, Chuck Zacney’s Cash Is King LLC, paid a cool $235,000 for Diamond King. By Quality Road, he is out of the Malibu Moon mare Akron Moon, who was a stakes-placed winner in her racing career.

Now, the waters get deeper. A  two-turn race will likely be next. And then? Perhaps some Derby dreaming.

“We’d love to be in Louisville, you know,” Reid said. “Chuck’s already been there once or twice. He’d definitely love to get back. We’re aiming that way, we’re taking that progression. If it works, you know, and if he stumbles along the way, so be it.

“For right now he’s done everything we asked, and distance shouldn’t be a problem.”